Quote of the Week: No going back

This week's QOTW is one of those lines that may be interesting only to me.  Hell, I'd be interested to see if anyone else even caught it.  But it got my attention and gave me something to think about over the weekend:


This is regrettable, but we're absolutely not going back down the rabbit hole and re-complicating the new system to solve comparatively minor imbalances, because the overall cost is just not worth it.

The quote is CCP Masterplan, from the recent dev-blog regarding the new Crimewatch system.  The context of the quote are the downsides of working on an entirely new CW system as opposed to rebuilding or redesigning the old one.  What's "regrettable" in this context is the fact that CCP devs had to break the old system to install the new one... but now that the new one's in place, there will be no going back.

This caught my attention because it's the third time this sentiment has come up from CCP devs this year, using almost identical language each time: this, the AI upgrade I wrote about last month, and the unified inventory system from earlier this year.  In all three cases, we've been told "the old system is broken and there's no sense crying for it because it isn't coming back."  The message is so consistently worded and delivered each time that I have hard time believing it isn't in CCP Unifex's or CCP Soundwave's play-book somewhere.

In an amusing way, it's sort of a preemptive shot across the bow to anyone thinking about starting another summer of rage.  ;-)

But is this a new sentiment in CCP's way of working?  That'd be a no.  Remember when the old fitting window was tossed in favor of the new circular one?  Here's what the old one looked like, in case you've forgotten or have never seen it: 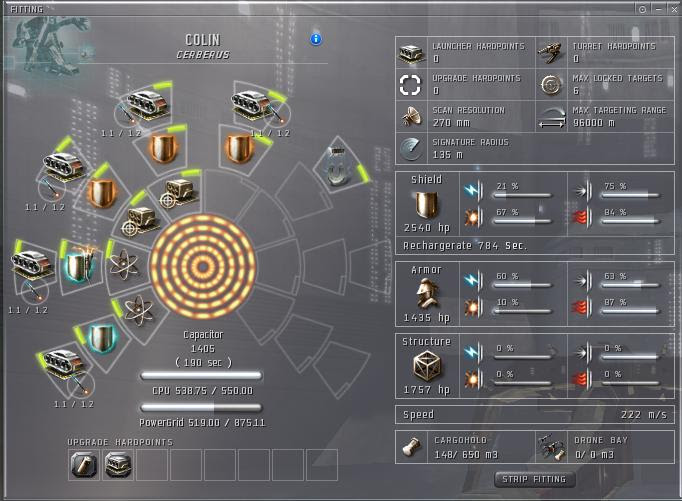 Yeah, it's hideous.  For some of you, maybe that's the first time you've seen that interface, but that's how we fit ships in EVE for a lot of years.  But the player rage when CCP threatened to take away that interface in favor of the current one was terrible to behold.  Ditto of course, when the transition from the old portraits to the new portraits happened.  Lots of players simply refused to create new characters using the tools until they were absolutely forced to and there are still a goodly number of "grey heads" in the database if you know where to look.  CCP pushed that change through over player objections, too.

Matter of fact, the one and only time I can remember CCP backing down once they made a decision to go forward with something was... you guessed it... the summer of rage last year and the micro-transaction plans that caused it.  Even then, CCP was very much pushing a "This is how things are going to go, this is the way forward and there's no going back." position.  Only that time, there was.  And for about a year after that, a little more humility was a way of life in Reyk.

That year seems to be over now.  Will history eventually repeat itself?  I don't think so, but it sure was interesting to see that quote!  Anyway, like I said, this may be an item that's of interest only to me.
Posted by Jester at 3:10 PM