Lots of people have been asking me what I think about the upcoming command ship changes.

It's kind of a long story, and to tell it, I'm going to have to back up a bit.

Up to this point and continuing into the work they're going to do next year, CCP has been very systematic about their ship re-balancing: T1 frigates, then destroyers, then cruisers, then battle cruisers, then battleships.(1)  This is very different from CCP's past approach where they only touched on a few ships here and there and mostly stuck to ships that people were actually flying, ignoring the others.  In the distant past, CCP has been reluctant to iterate on ships that weren't getting flown.  For the longest time, for instance, destroyers were pretty terrible for anything but L1 missions... and ships that used rockets were worse.  But CCP didn't show any interest in re-balancing rockets because "nobody used them."

As a result, we had a nice chicken-egg problem going on that everyone except a CCP developer could see.  ;-)

I kid, but the serious point here is that CCP didn't want to use development cycles on ships or weapons that players weren't using while there were other priorities in the queue that were just as important or more important.  That's how software development works.  Of course, in time players made enough of a stink about it that the obvious problems with rockets and with destroyers were at least partially fixed.  Sometimes, that's how software development works, too.

By now, it's reasonably clear that CCP wants to at least look at every ship in the game.  But that's a hell of a lot of ships.  And they're trying to be systematic.  Once you're done with the basic T1 sub-caps, what do you do next?  There are several options:
Each of the options has its pluses and minuses.  Lots of people fly capital ships and heaven knows all four of these ship classes are laughably broken.  All the recent dread iterations did was render that class even more imbalanced, and the less said about the most recent titan and super-carrier iterations, the better.  CCP has been promising an industrial expansion for several years now and what happened with the mining barges and exhumers wasn't it.  Even if it was, it's ridiculous how easily the current industrial-class ships are blapped these days.  While AFs are looking pretty good, the other T2 frigates definitely are not.  EAFs are still a joke, for instance.  I've already covered how many of the T2 cruisers are being made irrelevant or obsolete by their T1 counter parts, or the tier 3 BCs.  It's hard to find a role for any HAC other than the Zealot, for instance, and obviously the logistics ships are going to need a close looking at.

So it would be easy to make a case for any of these four options: other than EAFs, there's lots of people flying all of those ships and all of them are pretty broken to one extent or another.  To me, the capital class ships are the highest priority of broken, but maybe I'm just too close to that problem to see it clearly.  Still, it's hard to argue with just how bad the Phoenix, Chimera, Wyvern, and Leviathan are.  And the Minmatar capitals are all arguably worse.

But that's not exactly an easy problem to fix, is it?  So it's understandable that CCP would want to save those problems for later.  Maybe much later.  Other than making them require about 28 days less training, I don't think we can expect to see a lot of changes on this front in 2013.  If you were going to go for something relatively easy, then the T2 frigs or cruisers are the logical choice instead.  I'd go with the T2 cruisers because they're the most broken of the two. 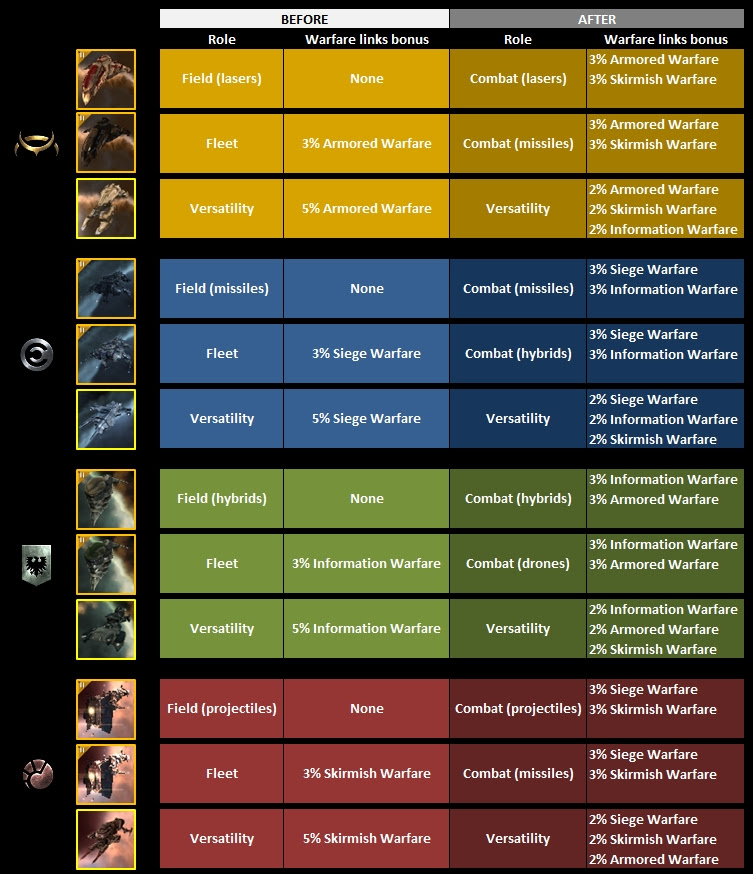 Of course, we now know that CCP has decided on none of these four options and are arguably going straight to something that's going to be even harder to balance than capitals: command ships.  Now that I've laid down the context of past iterations, I think you can see how interesting a choice this is.  What we've got here is a class of ships that relatively few EVE players fly and a class of ships that's going to be notoriously difficult to balance.  It's jumping in the opposite direction of logic, and the opposite direction of past behavior.

Hell, it's quite arguable that command ships were the class of T2 ships that were least in need of iteration.  Think about it.

Granted, T3 links are pretty ridiculously over-powered right now and off-grid boosts and POS-based boosts are being exploited in a big way.  But in terms of an actual large-scale problem affecting the game, it's not an easy claim to make that command ships are the highest priority to re-balance.  That's because aside from a few very specialized circumstances, the imbalances are affecting everyone equally.  It's broken, sure, but it's broken the same way for both sides of a typical fight, and both sides are taking advantage.  In terms of the difficulty of re-balancing, the ships that are avoided -- particularly the Gallente ones -- are going to need a much broader look than a simple iteration on command ships can provide.  Hell, with the Falcon being nerfed and sensor strength being buffed, there's going to be even less reason to use Info Warfare links than there is today.  The one InfoWar link that was used was the one that buffed sensor strength.

Now all that said, the dev-blog makes it reasonably clear that CCP is thinking a little more broadly than this.  Rather than thinking of the ships as "command ships" only, we're apparently being encouraged to think of them as more generic T2 battle cruisers that also happen to have the ability to run links if you want to.  The skills needed to get into the ship are also being reduced substantially.  I don't have a problem with that.  If the prices aren't too ridiculous, it'll be fun to see some HAC Damnations or Claymores mixing it up out there with some blaster Vultures with no links anywhere in evidence.  It seems slightly unlikely... but it's possible.  In much the same way that "Mackinaw" doesn't necessarily mean "warp to the ice belt" any more, we're all going to have to relearn that "Damnation" doesn't mean "you can ignore it until last."  The vets will have to make some adjustments to their thinking.

But initially the area everyone's going to be looking at is using these ships as link ships.  By spreading the peanut butter a little more thinly on the bread, we might see some changes in how these ships get used in this capacity.

But I doubt it.

After all, look at the stats.  As I said, nobody's going to be in a big hurry to fit Information Warfare links tomorrow any more than they are today.  Outside of specific fleet comps, you just don't see very many of them out there.  That means this "buff" isn't really giving the Gallente or Caldari ships anything of use.  Meanwhile, the Amarr and Minmatar command ships are being ridiculously, lovingly buffed to do exactly what players that fly them wish they would do.  I can't tell you how many times I've flown a Sleip with an un-bonused Shield Harmonizing link, or seen four-link Damnations with one (or three) Skirmish links.  Now those links are going to be bonused.  That's pretty huge.  Who's going to fly a Vulture with shield links if they can fly a Sleipnir with shield and skirmish links instead?  Unless the balancing is handled very carefully: almost nobody, that's who.

Meanwhile, if you have a business going in Tech3 Warfare Processor subsystems, you might want to start shutting down that business.  This has already started: there have been fairly marked reductions in the price of this subsystem for Lokis and Legions already.  EVE players insist on the highest possible bonus and now that the Tech3s won't have that, you're going to see players abandon Tech3s fit for this purpose en masse.  Unless players can figure out how to fit these ships to be unprobeable or near-unprobable again, you're just not going to see many being flown except in the smallest skirmish gangs.

And all of this leaves out the problem of breaking off-grid links.  I'm sorry to say I have no confidence in CCP's ability to do this reliably.  There are just too many variables, and all of them are incredibly fiddly.  Hell, a solid percentage of the time, I can't get on-grid links to work today.

So, other than "we're going to have combat T2 battle cruisers and it will be bad ass", why is CCP jumping to this class of ships first?  Is that enough of a reason with so many broken ship classes out there?  Is that enough of a reason with how difficult this iteration is going to be to do?  You tell me.  But that's what I think about this change: CCP has chosen poorly for the first ships to iterate on after the T1 sub-caps.  In my view, just about any other choice would have been better.

EDIT (14/Nov/2012): I'm informed in the comments that you can't target which T3 subsystems you end up with during reverse engineering the way you can with invention.  I wasn't aware of that, and I apologize for the oversight.  Means you reverse engineers are going to be left with a pile of not-particularly-useful BPCs...


(1) With a side trip into mining barges and exhumers, yes, but it's a good bet that CCP is going to have revisit them again, and soon.
Posted by Jester at 12:42 AM