Welcome to the junk drawer, part of a series of monthly posts in which I dump all the stuff that I couldn't develop into full blog posts this past month...

Thought I'd start this month with a couple of related web tools:
http://raynor.cl/eve/index.php
https://adashboard.info/local

They're both intended for scouting.  The first one allows you to copy the results of a directional scan into it, and it parses that directional scan into a useful list of ship types and classes that you're facing.  Just do the copy, run it, then send the resulting link to your FC.  He has instant access to the exact numbers, types, and classes of ships you're seeing.  Quick and easy.

The second one does a similar task for names from the Local chat channel.  Copy-paste into this tool, and it's parsed into useful information about exactly who is in Local.

Both very useful tools!  Bookmark them if you scout at all.

On the same topic, I'm pretty sure I've posted a cargo scan parser before at some point in the past (which aids gankers), but just in case I haven't, here it is:
http://sudorandom.com/cargoscanner

The principle of this tool is the same: copy-paste the result of a cargo scan into this tool, and it will quickly parse the components of what you're seeing and estimate the total ISK value of the cargo.  That will make decision-making much faster and easier on whether you should gank the target or not.  Bookmark that one too if you intend to get into ganking.

This is just pretty damn awesome: EVE's very own Roc Weiler was featured as part of a CNN series of articles about the soon-to-be-the-next-big-thing trend of "gaming + achievements + fitness."  It's a quite well done article, and very much worth your time.  It was even on cnn.com's front page for about 36 hours.  Go read it.

Speaking of EVE bloggers, there was a late September post that I forgot to highlight in the September junk drawer that I want to highlight now.  It's a piece specific to how DUST 514 is going to interact with Faction Warfare from the perspective of GamerChick42, who is actually in FW.  It hardly seems necessary to highlight a blog that I feature as one of the "Must Read Blogs" off to the right, but I'm going to anyway.

GamerChick42 doesn't post nearly enough for my tastes, but those posts are my go-to destination for what FW players are thinking about.

This little post amused the hell out of me.  It's four years old now, but features some really nifty graphics of EVE's original interface and game-play, pre-beta, circa 2000 through early 2002.

I think this one's my favorite, Apocs versus what sure looks like a Hound, from late 2000: 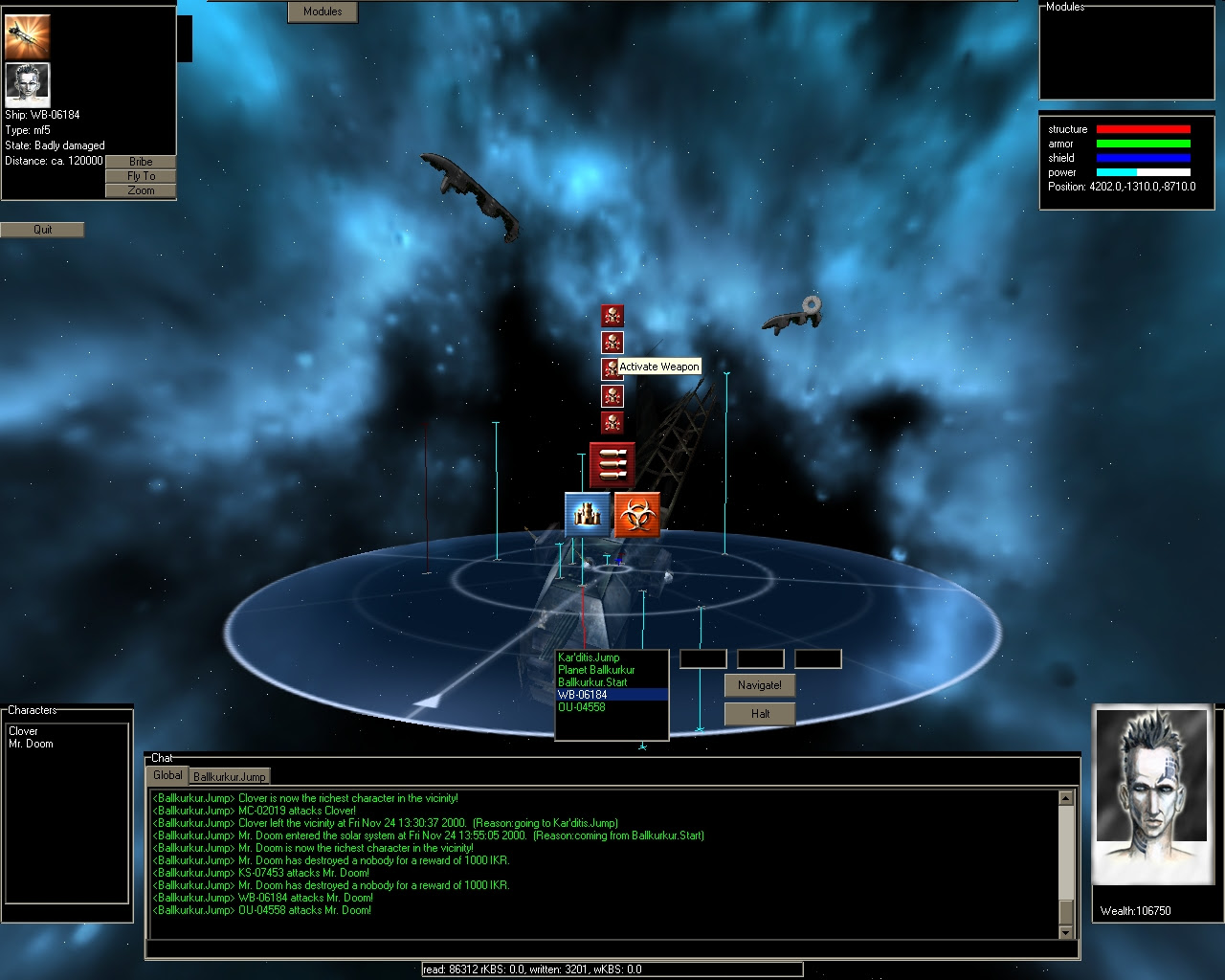 Back to bloggers... sort of.  Telegram Sam, sponsored by CCP and EON Magazine, are having themselves an EVE fiction-writing contest.  Here's the post on the EVE-O forums announcing both the contest and its validity.  Here's the "blog" with all the rules.

Entries are being accepted through December 2.  There are two categories: pure fiction emphasizing EVE's lore, and "day in the life" posts focusing more on actual EVE game-play.  Unfortunately, previously published pieces are ineligible.  As a result, I'm actually rather disappointed that I can't submit "Sons of a Bitch" as an entry for the latter, but who knows, maybe I'll come up with something else.  The prizes aren't half-bad!

Anyone else notice that after December 4, killing someone's ship in low-sec will no longer give them kill rights against you?  It sure looks that way!  Kill rights will only be applied when someone actually picks up a "C" flag, and just killing a ship in low-sec no longer appears to do that.  Podding someone?  Yes.  Killing their ship?  No.

I might be mistaken about this, but I don't think I am.  And it means that kill rights are going to take an entirely new course for Retribution and beyond.  But I thought about the implications for a while and couldn't come up with a whole blog post about it.

Has anyone ever tried to make an actual go of "cashing in" on a kill right up to this point, or is this pretty rare?

And that's all for the junk drawer this month.  I'm about three posts behind where I wanted to be this week, but wanted to clear out the drawer before I got to them.  I still have something to write about tug-of-war sov, and I've promised myself that I'm going to get part 3 of the Implant guide out before Sunday.
Posted by Jester at 4:59 PM