While you're waiting for 1.54GB to download -- maybe several times -- check out the new Retribution trailer.  I got a kick out of this one.  "Short and sweet" doesn't even cover it: this one's a neatly-wrapped chocolate candy.  Purely from a visual stand-point, it's quite well done, showing off EVE's missile effects, the new destroyers, the new Venture mining frigate, and the new Stabber model as a drop-in.  All in all, very clever use of Retribution's new ships!  The visual of the docked Widow is also quite nice, and the uncanny valley is kept to a minimum.

I think my favorite single bit was watching Hammerheads launching from the new Algos destroyer, something we'll never see like this in game: 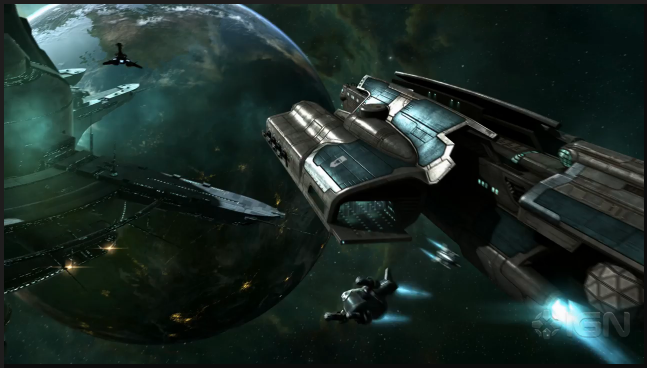 I think all of us have visualized drones or fighters launching from our ships this way at one time or another.  ;-)  So overall, the new trailer has a nice impact, but my first impression was that something was missing.  And it took me a couple of hours to figure it out.  But once I did, now I can't unsee it... or unhear it in this case.  "Today, Vic is about to get caught by the most savage hunter of them all... me," the trailer says.

On the positive end, five out of the six are ships that new players can fly soon after they start playing the game.  On the negative end, though, the subconscious impression I got was there's one guy at the keyboard multi-boxing those six ships!  So while the trailer is pretty good, I think I would have taken it a step further.  Instead of all those destroyers, I think I would have emphasized Retri's new player aspect, showed the Widow under attack by 15 or so cruisers.  Voice-over, "Today, Vic is about to get caught by the most savage hunters in New Eden... all of us."  Half the cruisers get blown up or shaken off, but the other half succeed.

And then you see 15 wallets go up by 30 million or so each... some of those wallets starting from quite low values.  I think that would have been fun.

Still, it's a minor nit in what's otherwise a very nice trailer.  And I want that cyno effect, please.  ;-)

Enjoy your first day with Retribution!
Posted by Jester at 6:32 AM