And now, an EVE term definition for the newer EVE players.  You vets can move on to the next post.

From time to time in EVE PvP circles, you'll be told to "get into a skirmish ship" or you will hear about skirmish tactics.  At its most basic, EVE skirmish tactics are the use of long-range DPS along with ships using bonused points or webs in order to inflict kills on a larger -- often much larger -- enemy gang.  In short, skirmish tactics are essentially guerilla tactics but applied in a specific way to reduce risk to the skirmish gang and maximize their chances of getting some kills.

The specific definition of "skirmish ship" has been changing over the last year or so as the game evolves.  However, the basics of a skirmish gang remain relatively unchanged: you need a central core of high volley, medium- to long-range ships such as Tornadoes, Oracles, and railgun-fit Nagas.  To that, you add one or two long-range point ships (usually a Lachesis), one or two long-range web ships (Rapiers), and a small number of heavy missile ships, usually Drakes.  To this basic composition, you then add usually one logistics ship (nearly always a Scimitar), one light interdictor, and a pair of anti-tackle ships (these used to be Vagabonds, but these days Zealots are becoming more popular).

The default "skirmish ship" used to be a Drake or an artillery-fit Hurricane and indeed, the tactics were built around small- to mid-size Drake/Cane fleets.  Typical skirmish engagement range used to be about 50km or so but with the increasing numbers of ships that can counter at that range, the range of skirmish tactics has been increasing to approach 90km and that has put standard Drake/Cane skirmishers out of business.(1)  Still, while Hurricanes are now more or less unheard of in skirmish fleets, Drakes still maintain a role as "PODLA Drakes" fitting double webs and protecting the rest of the fleet -- often at the cost of the Drakes...

Skirmish ships must be nano-fit, and must be able to hit at long range, which is where the new tier3 battle cruisers excel.  A skirmish fleet will attempt to engage its prey off gates at the 70-90km range mark.  Most often, you will encounter a skirmish fleet either already sitting this range off a gate, or burning at high speed off a gate as you enter a system behind them.  The entry gate itself will quite often be bubbled by the dictor who has already done this job and then cloaked up about 20km off the gate.  The entire remaining group will be burning at 2000-2200m/s or so, depending on exact ship, fitting, pilot skill, and implants.  The logi, Lachs, Rapiers will be 15km behind the main mass.  The Drakes and anti-tackle ships will be 10km in front of the main mass, like so: 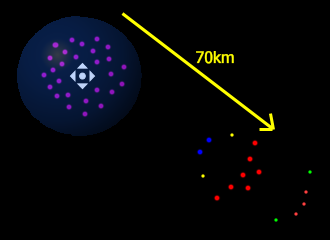 The white graphic represents a stargate.  Purple dots represent your fleet, which will generally outnumber the skirmishers by 2-1 or more but will often start the engagement bubbled by the skirmish dictor.  Large red dots are Tornadoes, Oracles, or Nagas.  Large blue dots are Drakes.  Small yellow dots are anti-tackle (Zealots, Vagabonds).  Small red dots are two Rapiers and a Scimitar.  Small green dots are Lachs.

The skirmish fleet will give its enemy two choices, both of them bad: either burn back to gate (and in so doing lose several slower ships as they burn back to the volleys of the DPS ships) or try to burn after the skirmish gang.  The former will guarantee the skirmish gang some kills and no losses.  The latter is dangerous because it reduces your transversal to the skirmish ships AND you have to push through Drake and Rapier webs in order to reach the group's main DPS.  Either way, even if you outnumber the skirmishers by a sizeable margin, their high speed and positioning will guarantee that you lose several ships no matter which of the two choices you make.  Many FCs, seeing their large advantage in numbers, will simply accept a small number of lost ships as acceptable tactical losses in an attempt to inflict losses on or to break up the skirmish group.

The skirmish fleet, meanwhile, will attempt to hold its range advantage with higher speed.  Certainly the group has a single logistics ship but that ship's role is to keep the Recons alive, not the DPS ships.  Any DPS ship that is primaried will be expected to burn out of tackle range and warp off to a nearby location and then return to the fight as quickly as possible, warping back to a friendly pilot already at the correct range.  A correctly-run skirmish fleet will show this dynamic: the ships you primary will warp off, you'll primary a new ship, that one will warp off, you'll primary a third ship, that one will warp off.  Meanwhile, the first ship you primaried will return (warping back to one of its brethren that has been burning away from your fleet) and rejoin the fight.

And that's a skirmish fleet's main drawback: a skirmish fleet tends to be small and as a result, any mistake made by any of its pilots will probably guarantee that ship is lost.  If a pilot warps in too close or doesn't burn hard enough away, it will be killed.  If it burns away too hard, it won't be doing any DPS and the skirmish fleet won't get any kills.  The anti-tackle ships must be on the ball striking down any interceptors attempting to tackle any of the skirmishers.  The Drakes and Rapiers must likewise be on the ball webbing down anything heavier that attempts to tackle a DPS ship.  Due to their forward positions, the Drake pilots must be particularly careful.  And if the enemy gang has a Lach or an Arazu of its own, the skirmish fleet will lose a ship or two regardless of what the skirmish fleet FC does unless the pilots pointed by the enemy Recons make no mistakes.

Regardless of what the skirmishers do, if a larger fleet under attack skirmishers pushes its numbers advantage hard enough, sooner or later, they will break the skirmish fleet's perfect formation.  At that point, the skirmish FC will probably call for the entire group to warp off.  Whether they can do so will greatly depend on if the skirmish pilots have made any mistakes.  If three or four tacklers have infiltrated the skirmish group, for instance...  On the other hand, if all or the majority of the skirmishers get away, they will attempt to reset the trap in "the next system" along its path of advance and the dance begins again.

In short, operating in a skirmish fleet demands near-perfect flying from every pilot involved: any mistakes will cost the pilot that makes them their ship.  And if the skirmish FC loses enough DPS ships or loses even one or two special teams ships, the skirmish fleet will have no choice but to avoid any engagements and run.

So the good news is that a properly-run skirmish fleet can successfully up-engage fleets of two, three, or even four to one and successfully get kills.  The bad news is that such a fleet is always flirting with the ultimate disaster that will result in their deaths.  ;-)  This is an extremely fun and challenging way to play EVE.  If you're going to try it, make sure your fleet composition is up to snuff and you'll probably want to practice it a little...

Occasionally on Sundays, I will be defining a common EVE term for those who might not have heard it.  If you have a suggestion for such a term, please drop it into the comments.


(1) As a matter of fact, the Hurricane has now been pushed out of most roles and its sales volume is down more than a third over the last year, but that's a different story.
Posted by Jester at 9:53 PM