I talked at the end of December about MukkBarovian joining Pandemic Legion.  Well, he managed to lose a fight a couple of days ago that I think is really instructive about my skirmish tactics post from Sunday.  And the battle also features Alekseyev Karrde, so it's sort of a triple threat in terms of topics I like to talk about: EVE tactics, personalities, and ship fittings.

Let's start with the battle report, and I'm going to use the PL one:  Battle of QHJ-FW.

Since this isn't a typical eve-kill BR and because some of you might not have looked at PL BRs in the past, I'll explain it.  Forces hostile to PL are on the left, PL is on the right.  Ships in red were destroyed, same as eve-kill.  So you can see here that PL only killed one but lost 16, to a good size Black LegionDOT fleet.  Of the 16 lost ships, ten were BUSA so this was probably a Mukk op that a few PL pilots jumped in on.  The skirmish ship in question is a Naga, and it's a type of ship I've seen Mukk FC before BUSA joined PL; it's a fine skirmish ship:


There was a little bit of variation on rigging here and there: some PL pilots used Hybrid Collision Accelerators or a third CDFE, but that's the basic fit.  And as I said, it's quite a good skirmish ship.  Fit this way and using Uranium or Thorium ammo, it has a 75km base range or so plus a 30km fall-off, putting it right in the 70-90km wheelhouse of modern-day EVE skirmish tactics.  DPS per ship is 520 or so and the PL fleet had sixteen of these ships.  That's slightly less than an equivalent Tornado fleet (with far less alpha) but the guns cycle far more quickly, every five seconds or so.  So if you can coordinate your target calling, you can rack up kills with this type of ship faster than with the equivalent number of Tornados.  In addition, Nagas don't have the reputation that Tornadoes have, so people will be more willing to fight them.

Downside: this fit requires a 1% CPU implant.  If you're PL, I suspect you fix that with Genolution implants.  ;-)

The rest of the fleet is nearly exactly out of the skirmish playbook that I listed on Sunday: dictor, Lach, long-range web (Huginn in this case), Scimitars.  You can see them mixed in with the Nagas on the right hand side.  There were probably a couple of other PL recons that got away because I suspect they had at least one Rapier and another Lach or Arazu along, too.  The PL fleet adds a Broadsword for a heavier bubble which is cool for gate ganks; it's tougher to use in actual skirmish tactics because an active bubble slows you down quite a bit.

So, a PL skirmish fleet is out there.  Why did they die?

Check out the opposing comp.  Mostly Oracles, a few Tornados, a couple of Lachs of their own, and -- holy mother -- nine Stilettos, plus a dictor of their own and some reps.  Where have we seen that kind of comp before?  Well, it's a variation on the BricK sQuAD. Oracle that I posted last year, only this is the shield version.  Downside to the Black Legion version?  Shorter range.  But it's faster, almost a skirmish fleet in itself, except for those inties.

When I talked about the Brick Squad Oracle, I mentioned a fleet tactic I called "reverse skirmishing", which I now think of as "anti-skirmishing" or "counter skirmishing."  Here's how it works: 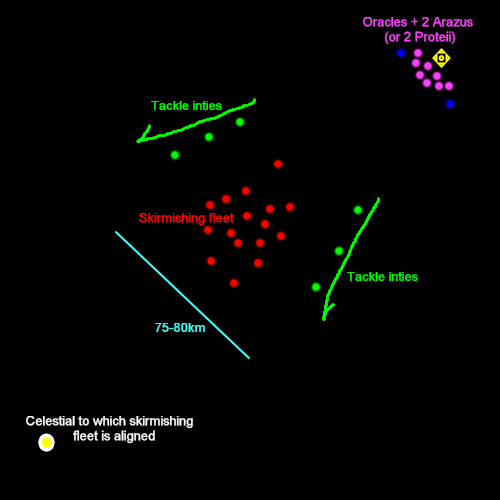 This time, the skirmish fleet is in red.  You jump into a system to find them burning off gate, about 50km away from you burning toward a celestial off in the distance.  Your fleet is mostly Oracles on a gate, plus a couple of long-range points provided by Lachs, Arazus, or long-point Proteus cruisers depending on if you use shield or armor Oracles.  To this you add your own rep and your own dictor or two (if in null), plus a Skirmish Warfare link ship in system.  Also with your comp are lots of inties, in green on this graph.

As the skirmish fleet burns away from you toward the celestial, you form up your group on the gate.  Your dictor cloaks up and aligns to the skirmisher celestial.  The long-point ships point or scram the closest stuff.  The tackle inties sweep on either side of the skirmishing fleet within about 28km or so of them with overheated, linked points.  The Oracles are capable of burning stuff down all the way out to Tornado range of 80km or so, and have enough tank that they can withstand a bit of alpha.  With the inties sweeping past the skirmishing fleet at angles of 75 degrees or more, they'll be very tough for the skirmishers to damage.

The Oracles and ships with them, meanwhile, align to the same celestial as the skirmishers and chase.  Since they're slower, they'll eventually lose the range.  But they'll have a minute or two to rack up some good kills and with their reps, will sustain few or no losses themselves.

Eventually, the endangered skirmish fleet warps off to the celestial they've been aligned to.  At that point, the dictor (if present) decloaks and warps with them, followed by a portion of your fleet and a few of your inties.  The rest stay to finish off the poor sad sacks who were pointed by your inties or your long-point stuff.  If you're fortunate, meanwhile, the forward fleet of some of your DPS, inties, and a dictor will land on the celestial not long after the skirmish fleet does so.  The dictors bubble up (if possible), the inties that followed point a few more things there and pretty soon you're fighting a classic split-fleet engagement right out of the Horatio Nelson playbook.

Needless to say, this ends badly for the skirmishing fleet and that -- according to Alek -- is what happened here.  Mukk or whomever was FCing at that point picked the wrong celestial, the Black Legion FC ordered his inties to follow, and those nine Stiletto pilots earned their pay dropping a welp on Pandemic Legion.  Thanks to Alek for a little bit of information on how this went down.  For those of you wondering how to hard counter a skirmish fleet?  This is one way to do it.

Finally, one of those little points of trivia that's interesting only to me: one of the Stiletto pilots in this fight was my very first CEO in EVE Online.  I guess he's become a somewhat better PvPer since I knew him waaaaay back when...
Posted by Jester at 4:24 PM