Kill of the Week: Overly aggressive

Let's start with a few house-keeping chores, then jump straight into the situation that prompted a themittani.com writer to write this little bit of massive irony:


Nearly ten percent of EVE players logged in were in Asakai, most of them fighting the CFC.

First, an honorable mention.  This Tengu was very nearly KOTW.  I was gonna call the post "Kill of the Week: Venture top damage" because I figured that would never happen again.  This kill makes me smile on all sorts of levels.  The Tengu fit is almost silly bad, for one thing.  Medium Ancillary Shield Booster?  Really?  It's a five-gun, meta 100MN AB non-faction bag of fail.  Then to top that off, it gets killed by a fleet made up of a majority stake of Ventures and Reapers, with just enough mining barges and haulers to elevate that theme fleet to the realm of the epic.  That's just glorious right there.  So congrats to Talocan United!  Nice little kill and until Friday or so was gonna be KOTW.

No, your eyes aren't deceiving you.  That's two identical Bhaalgorns, both stupid expensive, both dying in low-sec on consecutive evenings to very similar FusionDOT gangs.  I chatted with one of the pilots involved with both kills, who was kind enough to share some of the details.  In the first death, the pilot involved realized he was being chased, logged out, but then logged back in in a position where the Fusion gang could tackle him.  The Bhaal burned off the gate apparently intent on neuting or webbing off tacklers and getting in a kill or two before warping off, but it didn't work.  Straightforward gank.  The Fusion gang asked the Bhaal pilot if he was angry and he replied, "no, just overconfident."  Good on him!  He clearly wanted to fight, and I can tell you that doesn't happen often.

The second night, similar story.  The Fusion fleet scout spotted the same guy in a nearby system again with a Bhaal on scan.  A chase ensued.  First to catch the Bhaal was a Cynabal and a Falcon.  Apparently confident that he could neut or web the Cynabal off him even under Falcon jams, the Bhaal burned off the gate instead of burning back.  However, the Bhaal's attempt to push the Cynabal off him failed and the two ships managed to slow down the Bhaal for the Fusion gang to again land on him and kill him.  Props to SuperstarBiH!  Tackling a Bhaalgorn in a Cynabal is a very risky proposition.  A max-skilled Bhaal pilot with overheated Fed Navy Webs can apply those webs to 36km... coincidentally the same range a Cynabal with a Republic Fleet point can keep the Bhaal pinned.  If those three neuts land, the Cynabal is capped out in a single cycle.  So that must have been some very good flying on SuperstarBiH's part even with jams on his side.  Well done!

Number of dead super-caps this week: 12

Of course, the big news this week was the massive super-cap battle in Asakai where no fewer than nine super-caps were lost: three CFC titans, five CFC super-carriers, and one Pandemic Legion Nyx.  EVE News 24 has great coverage of this one, including three videos.  Unsurprisingly, themittani.com also has the story.  Equally unsurprisingly, theirs tries to spin the story in the least damaging way possible, and it's the source of the quote above.  Both versions cover the basic facts but for reference, I'll summarize my understanding of them here.  If my facts are mixed up, please let me know in comments!

Gallente Militia had reinforced a small Caldari Militia POS orbiting a Cobalt moon.  The Goon FC, Dabigredboat (DBRB), apparently decided to use a sub-cap fleet to hot-drop the GalFed fleet and kill what they could, then pull back.  The Goon fleet gathered around the Titan belonging to one of DBRB's alts.  Unfortunately, as sometimes happens, DBRB hit the "jump" option in the right-click menu instead of the "bridge" option and the GalFed fleet was presented with a Leviathan in their midst!  GalFed had suspected that a Goon hot-drop may be in the offing, though, so they had many dual-point hictors at the ready.  These immediately pounced on the Lev.  DBRB immediately called on the prepared Goon fleet to assist and a temporary Titan bridge network was set up to accomplish that.

By that time, GalFed had called in Pandemic Legion to assist in killing the tackled Titan, having warned them in advance that the Goons might be coming after them.  DBRB, seeing this -- he was in the tackled Titan, after all -- changed the nature of the op from "rescue me" to "kill PL super-cap fleet!"  This aggressive move brought in what was probably a good size fraction of the CFC's capital fleet of supers, dreads, and carriers.  For a while, CFC had local superiority, including enough DPS to both down the PL Nyx and reportedly for DBRB's Lev to jump out, get repairs, and jump back in with some of the CFC reinforcements.  That might be misinformation, but I heard it from a lot of people: DBRB's Lev got out, then came back in.

Meanwhile though, PL wasn't taking this escalation lying down and they called in everyone who was willing to "come kill Goons!"  And that, it turns out, was a lot of people that included a 50+ strong Black Legion dread fleet heavy on high damage Moroses and a TEST fleet more than 500 strong.  CFC rapidly lost local superiority and after that, CFC supers started dying at a rate of one every thirty minutes or so for about four hours thanks to the 10% TiDi that the system operated under for the rest of the night.  By the last couple of hours, the CFC orders were pretty clearly "GTFO if you can."  In the end in addition to the eight supers, 40+ dreads and 20+ carriers couldn't. 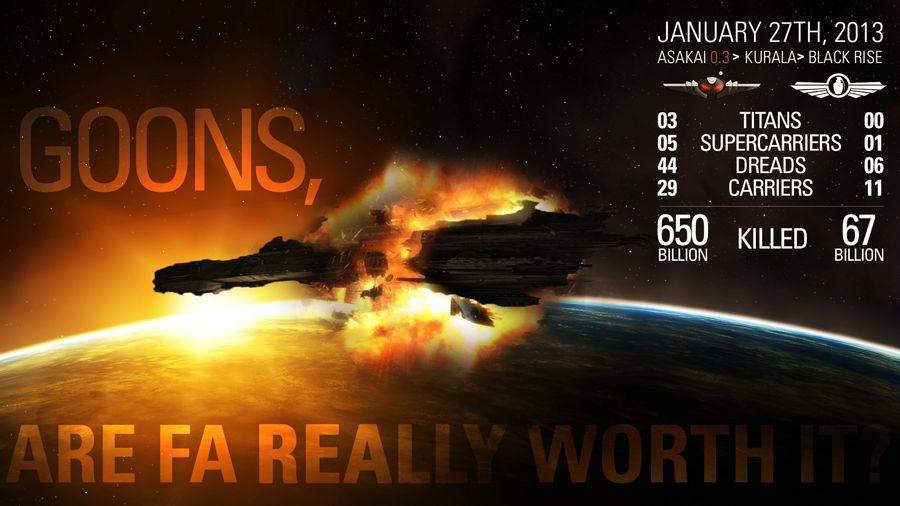 Final tally of losses on the CFC side is going to be something like 800 billion ISK... or put another way, the output of 12 tech moons for more than a year, if my math is accurate.  Even if you're the CFC, that has to hurt a little bit.

Is this going to have an impact on CFC/HBC relations, or even kick off the anticipated war?  Not a chance.  This was one of those random situations that completely escalated out of control of both sides.  Both sides are going to look at it, think "what the hell just happened there?!" and go on with their lives.  But in the meantime, DBRB is out of the capital FC business and Goons -- Goons! -- just became a bit more risk averse.

Right.  Other super losses this week?  That started with this Nyx, who I guess was taking pretty screen-caps of his ship.  Because word around the campfire was that he kept logging in, decloaking, cloaking, moving around a bit, logging back out, logging back in, et cetera.  This was sufficient for the PURPLE HELMETED WARRIORS fleet to probe down his safe-spot, land in time to watch him cloak up in it, then warp in a sub-cap fleet to spread out, eventually successfully decloaking him.  Nice work!  Dead Nyx.

Next up, this Nyx snuffed out by Snuff Box.  I don't know how this one was caught but to me the interesting thing about this kill isn't the catching so much as the keeping.  That part was done with the some of the increasingly well-regarded neut Legions.  I really must make that a FOTW here before too long.  Congrats to Snuff Box!

Last was this low-sec Nyx, this one killed by a combined GalFed / Pandemic Legion fleet.  Word was that he was sitting outside a POS shield doing... something.  That "something" was quickly changed to dying when a (for PL) small super-carrier fleet landed on him.  Gallente and Minmatar Militias provided the tackle, proving that Asakai isn't the only system in which PL will accept sub-cap support help from FW pilots.

EDIT (28/Jan/2013): There's more detail on this kill in the comments below.  Look for the comment by Markius.  Thanks for the information!

All in all a pretty busy week!  But not a record.  That still stands at 14 in a single week, or two per day.  Also, as I was writing this post, I realized that I forgot to do a KOTW post for last week!  Oversight on my part.  Here's the money bit:

But it's really short.  Just this Nyx dead to a Rooks and Kings hot-drop.  R&K gotta R&K.  The most entertaining thing about the kill-mail are the lows.  I have no idea what the thought process was here, but a dumb person and his super-carrier are soon parted.  Which also describes the other Nyx that died last week... helping a handful of sub-caps gate-camp!?  WTF?  TEST took care of that, putting enough bubbles around it to choke the system.  ;-)  Here's the video.  It's pretty amusing until the pilot taking it got himself killed.  Needless to say, the gate was soon no longer camped...

Lots of overly aggressive pilots this week and last!  I like it!
Posted by Jester at 10:37 PM