What are you doing to that strawman?

I'll make this quick because I want to get a much more important post finished and out today. 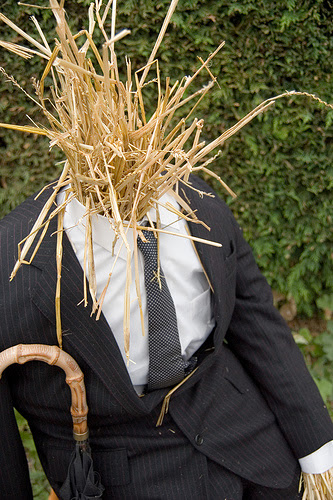 From time to time, I am accused of writing incendiary rhetoric aimed solely at getting people worked up and generating page views.  It's an argument that I find kind of amusing because I don't accept advertising and I'm not paid by the hit.  Granted, having a lot of readers is gratifying but I wrote this blog just as much back when I was getting 300 hits a day and I'll continue to write my stuff if it ever goes back to that.  I'm motivated by the fact that I like to write, my visitors (whether few or many) seem to enjoy what I write, and I like having an influence on the game we all love, not by the number of visitors I get.

Still, for all the times I'm accused of writing something inflammatory in a deliberate attempt to get people riled up, it's amazing to me how it's never recognized on those very rare occasions when I actually do it.

A couple of days ago, I finished reading the comment storm that I generated for daring to hold the opinion that CCP is conflicted about the nature of their own game.  People have asked me if I'm done with the CSM Minutes.  To you, I say: I've barely started on the CSM Minutes.  ;-)  In particular, I haven't written word one yet about far and away the most important section of the Minutes.  That starts today.  Look for that post shortly; it'll be called "Fractal".  But I've been gently leading up to it through posts like the "Conflict of self interest" post and the post I wrote highlighting some of the comments from that post.

In those comments, I was struck by just how many people brought up three factors:
Given that high-sec gankers are suppressing the way their targets want to play EVE and regard those ways of playing EVE as somehow sub-human, the irony of the last point was not lost on me, I assure you.

So I chose a comment that I thought summed up all three points and wrote the COTW post describing that perspective.  But then I decided to be a bit provocative and inserted a couple of subconscious references to those with enormous power preying on those without it.(1)  And then, just to really put the icing on that cake, I titled that one with part of the most incendiary quote from that comment I could find:


The Carebears need teeth.  And frankly, the PVP guys need to get their faces kicked in a bit to realize that ganking a freighter or an exhumer isn't PVP and never was.

I added a bit of sarcastic banter, because that's what I do, then I topped the whole thing off with the following paragraph which absolutely nobody seems to have read:


Am I exaggerating to make a point?  Maybe just a little.  But... just maybe I'm not exaggerating at all.  This sort of thing happens every single day in EVE and most of us have just come to accept it -- and the cost it wreaks in player unsubs -- as part of the game.  The question that started the philosophical debate: should we?  I still don't know.

Emphasis at the beginning mine.  Amusingly though, that very last line is literally the one and only opinion that your humble narrator expressed of his own in the entire piece:


I don't know if we should accept, on a completely unlimited basis, that "the strong may prey upon the weak as much as they like" as part of the game.

And just maybe, neither does CCP.  More on that in "Fractal".

But my comments thread turned into a river of flame anyway.  ;-)  It's up close to 150 comments now and still rising.  They're coming in faster than I can read them in detail and think about them.  I'll likely have time to do that this weekend.  It's started a Reddit thread, launched thousands of words of blog and forum posts, and both rage and agreement with "what Ripard said" from one side of New Eden to the other.  Two bloggers in particular wrote what are practically massive scholarly treatises about what they think they read, or maybe what someone else told them I wrote.

Problem is, they're viciously attacking a strawman while I stand 20 meters off with my hand in the air saying, "Ummm... guys?  I'm over here."  Nobody seems to have actually read what I actually wrote.  It's really rather epic.

"Obviously Jester approves of this position because he chose it as his COTW.  Duh," the counter-argument might go.  Nope.  I've chosen COTWs that I disagreed with lots of times.  It's never been a problem before.

For the record:
And know what?  My COTW post didn't argue in favor of those things.  Go read it again if you don't believe me.  Anyone who is curious about my own current EVE play style should go ahead and read the post I wrote last year called, of all things, "Play style".  That sums it up admirably.  I wrote it, quite ironically, during a time period where I was being accused of being a bully myself.

The other thing I find quite funny about all this: absolutely nobody burning me in efigy has expressed any disagreement with the basic fact I presented in the post: the gankers involved have all the power in this relationship and are preying on players vastly weaker than they are.  That was a fact, not an opinion.  The response I'm getting from those defending that position appears to be "Yeah?  So what?"

So I'm asking if that's how we, as EVE players, want the game to be.  And in so doing, I obviously wish to totally and forever destroy every aspect of their EVE play style.  Obviously.  Someone let me know if that strawman screams in pain or something, will you?


(1) Those who truly do have massive moral objections to my oblique references to slavery and rape should really go into the game you're playing and review the history of the Amarr and Ammatar factions.  And then when you're done, presumably never fly Amarr ships or use their technology ever again.
Posted by Jester at 2:02 PM