CCP Fozzie has a new dev-blog out, folding all of the threads from Features and Ideas (which I've covered on this blog already) into a single post detailing all of the changes in one place.  Go check it out if you like.

Still, one quote in this dev-blog made me smile:


With these eight ships we are faced with a unique balancing challenge compared to the smaller classes. With Cruisers and Frigates the gap between the highest and lowest tiers was rather immense, and the plan called for bringing all of the ships up to around the power level of the highest tier.

You don't need to read on to see if Fozzie says the plan was the same for BCs, because it clearly wasn't.  Frigates and cruisers, by and large, all received large buffs.  The BCs?  Not so much: as I've already covered, all eight of the BCs are being flattened at around the level of the old Harbinger, not the old Hurricane.  ;-) 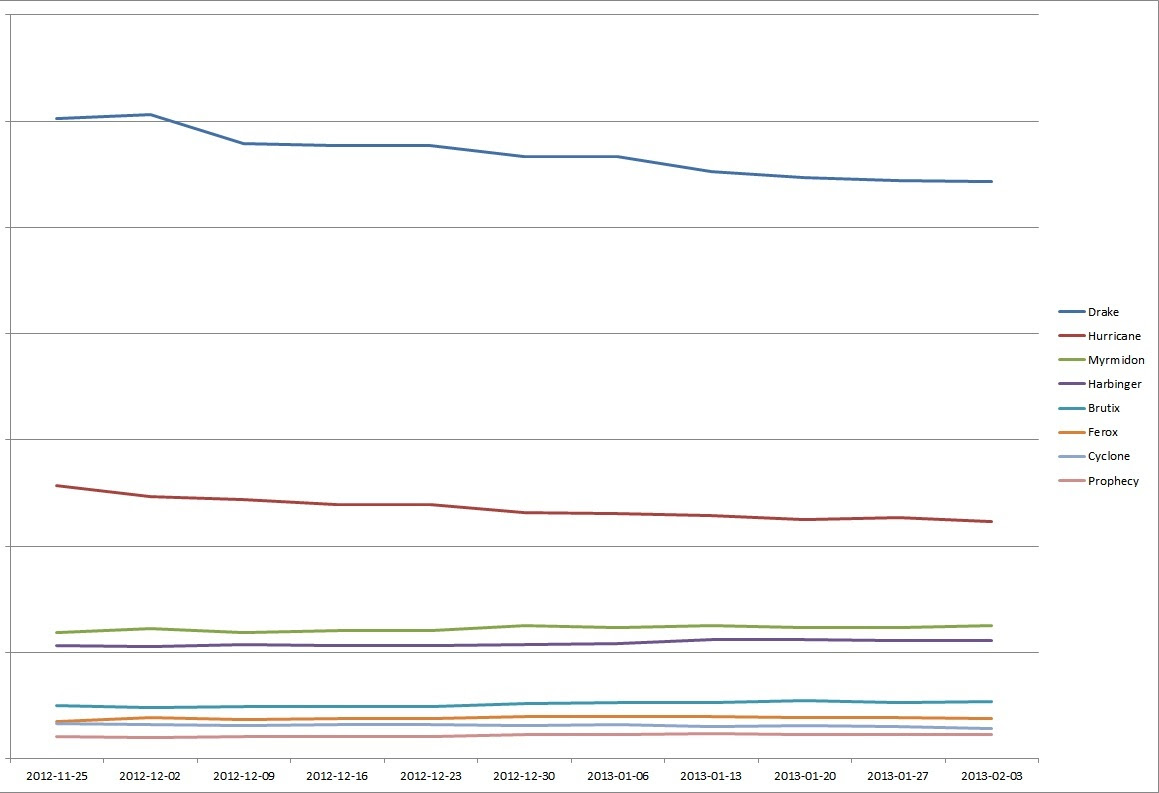 Unfortunately, this graph is about as useful as a city map with no street names, providing the general sense of how things are progressing, but no numbers and no scale.  Maybe there are five times as many Drakes as there are Feroxes (scale 2).  Maybe there are ten times as many (scale 5).  Fozzie did say in public somewhere how much Drake and Cane use are down in percent, but I can't find the post and it's not in this dev-blog.  Dear Heaven, do I miss CCP Diagoras.  Why is CCP so afraid to share hard data with its players?

The third thing that's interesting to me about how the BCs have been rebalanced is significantly more positive, though.  In previous "little things" sort of changes, CCP has altered course very little based on player input.  Usually, if a dev said something in a forum post or in the CSM minutes, you could count on that being that for that particular change... even if that particular change happened months down the road.  You'd get the forum post in January, then the dev-blog in May, and then the feature would drop in June and what the players or the CSM said from January to June made little to no difference.

I might bitch about the nerfing of my favorite ship class, but even I can't deny that CCP came into this with a vision of where they wanted to go, but allowed the specifics of how that vision would be implemented to be tweaked by player input.  In particular, when Fozzie was reminded that BCs need to be able to carry gang-links occasionally, that merited wide-ranging changes right across the BC line to accommodate that input.  If you think about past CCP behavior, that's rather refreshing.  Don't get me wrong.  I'm still annoyed my Canes got nerfed so hard and I'm generally annoyed that the level of awesome of the BC class has been lowered from 9.0 to 7.5 on a scale of one to ten, but it's hard to argue with the process that got us here.

Still means I have to buy a pile of Brutixes to replace my Canes, though.  Anybody have a pile of them they don't want?  ;-)
Posted by Jester at 11:43 AM