Know what?  Chances are pretty good you missed some of the best EVE tournament matches in a long, long time.  Syndicate Competitive League Day Two was today and the good news was many of the matches were fantastic.  The bad news is that for most of the day, there were only 575 or so people watching (it peaked at about 750 during TEST Alliance's matches).

That's a pity, because one of the matches featured what I believe is the closest finish in EVE tournament history (look at the clock): 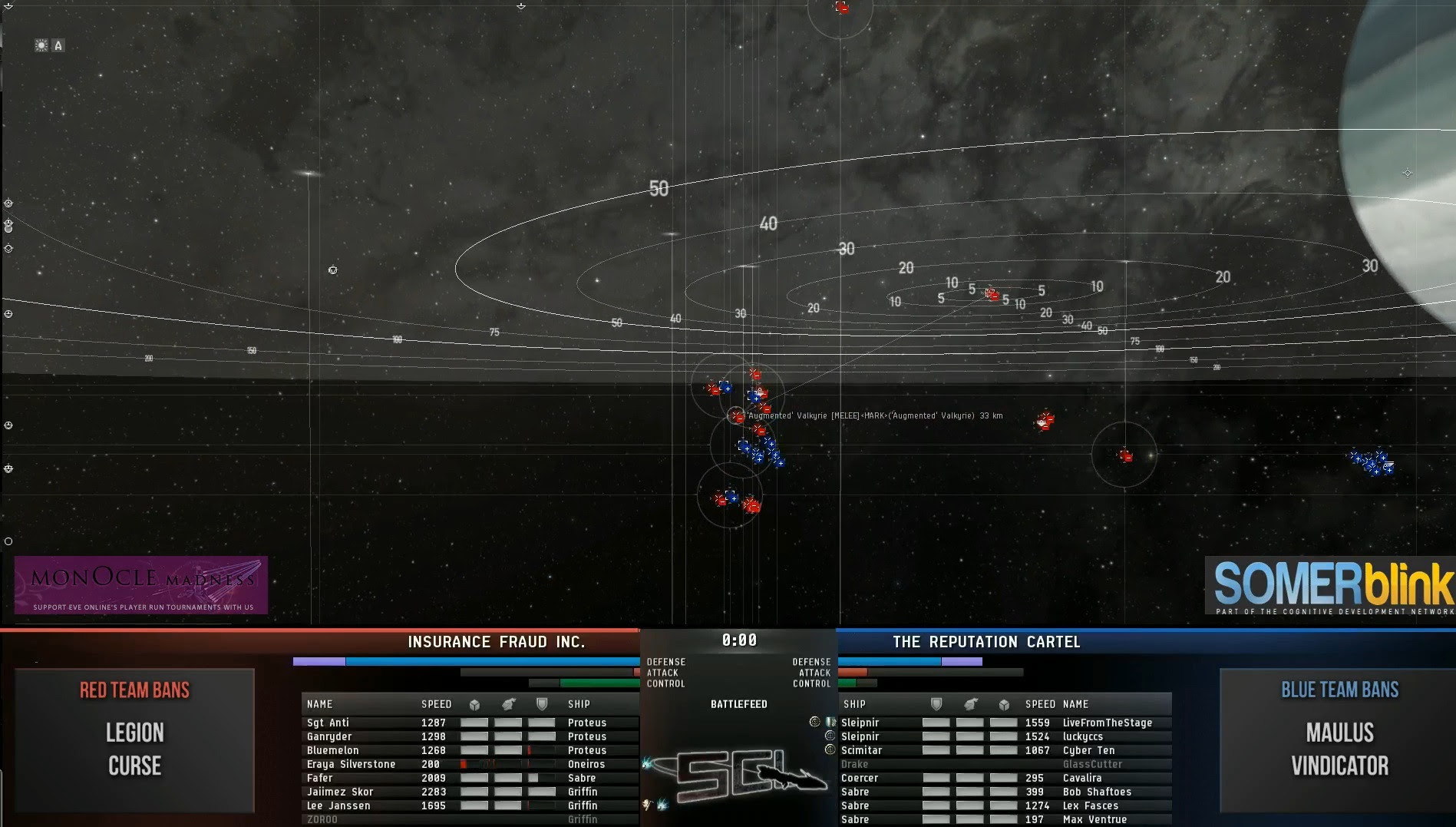 The winner's bracket in the SCL, unsurprisingly, was dominated by the Hydra Reloaded-heavy Warlords of the Deep team.  Needless to say, that team won in the end.  They were so much stronger than the other teams that I didn't feel like any of the other teams could seriously challenge them.  Hydra has simply shown that they excel at the prep stage, and often, tournament matches are decided in that prep stage.  Hopefully, we'll see some strong teams in follow-on tournaments.  So yeah, the winner's bracket wasn't very dramatic.

The loser's bracket, though?  There were some fantastic matches in that one, including Match 12 between The Reputation Cartel and Insurance Fraud Inc.  In that match, hard-fought very close matches eventually came down to a tactical maneuvering match.  On the IF side, triple Proteus plus Oneiros, the ultimate brawl team.  On the RC side, Minmatar speed setup with a Drake instead of a Cyclone, a great kiting team.  The teams danced and danced trying to find tactical advantage and it was a virtuoso display of tactical maneuvering from both sides.  During this period, the RC team lost their slowest ship, the Drake in exchange for a IF Griffin.  But in the final few minutes of the match, the RC team managed to isolate and tackle the IF Oneiros.  Kill the Oneiros before time runs out, Reputation Cartel wins the match and advances.  If the Oneiros lives, Insurance Fraud wins the match and advances.

The screen-shot above was the result: when the match ran out with zero seconds remaining the Oneiros was still alive with a tiny sliver of structure hit-points.  It quite literally died a half second later.  Here's the logs from Local during the fight...

Matches last ten minutes exactly.  The Oneiros died in the final tick of the match.  CCP Fozzie had to quite literally check the server logs to determine on what side of the clock running out the Oneiros had died on.  Turned out it was the wrong side for The Reputation Cartel.  As I said, it's likely to go down as the closest finish in EVE tournament play ever.

And that wasn't the only close fight.  The day -- mostly made up of these loser's bracket matches -- was awash in close fights, close tactical fights, and great tactical maneuvering.  When the final match came, it was about an hour late due to a couple of issues (more on them presently) and only 500 people were there to see it.  But the final match where Warlords of the Deep put away the Exodunks team in two straight slaughters, was anti-climactic to say the least.  So, a hearty congratulations to the Warlords team and the Exodunks runner-up!  But that's not what's fun to write about.  ;-)

Instead, I want to focus in on two other matches that I was very impressed by.  Once Insurance Fraud put away The Reputation Cartel, they then had to fight Exodunks.  Very ironically, their deciding match was very similar comps: Exodunks with a Minmatar speed comp (with a Cyclone this time) against the same Insurance Fraud Proteus comp.  By the end of the match, IF was down to three Proteus cruisers versus an Exodunks Scimitar, Harpy, and two Merlins.  It was very easy to dismiss the Exodunks team, but the Exo frigs didn't konw that: they finished off one of the Proteuses!  Suddenly, it was again a very exciting match with the three Caldari ships (under masterful reps, of course) trying to wreck a second Proteus.  Only smart flying saved that one for Insurance Fraud: they separated their two remaining cruisers to counter the transversal of and kill the frigs.  Close, great fight!

In another case... not so impressive.  ;-)  But it really showed off the importance of managing the bans that are part of the modern tournament format.  In the fight in which Warlords pushed Exodunks into the loser's bracket, Exodunks brought a triple Ferox, triple Moa team.  This is a tough close-range blaster setup with a lot of DPS.  So you think that you would use your bans to ban long-range comps, right?  Not so much.  Exodunks banned Sleipnirs and Vindicators.  Granted, Warlords are good with those comps, but those aren't the comps that a Ferox/Moa comp should be afraid of.  Warlords brought Tengus and absolutely wrecked the Caldari blaster gang.  It really highlighted the importance of really thinking through your bans.

Unfortunately, the way the SCL was set up, there wasn't a lot of time to talk about the bans, and that's a shame.  That's an area they can definitely improve next month.  It will also be good if the SCL organizers put "announcement music" of some kind to announce the fact that a match is about to start.  This is a smart thing that CCP does, and allows tournament watchers to know even from across the room when a match is getting ready to begin.

Two other annoyances: first, the loser's bracket matches should have been done before the first Warlords match today.  I mentioned that yesterday, mentioned it to the tournament organizers.  Didn't happen.  They now agree that things will be shuffled for next time.  The second problem was the schedule itself: most late day matches were an hour late.  This happened because of two things.  First, in the first match between Reputation Cartel and Insurance Fraud, Reputation Cartel seemed to win.  But then someone pointed out the RC team was three points over what was allowed.  The judges had to void the match and the fight was replayed.  Then, the decision above about the Oneiros took some time, which delayed things further. 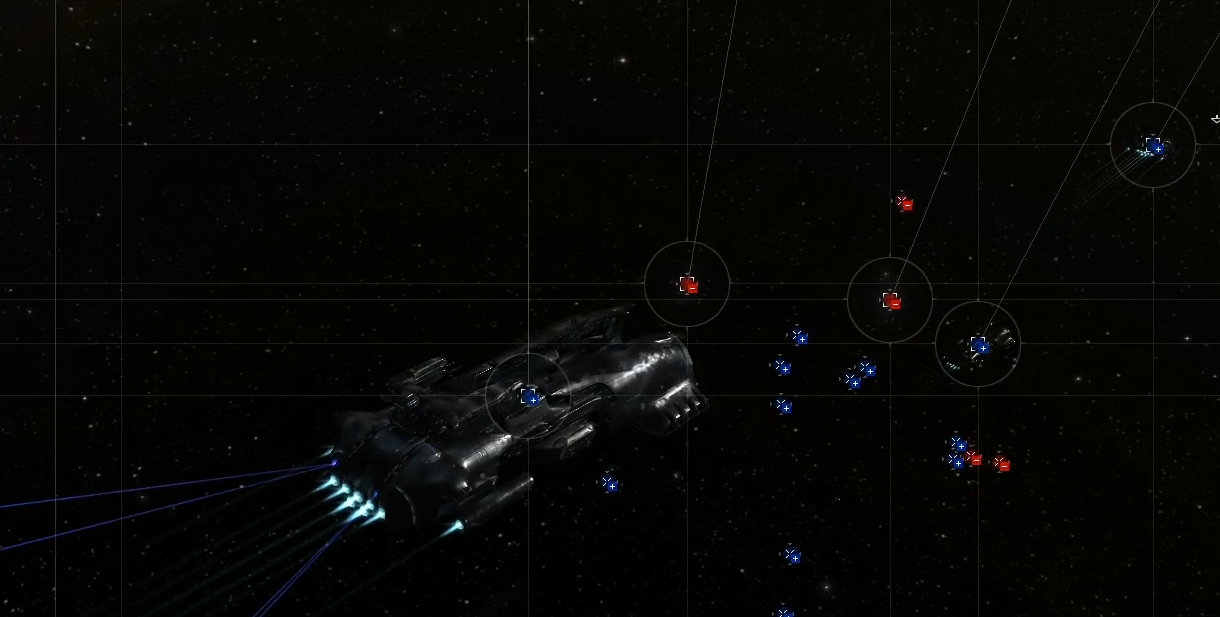 But again, these are relatively minor quibbles.  I believe the event was a fantastic success overall!  Big congratulations not only to the two winning teams, but to Dradius Calvantia, Bacchanalian, Seldarine, Apathetic Brent, GunniiH, Ituralde, CCP Fozzie, and all the other organizers of the first Syndicate Competitive League tournament!
Posted by Jester at 9:40 PM