Week in the Life: PLEX

Well, more like three months in the life.  Check out the price of PLEXes over the last 90 days: 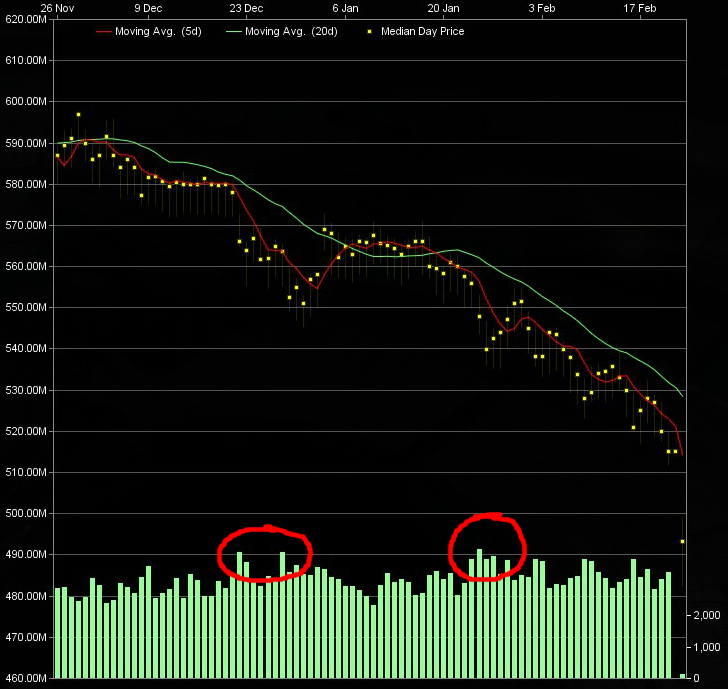 That's right, boys and girls: PLEXes are almost back down to the price they were a year ago.  What's going on?  Well, we can only speculate.(1)

We know from past behavior that PLEX volume after popular patches tends to spike at one-month intervals after a large number of resubs.  I've circled two places where we can see that happening in the volume data.  This represents people who joined or rejoined to play Retribution, which was released on December 4.  These players put down PLEXes a few days before the release, then buy them as their subscriptions run out 30 days after that and 60 days after that.  The late December PLEX buy was interrupted by a major holiday around that time, but the January PLEX buy shows a nice bell curve centered on January 23-24.  After that, you can usually see "mini-spikes" on seven day intervals centered on Saturday and Sunday when server load is the highest.

Volumes are still safely up after the increase in volume following the late autumn price spike, so we can rule out lack of demand as a reason for the falling prices.  Retribution remains popular among these fair-weather EVE players.  I'll have more to say about that in my next Snapcount post, either this weekend or early next week.

We do know that DrEyjoG has said that he would manipulate PLEX prices "if needed".  As reported on page 102 of the CSM December Summit Minutes, this has happened once:


Dr.EyjoG also provided CSM with a report on PLEX intervention(s) made by the EVE Central Bank since the last CSM Summit. The major intervention was related to a PLEX price spike triggered by a large FW payout, and PLEX prices have remained stable since that time. The CSM was satisfied that the ECB had acted appropriately and in line with the procedures previously described. Dr.EyjoG noted that he hopes to have a devblog out in January that discusses this topic in more detail.

January has come and gone.  If there was a dev-blog on this topic, I missed it.  Remember that this discussion took place on December 14, so when DrEyjoG says prices were "stable", he means "high."  The price of a PLEX on December 14 was 580 million ISK.  So we can safely assume that CCP didn't intervene in PLEX prices since that time, either.

One of the clever means CCP has of tweaking PLEX prices without direct manipulation is through sales on PLEXes.  And sales on PLEXes have been more or less continuous since late December right up to today, starting with the holiday season sale before the end of the year and currently with the "dueling sale" that was probably advertised when you logged into EVE today.

I've covered before why high PLEX prices are bad for CCP and they're motivated to keep them relatively low, and I'm pretty sure this is what we're seeing: CCP manipulating once after the FW button-orbiting debacle, and now using PLEX sales to increase supply and gently tug prices down that way.  It's only a guess, but it's probably a pretty good guess.  Check out the price of PLExes bottoming out briefly during the late December spike as all those holiday PLEXes got sold...

The only question is how far down is this going to go?  One thing's for sure, though.  That number won't be 380 million.  Those days are likely gone for good.  The other thing CCP is motivated to do is to keep PLEX prices inflating with the overall rate of inflation within the game's economy.  I think we'll know CCP is comfortable with the price when the PLEX sales stop.  At that point, I think it'll be time for you investors to stop selling PLEXes and start buying them again.