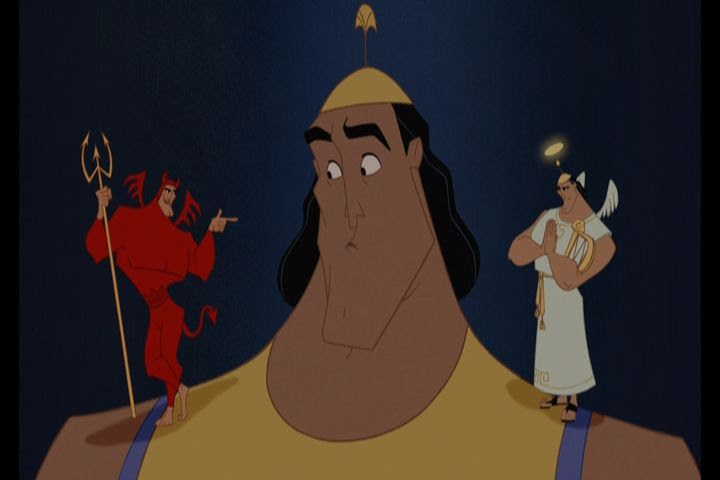 Two years ago, in the midst of another CSM run, I wrote a pair of posts on this blog.  The subject was the future of EVE Online.  At the time, I referred to them as my "devil" and "angel" posts, respectively.  In the "devil post", called "The die is cast", I looked at the future of EVE solely from the perspective of CCP and more specifically from their pure business side keeping in mind that CCP was a business and a business first and foremost has to protect its investment, cash flow, and personnel.  In the "angel post", called "Learn how to fly", I looked at EVE solely from the perspective of theoretical future CCP customers.

Now the posts aren't all that relevant any more -- the topic under discussion was Incarna for the most part -- but it's interesting that in the midst of this CSM run, I'm again being asked to examine an issue about the future of EVE Online from the greater and baser parts of my nature.  You see, on my EVE Online CSM candidate thread, someone threw down an interesting challenge.  Before I reveal the challenge, I should explain a little bit of background.

The issue at hand is the future of high-sec in EVE.  There are lots of candidates running for CSM this year, but far and away the most polarizing candidate is named James 315.  If you haven't heard of him, you will.  Last August, James started a new blog called minerbumping.com with the simple premise of declaring himself the "Supreme Protector" of a cluster of ice-mining systems around high-sec generally centered on the Halaima system in The Citadel.  He declared that any ice miner in the area he's protecting that didn't pay him a 10 million ISK protection fee would be bumped or ganked and generally subject to low-level harassment.  He has a particular rage about AFK ice mining, the practice of setting up a Retriever or Mackinaw with its high cargo capacity next to an ice boulder, setting the ice miners to work, and then minimizing the screen to go do other things.

And since last August, James has been gathering followers.  Some of them are in a corp called New Order Logistics.  Their ticker is CODE.  The "code" is detailed on the blog but basically involves extorting ice miners, bumping or ganking those that don't pay extortion (and for all I know, those who do), and demanding that miners thank followers of the code for the privilege of being ganked.  Gankers that enforce the code are called Knights of the New Order and are rewarded with ship reimbursements for Catalyst destroyers that they use to gank ice miners.  Where the money for this comes from is anyone's guess, but I do note with interest that


The New Order of Highsec continues to recognize The Mittani as the legitimate Chairman of the CSM. This determination remains the rule in all New Order territories.

Dear Heaven, do I love this game.

Anyway, James 315 is running for CSM8 under the banner of Protector of High Sec.  He hasn't declared himself openly on the Jita Park section of the EVE-O forums yet, but he's conducted a number of interviews so it's fair to say he's going to be a candidate.  And because of some of the posts on this blog that they object to that they believe indicate that I want to nerf their play style, I am enemy number two of the New Order.(1)  Enough background.  Let's get to the challenge.

Marc Callan -- who as far as I can tell isn't even associated with the Order -- posed this challenge:


I'd be interested in hearing Ripard's opinion on the merits of the New Order's proposals for adjusting the risk-to-reward balance in high-security space.

I'd also really like to hear Garth's opinion on the merits of the New Order's proposals for adjusting the risk-to-reward balance in high-security space.

And this was such a charming mental exercise that I find that I cannot resist it.  ;-)  Once again, in the midst of a CSM battle, I'm writing about the future of EVE Online.

The first tricky part: what, exactly, are the New Order's proposals for adjusting the risk-to-reward balance in high-security space?  After asking, I was pointed to what appears to be James's CSM platform.  After reading it, I'm going to be looking at the section titled "NERF HIGHSEC PVE INTO OBLIVION".  The other sections are more focused on low-sec and null-sec and the challenge directly relates to risk versus reward in high-sec.  Specifically, this part of the platform is seven items long, but I'm also going to include one small addition from the low-sec section as well since it seems relevant.

So, this week I'm going to write a series of three posts.  In the first post, I'll tell you what I think of these seven-and-a-half proposals.  The second post will involve letting Garth out of his cage to give you his opinion.  That one actually makes me nervous.  I've joked before about Garth "clubbing me in the back of the head" when he wants to write something but honestly, it isn't much of a joke.  I am not schizophrenic in the slightest but when Garth wants to say something, his posts almost literally spring forth fully formed and flow straight from the keyboard to the blog.  I've never tried to deliberately invoke Garth before, so that will be an interesting mental exercise.  And in the third post, I'll wrap up with some of my thoughts on the current safety of high-sec since this is likely to be an issue for all the candidates this year.  I've also offered to speak to a representative of New Order Logistics and write about their perspective, so there might end up being a fourth post in this series at some point.

Hang on, folks.  This ride might be a little bumpy.