Know what my #1 and #2 favorite ships to fly right now are?  First place, Talos.  I love its mix of DPS, speed, agility, and tracking.  Second place, Ashimmu.  It's not a well-known ship, but I have a solidly-tanked one I love flying in armor HAC small gangs.  The new Armor Honeycombing skill and its associated agility buff makes it a joy to fly and to apply its double webs and neuts.  The thing that the two ships have in common are precision.  Both are precision tools that require careful, thoughtful flying and in the case of the Ashimmu, a lot of cooperation from its gang.

This is why I'm rather amused that CCP is trying to turn these flying scalpels into clubs.

First up is this post by new ship balancer Kil2... aka CCP Rise.  It was very predictable that the attack BCs would be getting nerfed after what happened to the combat BCs.  What wasn't predictable was how they would get nerfed.  Remember, in their original iteration, the attack BCs were intended to be smaller, thin-tanked ships that could successfully take on bigger targets thanks to the agility to avoid their fire.  Their primary defense was their ability to mitigate damage by dodging fire.  They were intended to be extremely vulnerable to frigates and other light ships while applying strong DPS to larger targets like battleships, capital ships, and super-capitals.

In their new iteration, attack BCs have been judged too agile, too fast, and possessing a too-small signature radius.  ...WTF?

I absolutely agree that a nerf was incoming and that a nerf was even needed, but the area where attack BCs have been too strong has been in their ability to attack smaller targets.  The nerf I was expecting was to reduce the effectiveness of their guns when attacking frigates and destroyers.  Already quite thin-skinned, their only defense has been to be where incoming fire wasn't.  Only now large chunks of this defense are being stripped away, particularly with sig radius increases of between 10 and 15%.  Given that virtually all of the attack BC fits out there are shield tankers (which will multiply the effect of these larger sigs), this increase is going to be very significant.  It will be interesting to see how effective battleship guns in particular are at sweeping attack BCs off the field.

The other advantage attack BCs have had is their ability to GTFO under duress.  But this is also being reduced, particularly against the Naga.  Those who fly this boat already know the Naga was none too agile to begin with.

So... yeah.  To quote Sirius Black, the ship balancing team has "applied their keen and penetrating intellect to reach the wrong conclusion" about what was needed with these ships.  I'm not a fan of these changes.

Let's get to the changes to Tracking Enhancers and Remote Sensor Boosters, starting with the TEs.

Make no mistake: the TE nerf is aimed squarely at shield-tankers that rely on TEs for damage, not range.  So those of you out there in sniper Nagas, Oracles, Rokhs, Tornados, and like ships are not going to be affected or are not going to be affected all that much.  Most of these ships rely on low-slot damage enhancement and Tracking Computers for their effectiveness, not TEs.  And I note with quite a lot of interest that TCs aren't being touched this go-round.  We'll get to that.

Sure, these ships might sacrifice a little bit of range if they use a TE in a low due to CPU constraints -- I'm looking at you, arty Tornado -- but it's not going to be a serious consideration.

No, this nerf is aimed at shield Taloses, Oracles, and 800 Nadoes, with Tempests and Cynabals also badly nerfed but likely considered acceptable collateral damage.  It's also going to badly hurt my beloved Vagabond but that doesn't matter because hardly anyone flies them any more.  These are ships that, by and large, fight within fall-off range instead of optimal range.  All gun ships in EVE do 100% DPS to targets that they hit out to optimal range.  Then, as you fight further and further into fall-off, your DPS drops dramatically.  Here's the current DPS curve for a dual-TE Talos firing Null ammo: 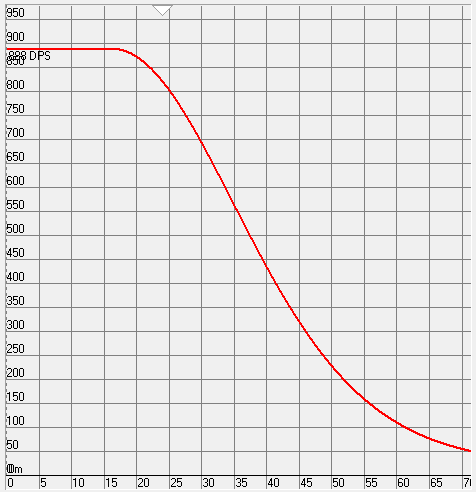 Fit this way, this boat has a 16km optimal and a 28km fall-off, but Taloses nearly always fight in fall-off.  Thanks to its thin tank, a Talos that gets in close is a dead Talos.  As you can see, DPS is maximized at the edge of optimal (about 875) but is cut by almost two-thirds at the edge of fall-off (340 DPS at 44km).  At point range, DPS is about 800.  With two of the new TEs, range is nerfed to 15+24.  This cuts DPS at point range by about 70-80 DPS.  "This change will be somewhat painful for many ships that rely on TEs for range," CCP Fozzie says with his characteristic understatement.  ;-)  Yeah thanks, Fozzie, got that.

But in the very height of irony, know what statistic of the Tracking Enhancer isn't getting nerfed?  Yep, you got it: tracking!  Other than the range nerf, the ability of shield-tanking attack battle cruisers to attack frigates and destroyers is completely unchanged.  I repeat: WTF.

Armor Oracles, which typically don't fight in fall-off, aren't being nerfed.  But in addition to the Talos, you guys that like flying red ships are pretty badly boned here.  Tornados and Tempests each lose 60-70 DPS at their combat ranges, and Ruptures, Cynabals and Vagabonds lose about 30.  Armor tanking, which recently got a very nice buff due to Armor Honeycombing skill, just got a second very nice buff with this change.  From other comments in Fozzie's post, we can infer that both of these changes were the intent.  Minmatar is out as FOTM for a while, and all you armor ships using TCs to do this same sort of thing are safe from these changes.  Amarr victor.

That brings me back to my Ashimmu.  One of the reasons I like them in small-gang armor fleets is that a Remote Sensor Boosted Ashimmu is nearly inescapable on gate.  It's long been known that the Linked Sensor Network meta2 RSB has been the best choice for this sort of use.  Ridiculously cheap and common, the meta2 RSB gives the same bonus to scan res boosting as the much higher CPU-needy tech2 version.  A few of these fitted to one of your command ships is good for a 2000+ scan resolution on an Ash.  That's sufficient to nab most frigs and all destroyers, where the Ashimmu's 90% webs and close-range neuts makes them easy prey.

About this, Fozzie has to say "This has contributed to the growth of insta-lock camps that are in our opinion are a bit too easy nowadays."  OK, fair enough.  So we're going to see two changes here.  The maximum scan res bonus is being reduced by almost 20%, and the meta2 RSB is now going to be just as bad as every other meta2 item, pushing people toward much harder-to-fit T2 RSBs.  In my opinion, both of these are reasonable changes for low- and null-sec gate camps.  But it also nerfs suicide ganking in high-sec, where insta-locking frigates and shuttles carrying small valuable cargoes has been a lucrative profession of those in the know.  Expect to see fewer many kill-mails for shuttles carrying dozens of PLEXes and the like.

Don't kid yourself thinking that this was collateral damage to the change.

As for my Ashimmu, I have resigned myself to many fewer calls of "point, double web" against small, fast-moving targets when our roaming gang stops for a few minutes on a gate.  Low-sec in particular just got a little bit safer, and some of the tools in the small-gang PvP tool box just got a little less precise.
Posted by Jester at 10:27 AM