Welcome to the junk drawer, part of a series of monthly posts in which I dump all the stuff that I couldn't develop into full blog posts this past month.  It's a goofy, eclectic sort of junk drawer this month, I'm sure you'll agree...

Let's start with two more minor "little things" sort of suggestions for the game.  First, an easy one: with all of the drone buffs over the last several months, drone damage is finally coming into its own as a viable fourth option for EVE Online damage.  But one piece is missing: a key-bind for the "launch drones" command.  Every other weapon type can start applying damage with a single key stroke.  As it is, drones need a right click, a left click, then a key stroke.  A key-bind would reduce this to two key strokes.

The second one is a bit more goofy, but sure would be handy.  Real life AEGIS missile destroyers and cruisers, when operating as a group, can throw all of their available missiles into a single "basket" which is then managed by a central fire control authority.  In much the same way, it would be handy if corp members that stay docked fairly close to home could throw manufacturing, science, and other industry slots into a single basket to be managed by a corp "industry officer" or the like.  That would be a nice buff to industry corps of all kinds, particularly those in null-sec.

Two James 315 notes.  First was this, courtesy of the Declaration of War pod-cast, which just made me laugh. 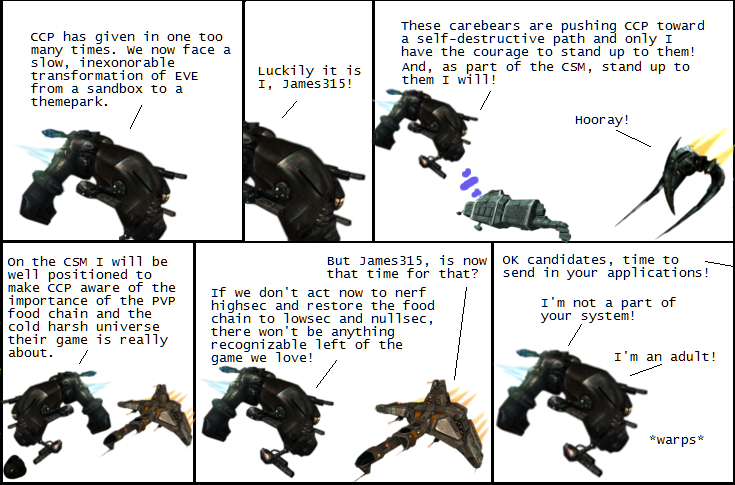 The interesting thing about James 315 as a CSM candidate is that he totally bought into both the "you can't vote against me" and "all publicity is good publicity" mechanics.  Given that, it would have been quite interesting to see how he had done in the actual election.  I'm sorry that he's not running.

This month, I wrote a post that in part examined the Pandemic Legion "financial audit" for 2012.  In particular, I thought it was kind of interesting that a lot of the expenditures were put into individual PL corps and was curious where that ISK was going.  And I was also interested by the fact that the "audit" only looked at expenditures.  Revenue was not included in the audit, nor was it examined where the revenue was coming from.

Well, there was a follow-up piece on themittani.com this month confirming that this audit was the real deal.  It also explained what the individual corp expenditures were about: ammunition, jump fuel, and like expenses.  That makes total sense.  Guess what was missing from the follow up piece, though?  Yep, you got it: any explanation of where the revenue comes from.  Not really surprising, I guess, but if there was an opportunity to answer the biggest question about this audit, that was it.

Thanks to both of you.

And I end with a particularly strange one.  Dernarius Starariur likes to share his theories of the workings of New Eden with me from time to time, and this month he came up with a particularly amusing one.  In the in-game lore, PLEXes are "pilot license extensions" that are produced by CONCORD that are consumed by capsuleers when they are used.  Therefore, are they like drugs?  Does CONCORD put an addictive chemical into PLEXes that makes capsuleers crave them every month?

And that's all for the junk drawer this month.
Posted by Jester at 11:12 PM