So, sirunidan was on-the-ball enough to take pictures of the display screen at PAX East during CCP Unifex's presentation on what we can expect from Odyssey.  Here's the first six pages.  Here's the second six.

The meat starts on slide five where we're told that the mechanics and the UI of "discoverable sites" will be changing, as will "rewards".  What kind of rewards?  We don't know, but there's some hints.  On page eight, we see pirate tags, the in-game symbols for a number of moon-goos.  The first almost certainly refers to the "Tags-4-Sec" already revealed in the December CSM Summit Minutes.  The latter has some interesting implications, I'm sure you'll agree, particularly in light of the fact that page seven refers to "relocating resources"...

Let's hope the resources being relocated are moon-goo-shaped ones. 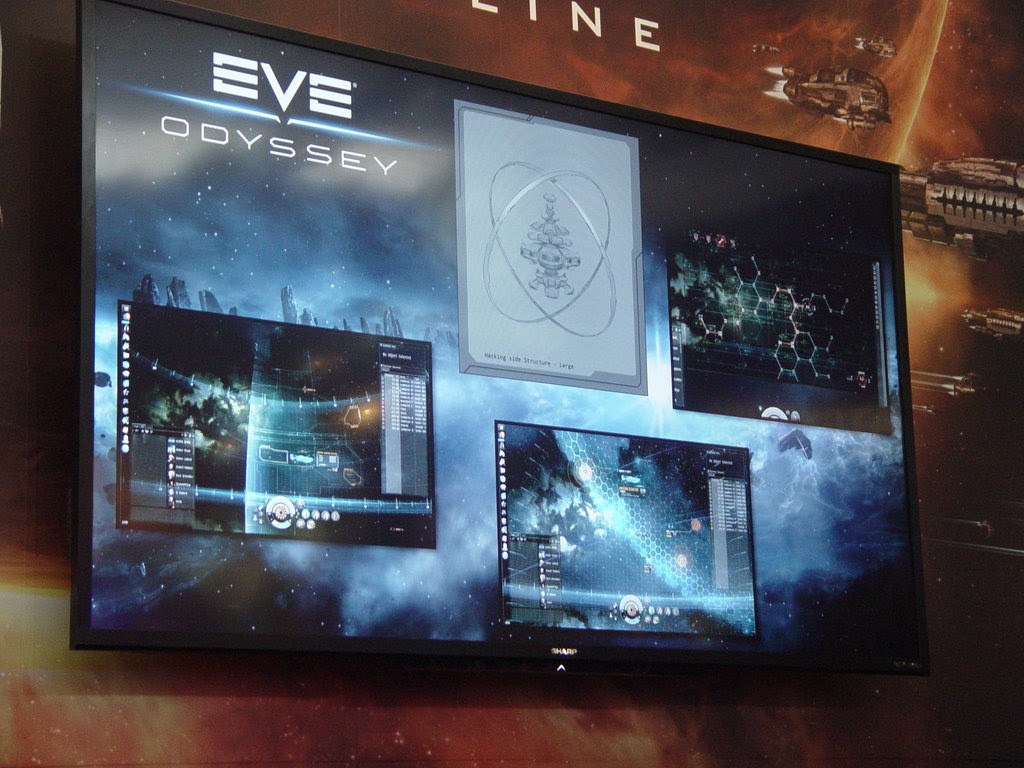 Page six (reproduced above) has a few teaser graphics of what the new exploration UIs might look like.  There's an intriguing rumor/speculation going around that the bit on the far right refers to a hacking mini-game of some sort.  Page nine references "new ships" and we have confirmation from EVE News 24's source that this -- at a minimum -- refers to a new set of Empire faction combat battle cruisers: Navy Drakes, Harbingers, Brutixes, and Hurricanes.  Here's some pictures.  My favorite ship class is getting one hell of a buff!  Can't wait!

Does this mean that CCP Fozzie will be putting off battleship re-balancing for a bit in favor of re-balancing faction frigates and cruisers first instead?  If he's looking for opinions, I'd be in favor of that...

Whether the Gnosis Jove/SCT battle cruiser is also included in this isn't mentioned, but I'm sticking to my prediction that the Gnosis is going to be the official EVE 10th Anniversary present to all capsuleers.  We are promised a special give-away for that date, which happens on 6 May 2013.  CCP Unifex: "You want to have an account subscribed on that date."

It also looks very likely that there are going to be a number of big advances on the POS front, including -- potentially -- personal hangars for individual corp members.  That alone should go a long way toward quieting down the angry wormhole contingent, though it's just a first step rather than a solution.  The EN24 article has a really funny quote/story from CCP Dolan on this issue...


CCP Dolan told us how the POS code was constructed, in very loose terms. CCP is somewhat forgiven for their lack of progress on it, it sounds like staring into the unblinking eye of an Elder God, fueled by drunken Icelandic programmers. He discussed it as an inverted pyramid and the top of it was rat AI, better known to us as Skynet. Yes, the POS runs on the same NPC AI as pirates and faction police. I shit you fucking not.

Since POSes have to independently shoot at people from time to time, I guess this makes some kind of sense... oh wait, no it doesn't.  Yikes.

CCP Unifex also had an interesting message: "If you've been in a big really well-established alliances... watch out."

More minor stuff: upgraded graphics for stations, supers, and other in-game assets including what most of us see when we're docked.  There's 1400 people coming to Fanfest, and there will be an HD stream for everyone who couldn't make it (twitch.tv will be handling that).  DUST 514 seems to be ready to come to null-sec.  And there's a hint that there might be "new space" or perhaps even some new systems introduced to New Eden.  That one seems a bit more speculative.