The Battle of Caldari Prime

So, that was interesting.

I want to start with the time zone issue.  All things considered, it was probably the least important part of this live event so I want to get it out of the way first.  The event started around 1645 EVE time, and from what I can tell was over by around 1930.  That means that if you're USTZ, unless you took the day off work or school you missed all the fun.  I'm told by sources that I trust that CCP will eventually have something to say in public about this.  I know that the people that ran the event for CCP feel terrible and they feel unfairly criticized over this.  Fair enough.  But it is an issue.  When the event started, I was watching #tweetfleet on Twitter.  David Reid, CCP's Chief of Marketing, had this to say:

That's my issue here.  From live events to dev fleets to mass tests, virtually every interaction CCP has with their customer base happens at 1700 EVE time.  That effectively disenfranchises a solid percentage of their customer base.  If your customer base feels disenfranchised, they can't build up enthusiasm for your events or your product.  They can't tell their friends who are on the fence about EVE, "Hey, go watch this it's pretty cool!"  As a Marketing effort, the budget for this event should have come out of the Marketing department.  If that means overtime so the event can happen on a Sunday and awards and recognition for the CCP employees that sacrifice time with their families for it, then that's what should have been done.  End of rant.

Let's get to the event itself. 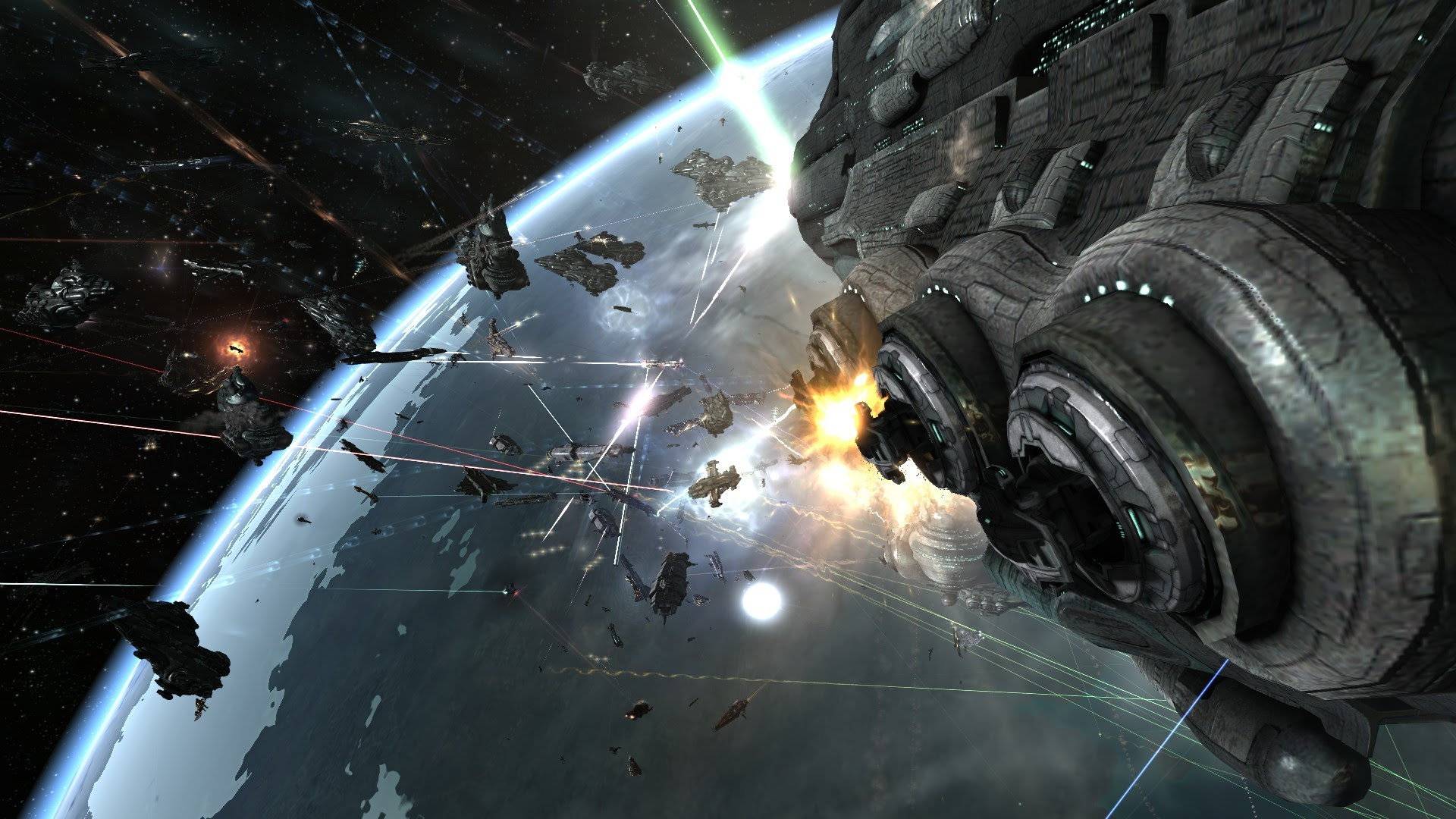 First, I'd like to lay down the storyline and lore behind the event for those not familiar with it.  The Caldari Navy titan Shiigeru has been in orbit of Caldari Prime for about five years.  Caldari Prime, the former home world of the Caldari people, was invaded just before that time and conquered despite it being well within Gallente space.  Shiigeru itself was left in orbit as a sort of "insurance policy".  When the planet was conquered, there were still tens of millions of Gallente citizens living there.  These were forced into "containment districts" with Shiigeru orbiting overhead.  The threat was that should the Gallente attempt to retake the planet, Shiigeru would bombard the planet killing tens of millions of Gallente.  The Battle of Caldari Prime was -- in essence -- a surprise attack on Shiigeru by the Gallnte to remove this threat to their people.

As a marketing and storyline event, I'd classify the Battle of Caldari Prime as a success.  The twitch.tv stream peaked at a little under 9000 viewers.  Given that the New Eden Open peaked at about half that, that means this was an unqualified win.  Did the people watching the stream get a good show?  That, I am not qualified to say.  TiDi in the system stayed pretty steady at 11-18% for most of the event, so time was running much slower than normal.  This has the effect of making the game appear less dynamic than it would for the typical EVE player.  But, since the fight shown on twitch.tv was more in line of a Star Trek sort of fight: lots of enormous capitals and super-capitals on field attacking each other viewed at range with little dynamic motion or need for such dynamic motion.  So, to someone unfamiliar with EVE, the event might very well have appeared majestic and epic.  I've been playing EVE myself too long to judge.  ;-)

The only downside to the "epic battle" theory was when Shiigeru was finally killed, it simply vanished off the field without exploding.(1)  Then about 15 seconds later (TiDi, remember), the wreck appeared.  Whoops.

During most of the event itself, the population in system was limited to about 1500 (it started at 1000, was raised to 1500, and eventually raised to 2000).  On the ground, there were about 1700 DUST 514 players involved.  All in all, that's a good number of players.  A lot of players sat on gates trying to get in, but a lot of players were able to participate.

One of the biggest points of contention of the battle: was the outcome of the fight decided in advance?  And therefore, did player actions have any effect at all?  This is a tougher issue.  The answer to the first question is clearly yes, the outcome of this fight was decided in advance.  Shiigeru was doomed before the day began.  Here's the DUST map showing the wreckage: I assure you that CCP wouldn't create that without intending to use it.  I also assure you there was not a version showing wreckage of Nyxes or the like to be used if the Caldari had won.

It's been made clear to me from a number of sources that could participate (and it's shown on the video above) that the players involved were saving the titan.  Its shields stabilized at around 40% and were holding for quite a while.  At that point, additional Gallente Moroses were brought in by CCP to tip the balance.  Those Moroses began sweeping throug Caldari Chimeras and Wyverns destroying one every few minutes before turning on the titan itself.  With the rep ships out of the way and a lot of players involved wanting to get on "a titan kill-mail", Shiigeru became easy meat.

EDIT (24/Mar/2013): CCP Fozzie assures me on Twitter that more Moroses were not brought in but instead they simply switched targets to Chimeras to break the reps.  Thanks, Fozzie!

So, the outcome was preordained.  But in terms of the story-line of the game, is that such a bad thing?  I realize some Caldari faction players are upset about this but realistically, the Caldari Militia kind of got its ass handed to it over the course of a year or more of faction warfare.  That happened because of real player actions.  It can therefore be argued that the death of Shiigeru was mandated by the actions of players themselves!  But yeah, I understand that may be hard to hear.

From my perspective, the most interesting part of this aspect of the battle, the Gallente were clearly victorious in space.  But I'm told the Caldari were victorious on the ground.  But this game has consequences and CCP's long-term goal here is that events in one will affect what's happening in the other.  It would have therefore been very interesting to me had the Gallente Navy immediately turned on the fight on the planet below and began cratering Caldari DUST 514 loyalists with orbital bombardment.

Maybe CCP and DUST isn't quite ready for that yet.  ;-)

Finally, the event was not without its bugs and quirks.  We're apparently not going to see the kill-mails on eve-kill for any of the supers destroyed, particularly the titan.  Since the final blows on these supers were inflicted by CCP devs and since those devs won't provide the API verification of those kills, it's likely they'll never see the light of day on eve-kill.  Perhaps they will appear on battleclinic at some point; perhaps they already have (say so in the comments if so!).

In addition, the mechanic for making the system a free-for-all was not without its quirks.  During the fighting, every player in system was suspect-flagged, meaning that every player could shoot at every other player.  From a story-line perspective, this happened because CONCORD attempted to intervene in the early fight between the Caldari and Gallente navies before the lead CONCORD ship was destroyed by the Caldari Navy.  This caused CONCORD to "throw up its hands" and declare everyone in the system suspect.  However, as CCP became mroe confident in how TiDi was holding, they allowed additional people to enter the system.  When Shiigeru came under attack, the limit was increased from 1000 to 1500.  When Shiigeru fell, the limit was increased again from 1500 to 2000.

But not all of these new arrivals were declared suspect.  This meant that a number of players managed to CONCORD themselves.  Later on in the video, CONCORD ships can be seen on the stream implying that not everyone that died in system died to other players.  ;-)  In addition, anyone hoping to jump capitals into the system or light cynos or covert cynos were out of luck.  You had to get into system in a subcap, and you had to get in the old-fashioned way.

But like the time zone issue, these were relatively minor quirks on what in my view was ultimately a successful event.  All in all, I believe The Battle of Caldari Prime was a success.  First, hopefully we'll see some kind of kick-ass trailer around this... perhaps even something used as a commercial for the game?  And CCP will hopefully learn from the event and we'll see more events like this in the future... hopefully spread across various time zones...  ;-)

EDIT (24/Mar/2013): Footnote: someone got the Shiigeru loot and has the video to prove it.