This fine ship, this fine crew

Every once in a while, you get a suggestion that EVE ships should have crews and that the actions you take in game should improve the abilities of the crew and from there, improve the abilities of your ship.  Just to get it on the record, I thought I'd mention a few reasons why this idea -- while indisputably awesome -- would be a bad idea for EVE.

First, let's get past the notion that some people have that EVE ships don't have crews.  They do.  It's not something that comes up in the lore very often, but it does appear part of the earliest lore of the game.  What the capsuleer aboard a ship does is reduce the crew needs of a ship, not eliminate them.  Dig enough and you'll eventually come upon this chart that gets bandied about: 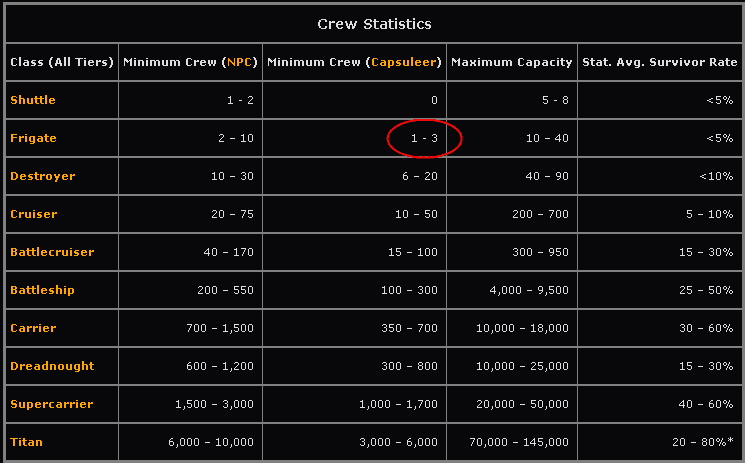 The chart even goes to a bit of trouble to give you the survival chances of this unseen crew.  You may cue the appropriate scene from Starship Troopers in your head... now.  So capsuleer ships have crews.  Should the abilities of these crews improve?  I don't think they should, and it's for four reasons.

First, the crew system -- whatever it was -- would be gamed to hell and back.  This is something that EVE players excel at.  Even if you only improved crew stats for PvP, and even if it only improved by miniscule percentages per fight, you'd have super-carrier pilots out there giving their alt 100 T1 cruisers and blapping them slowly with fighters one by one by one for hours on end.  Whatever rules that CCP tried to put in place to minimize this sort of thing, players would find ways to avoid and sidestep them.  That's what EVE players do, after all.

That brings me to the second problem with this idea: it would further widen the gap between veteran players and novice players.  It'd be the vets out there with a few more percentage points of speed, damage, and tank, whereas the newer players would have none of it.  The vets already have huge advantages in these areas; why make those advantages even bigger?

CCP would have to decide if ships retained their crew statistics when traded or contracted and would almost certainly come to the conclusion that they would have to.  Otherwise, what happens to your crew when the ship gets tossed into a carrier or the like?  Since the crew stats would remain, they'd have to remain for contract or sale to other players as well.  While this would create an interesting new profession, it would open a Pandora's Box in another way.  What would most likely happen to most of these high-bonus crews is that they'd soon find themselves in high-sec, being used to increase the efficiency of missioning and incursioning.  Those would be the players most likely to have the ISK to spend on high-efficiency crews.  Why risk a valuable asset in PvP when it can contribute to your money-making activities?

Finally, on those occasions when they were used in PvP, ships with high-efficiency crews would tend to push the pilots to be even more risk averse.  If you have a valuable high-efficiency crew, you're not going to want to risk it on a questionable fight.  Better to save a difficult-to-replace resource only for fights you're sure you're going to win.

Anyway, the idea of EVE ships with crews is extremely fun to think about.  But in my view, it would create more negative consequences than positive ones.  And all of this assumes that CCP could balance the crew system in the first place.  With ship balancing still going on and likely to continue for the next couple of years at least, I'd say there are enough game balance questions -- and enough game balance work! -- for the foreseeable future.
Posted by Jester at 11:53 PM