So here's one of those geek philosophy posts that I write sometimes that will give you some insight into how my brain works.  Don't say you weren't warned.

Last year, when I wasn't running for CSM, talking about the CSM candidates was pretty easy.  It was doubly easy because among the "serious" candidates that I felt had a shot, about half of them were CSM6 members running for reelection and the other half were new voices that I thought stood a good chance.  So last year, I wrote three posts on the matter:
And that system worked just fine and didn't produce any conflict.

This year, things are quite different.  Only two CSM7 members are running for reelection -- Trebor Daehdoow and Greene Lee -- and talking about them will be very easy.  I don't think Greene Lee should be reelected based on his CSM7 performance, he's unlikely to be reelected because his power base is gone, and he didn't do enough outreach with the players during the year he had to give himself much of a shot.  Trebor's the exact opposite, as I've already covered.

I still want to write a post about who I think will win, and I still want to endorse a slate of candidates.  But this year, there's a little logical split happening in my head.  After much agonizing, I've come to the conclusion that it's in both my best interests and the CSM's best interests if I endorse a full slate of 13 candidates, plus myself.  And that's what you'll be getting from me on Monday or so: a "voting guide" that includes the names of 14 CSM candidates that I hope you will vote for.  But, in between who I'm going to endorse and who I think is going to win is another group of 14 CSM candidates that I want to win and that I think deserve to be there.  Let's lay it out visually: 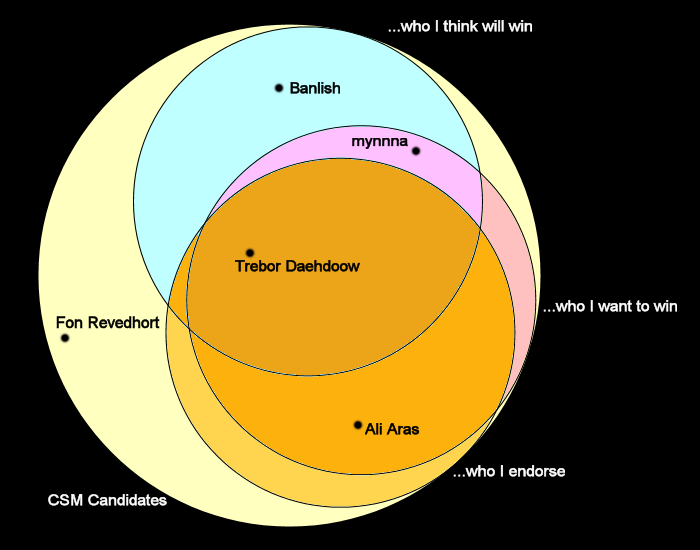 At the opposite end of the scale is someone like Banlish, TEST Alliance's candidate.  He's almost certain to win no matter what I say or think.  Sure, he's got great in-game experience and if we both win I look forward to working with him.  But he's not campaigning or doing player outreach; he's just coasting.  Fine, he has that right.  But it doesn't mean I have to endorse him.  ;-)  Other candidates are equally easy.  I'll endorse Trebor, I hope he wins, and I think he will.  Easy.  I don't think Fon Revenhort is going to win, I hope he doesn't, and there's no way in hell I'm endorsing him.  Also easy.

The complicated group is that little pink sliver in between.  mynnna is assured a CSM8 seat if anyone is, and despite some holes in his EVE knowledge, I hope he wins.  He'll bring a very valuable voice to the group, he's got some fantastic experience, and in a term that's likely to be dominated by economic concerns in New Eden, CSM8 will be lucky to have him.  But should I endorse him?  You have to be kidding.  He doesn't need my help.

Therefore, there are 14 candidates that I want to win.  There are 14 candidates that I intend to endorse.  But these two groups are not the same.  mynnna's presence in that little pink sliver logically means that there is at least one candidate that I'm going to endorse that I don't want to win.  This is called "politics", and it automatically gives anyone whose brain does not operate in channels this complicated permission to laugh at my discomfort.  ;-)

There are two solutions to the dilemma, but politically, both are poor choices:
So, I'm in quite a little dilemma here, but politics is politics and I'll deal with it.  And as I've implied, I'm not the only one in this position.  Mittens is too, and likely, so is riverini.

So expect three posts from me on this matter:
All three will appear over the next few days.  For those of you supporting my candidacy, thank you!  For those of you sick of politics, I'll be back to a more normal set of topics next week.
Posted by Jester at 11:55 AM