The only downside of being at Fanfest is that you sometimes miss some of what's at Fanfest.  As Trebor correctly pointed out to me yesterday, it's the sign of a good conference if you have trouble deciding which sessions you'd like to go to.

On Friday, it seems to have been universally agreed that the best session of the day was the Economy Roundtable, which I definitely would have attended except for the fact that it overlapped with the Alliance Panel which I definitely was NOT going to miss.  Oh well, that's what Youtube video replays are for.  One of the interesting statistics to come out of the Economy Roundtable: 50% of all EVE players "play solo", whatever that means.  I'll have to either watch the whole thing or corner DrEyjoG at some point to find out.  That said, the number does not surprise me in the slightest.

I also would have liked to have been in on Team Pony Express's Roundtable about the new player experience, but it was titled "The Un-Frankenstein Experiment" for some reason and by the time I figured out what the title was about, it was too late.  Whoops!  Another one I'll be watching on Youtube.

Nope, on Friday, I spent the entire day in the Singularity secondary hall until it was time for the EVE keynote.  My fixed position, particularly since I transmitted it on Twitter a couple of times, made it really easy for people to find me and lots of players swung by to say hello, which I really appreciated!  I guess I also appeared on the EVE TV stream at one point -- I think while I was watching the Art Panel? -- as part of an audience reaction shot.

I still haven't met Two step, Liang Nuren, and the King of Space, nor Elise Randolph, Shadoo, or Seismic Stan from Freebooted.  I hope to rectify this today.

Anyway, in the Singularity hall were... 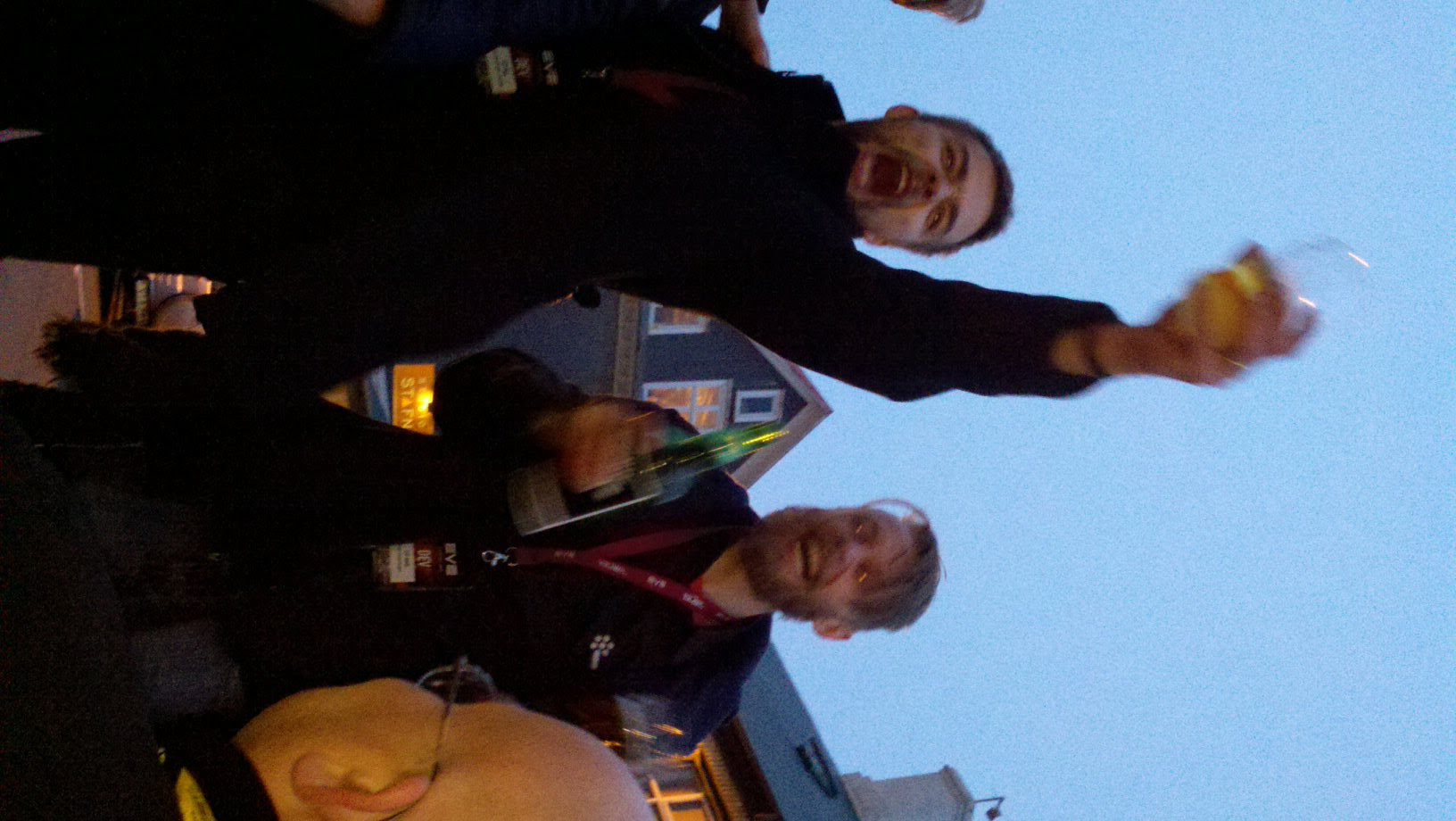 A quick dinner, and then it was time for Pubcrawl with the Devs.  How this one works is that you go back to the Harpa at 9pm and you congregate at the bottom of the stairs.  You've chosen the group of devs that you want to hang out with, and my group was led by CCP Beattik and was number 15.  In due course, two devs come down the stairs waving a "EVE Fanfest Pubcrawl" banner with two big #1s on it.  Then #2, #3, and so on.  Each group is taken outside Harpa and gathered where there are four or five cases of beer, two bottles of Brennivin, and a couple of boxes of shot glasses.  And as a result, there's some pre-pub crawl drinking that goes on.  ;-)

As the picture at left probably shows, CCP Beattik is both a genius and crazy, in the way those two qualities sometimes combine...  He's a fantastic guy and great fun to hang out with.

I'm not a big fan of beer, and the beer in question is Gull.  It's a lager and I guess it's pretty good as lagers go but again, I'm not a big fan of beer unless it's Guinness, so I passed on that.  I was very curious about Brennivin, though, so I accepted one of the first shots of that.  And it's excellent!  It's a schnapps flavored primarily with caraway.  It doesn't have an alcohol flavor at all and so you can probably render yourself inert pretty quickly on it if you're not careful.  I myself had five shots of it over the course of the night which tends to scorch the back of the throat a little bit.

Skááááááááál!
Posted by Jester at 4:11 AM