I can has Iceland!

My travel day is now complete and I'm sitting in my hotel room/apartment in Iceland.  U.S. politics means that a lot of flights are being delayed right now, and my flight from Phoenix to New York was no exception, delayed two hours due to "air traffic controller activity", a fancy way of saying that the FAA is furloughing air traffic controllers to save costs.  gg, U.S. government, gg.  That meant that my comfortable four hour layover in New York was suddenly a little less than two hours.

Still, I got very lucky in that regard: my incoming flight to JFK was on US Airways airline which lands in JFK Terminal 7.  Icelandair departs from JFK... Terminal 7.  So my turn-around basically involved walking out to the terminal, picking up my baggage at baggage claim, making a right turn, going up a set of stairs, and walking straight up to the Icelandair departure agent and checking the same bags right back in. ;-)

From there, it was straight over to my departure gate where there were two flights to Iceland departing 10 minutes apart from sequential gates.  My flight was leaving from Gate 1.  As I walked up, the Gate 2 agent was paging... Mittens.  Heh.  Well, not "Mittens", of course, but Mittens by his real name.  I got on my phone and cheerfully tweeted...


In other news, I'm within 25' of Mittens and the universe hasn't imploded. #tweetfleet

Mittens, meanwhile, was having the same issues I was.  So there wasn't an opportunity for me to walk over and introduce myself as he walked up just in time to board his flight.

So, get on the aircraft, takeoff, all the usual stuff.  Trebor Daehdoow warned me that Icelandair seats are... as I believe he put it... "formed from native Icelandic lava rock."  Yeah, confirmed.  Simply awful seats: hard, uncomfortable, and terrible for one's back.  It didn't help when the flight attendant informed all aboard that our aircraft was named after a volcano.  I laughed before I could stop myself.  Then I pulled up the seat display moving map to find that the primary landmarks available on the display were shipwrecks resulting in massive loss of life.  I wish I was making this up. 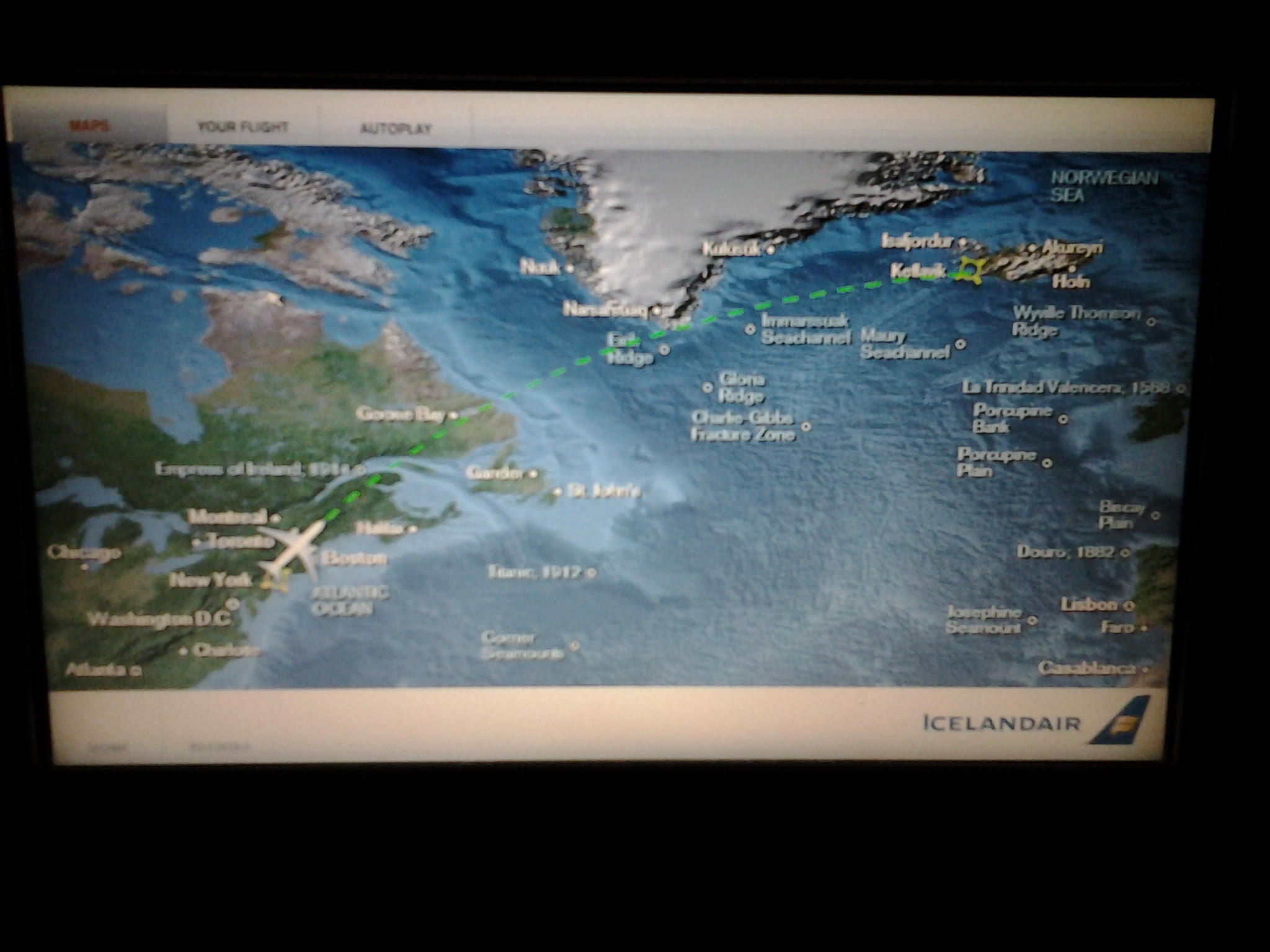 Landed in Reyk, made my way through the airport.  Those who commented on my customs post saying that the "red line" for Icelandic customs meaning that you have additional items to declare isn't staffed in the mornings?  Also confirmed.  Nobody could have stood in the red line had they even wanted to, and I shot into the duty free store, picked up what I wanted there, picked up my luggage, and went through customs like a missile.  To be greeted by this... 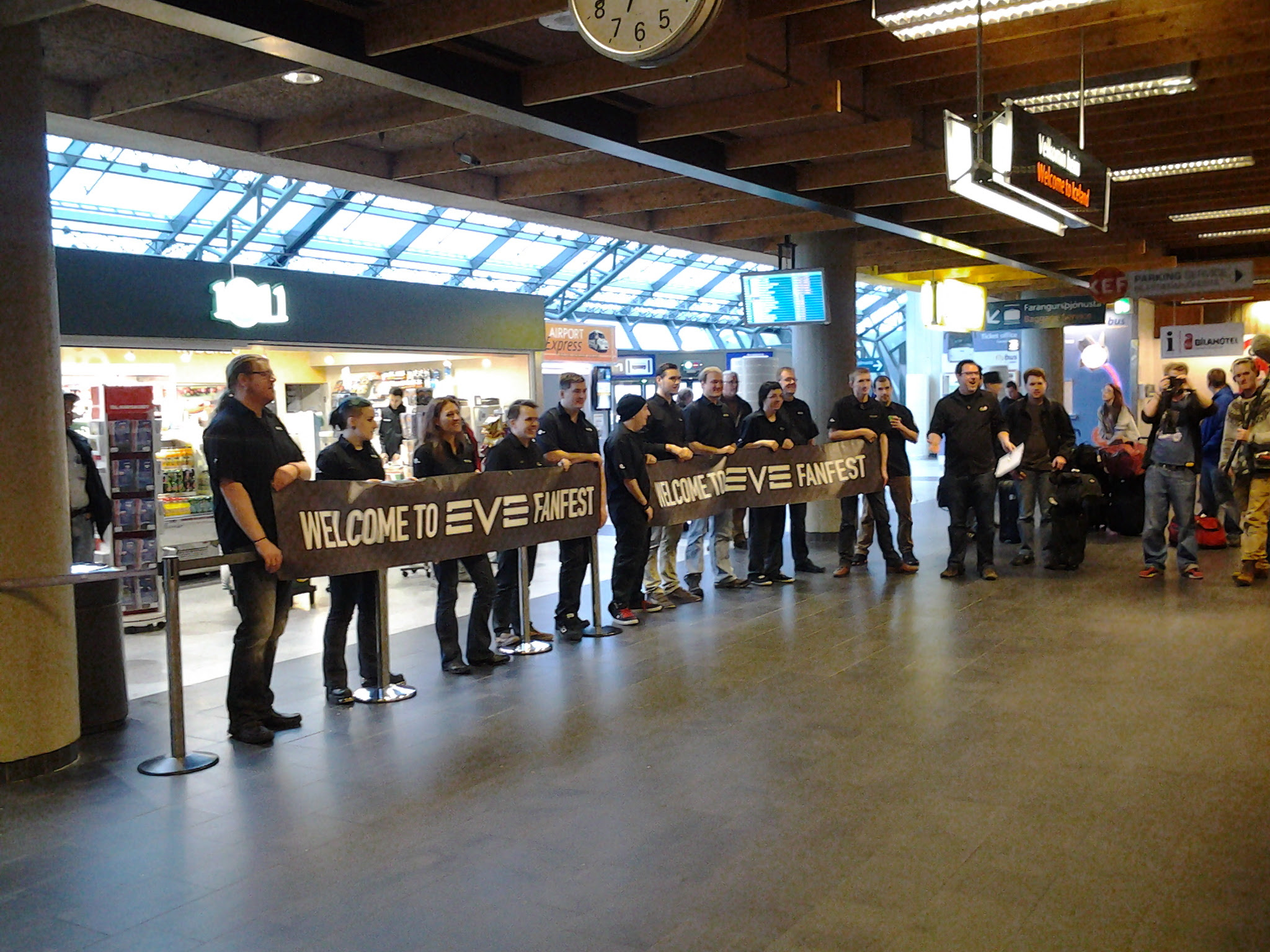 CCP Guard, CCP Fozzie, and a host of others holding up signs welcoming the new arrivals to Fanfest and offering us seats on the "party bus" into town.  I had to decline this offer as an alliance-mate had already graciously offered to pick me up at the airport.  As it turned out, he was also picking up two others so it ended up being five of us humorously crammed into a compact car along with all of our luggage.  I'm sure a picture of it will turn up eventually.  I got some mileage by waving cheerfully at drivers and pedestrians looking into our car in disbelief.

Had breakfast with the very same alliance-mates, and who walks right past the place where we're eating but Mittens again!  Guy won't leave me alone.  ;-)

Anyway, off to wander the streets of Reyk!
Posted by Jester at 4:30 AM