Go tell it on the mountain

So, in a lot of recent interviews, CCP Unifex has appeared positively giddy about the success of the Retribution expansion.  He's implied fairly frequently that it's one of EVE's most successful expansions.  Is he right? 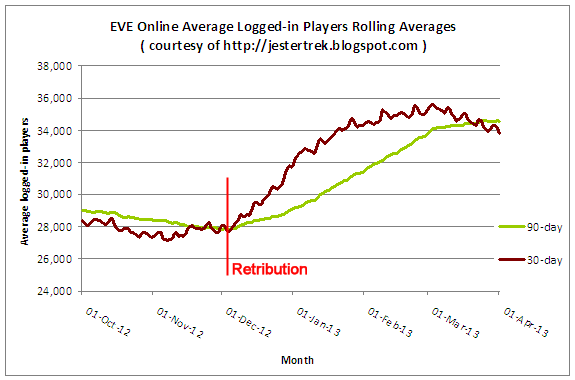 Keep an eye on logged-in players as I do and you see something startling and encouraging: people have been logging in to play Retribution in massive numbers.  Here's the standard table that I've been producing every few months for the last couple of years on this subject:


Just to refresh your memory, each expansion is listed with a signature feature, and +30D, +60D, and +Next percentages.  Each corresponds with the growth in logged-in players.  +30D is 30 days after the expansion's release, showing initial excitement about the expansion.  +60D sometimes shows an initially exciting expansion dying off some (Tyrannis) or growing even more because of positive word of mouth (Trinity).  +Next is where the logged-in user base is when the next expansion is released, showing the final success or failure of that expansion.

Retribution hasn't just been successful, it's been an outstanding success, the most successful EVE Online expansion through its hey-day at getting players to log in since Incursion.  In terms of improvement to the overall logged-in player count, you have to go all the way back to the Empyrean Age/Quantum Rise expansions of 2008 when many of us -- including myself! -- started playing this game for the first time.  Unifex and his team are to be congratulated, particularly since at first blush Retribution looked like it was going to be a pretty lackluster expansion in terms of CCP's ability to market it.

EDIT (18/Apr/2013): Oh!  One other thing: CCP Fozzie assures me that these numbers do not include DUST 514 players and reports that the API does not yet publicly provide DUST players logged in.

A big question remains: where did all these logged-in players come from?  Are these returning previous EVE players being brought back to the fold, or brand new up-and-coming players?  My graphs can't answer that question.  Only CCP has that data.  My guess?  A bit of both, with a strong return of past players eager to play with the work of the ship balancing team, with the bounties as a nice side bonus.  Still, whatever the source, it's encouraging to see.  On the historical graph going back to 2006, the Retribution expansion towers like a mountain: 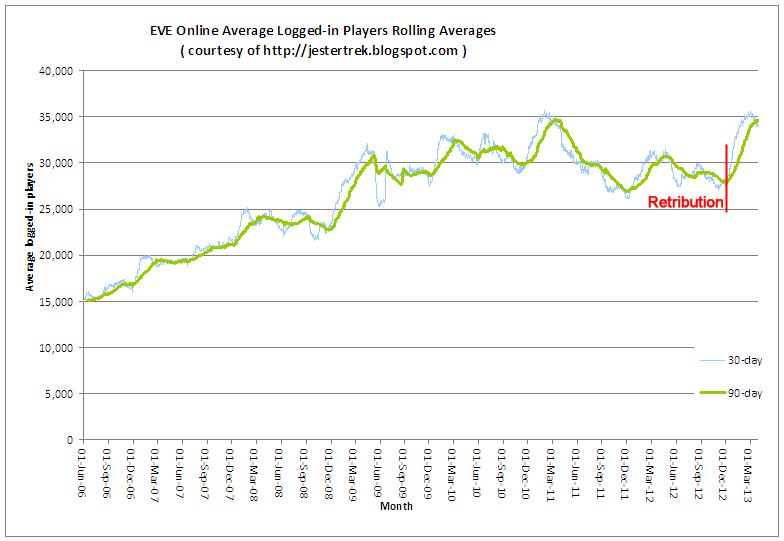 You can view this chart with the past expansions and year markers in my previous post on this subject, and I'll update this chart for 2013 toward the end of this year as is becoming my custom.  But it's sure nice to see Retribution in its current perspective.  The comparison to the Incursion expansion is obvious, though Retribution doesn't appear to have quite the staying power that expansion did.  You can already see a bit of falling-off of logged-in player numbers in advance of Odyssey.  This is perfectly normal, and something we've seen in EVE expansion after expansion.  People log in by the thousands to play the new game, but after they've exhausted the possibilities, it's time to give them even more.

Still, if Odyssey can retain and build on Retribution's success, we'll be in a period of EVE's history with more active players than any before.  And just maybe we'll be able to put the long flat-lands behind us and look forward to some long-term growth.  Here's hoping!
Posted by Jester at 4:32 PM