POTW: How was your weekend?

Almost every EVE PvPer has a screen-cap like this, and now I have a new one: 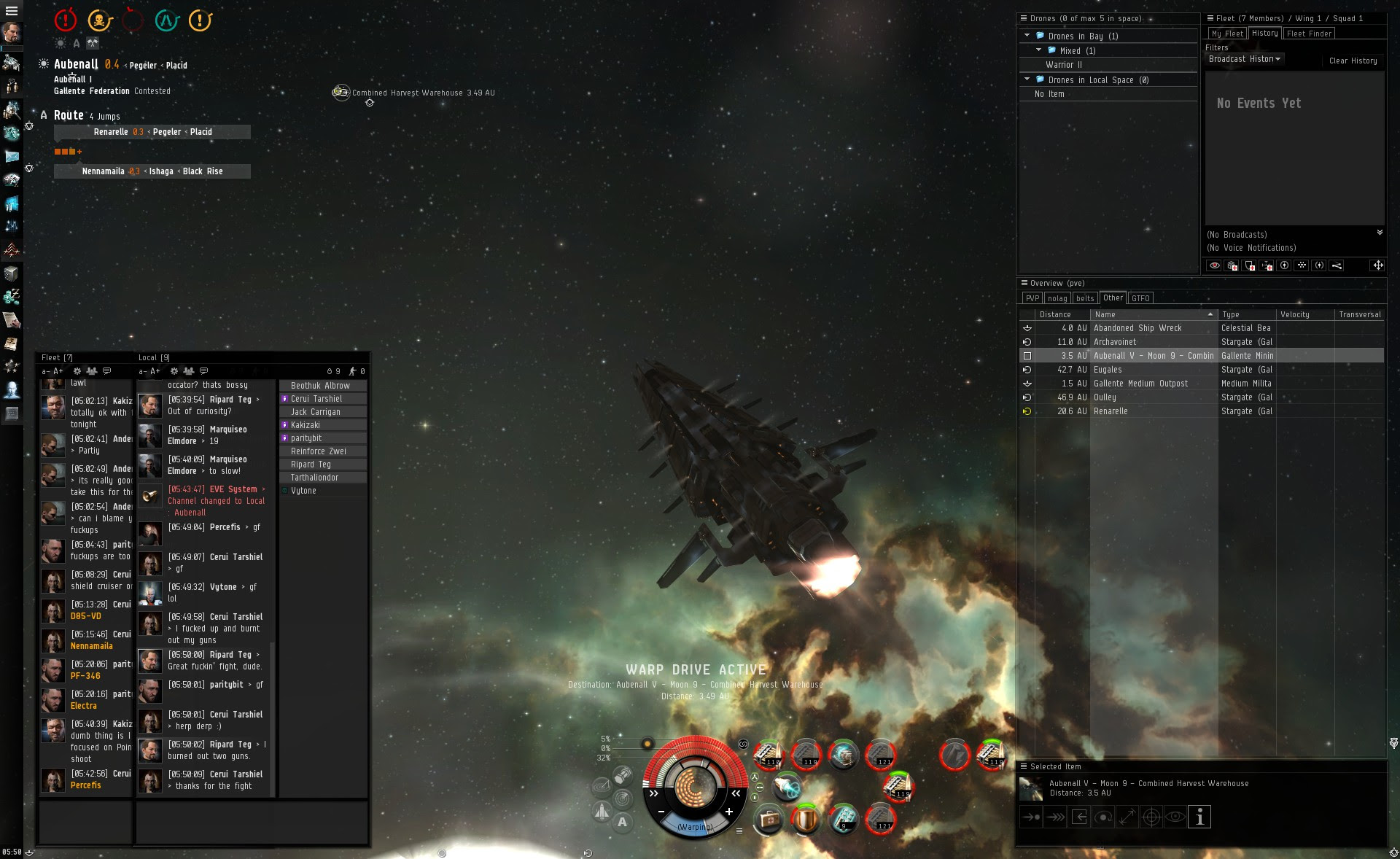 I'm not one for writing battle reports, but I think I'll write two today, just to prove I Play This Game(tm).  This fight started with a Rote Kapelle very small gang (we had four: me in a Cane, Brutix, Harbinger, Caracal).  We encountered an ExodusDOT Prophecy sitting a bit off a low-sec gate.  Exodus is a small alliance, but mighty, particularly in the small-gang setting where they've been a AT contender.  They've got some great pilots and some great tactics and this was no exception.

Our scout engages on the Prophecy and calls the rest of us in.  He is the aggressor, so he draws gate-gun fire.  Once the rest of us come in and as we're burning in, a second Exodus Prophecy warps in landing just off his buddy.  I can see right away that they're HAM Prophs, and since I have one of these myself, I know that:
And sure enough, both Prophs put Ogre IIs out.

Our Brutix is tough, but he's shield-scram fit, taking fire from two Prophs, is scrammed himself, and is taking gate guns.  It's a monster DPS fit, but slightly thin.  He doesn't last very long at all.  But through a lot of over-heating, we're able to break through both the self-rep and a remote rep and knock down the first Prophecy almost immediately after our Brutix dies.  This is really lucky because our Harbinger gets wildly over-aggressive, loads Conflag ammo, burns in on the second Proph and gets himself scrammed.  The Harbinger is also a shield fit, with two LSEs and no resists.  The Proph Ogres and Hammerheads start going to absolute town on him since a Harbinger's thermal resist is 30%.  Ouch.  It's depressing to watch how fast he goes down.

That leaves myself and the Caracal, and we're both point-fit and keeping a bit more distance.  I've got Fusion loaded and am using Hobs in this Cane fit.  The Ogres come after me but I keep my MWD burning and so am able to outrun some of their DPS.  But since we're still the aggressors, I'm taking gate guns and he isn't.  Even with my ASB (which I had to pulse occasionally to mitigate the gate gun damage even before he starts shooting at me), he out-tanks me by a wide margin and so you can see how close it was.  ;-)  To take him down, I need both our Caracal's help and I dangerously over-heat my guns which start in two groups, but I end up going from 70% to 100% heat on one group and 80% to 100% on the other, burning out three of them a few seconds before he goes down.  Fortunately, I remember to break the gun groups to reactivate the ones I didn't manage to destroy.  I only manage to activate one gun before our other DPS finishes the job.  I warp off before the gate guns can finish me.

Definite derps on our part, but it was an epic fight!  Big props to Exodus pilots Vytone and Percefis.  gf, guys!
Posted by Jester at 8:27 AM