Since I'm in a battle report mood, let's do one more and then I'll go on to other things.

Unlike my usual occasional BRs, this is one where Rote Kapelle lost, and lost quite badly.  The kill report itself is very confused with three separate fights, so I'll have to explain the relevant bit.  Scroll down some and you'll see that Rote lost four attack battle cruisers, a cruiser, a Scimitar, and a little pile of pods.  The aggressors for this particular fight were a UsurperDOT Sabre and twelve or so stealth bombers, ten of them Hounds.

I wouldn't normally talk about bombing runs, but this one was executed with such slick precision that it deserves a closer look.  Unfortunately because of the ship I was in, I had to watch the whole thing without being able to contribute or help the victims at all.  So I'll help in the one way I can: describe what was done to us so that you can learn from it and perhaps prevent it from happening to a pile of your ships.  Yeah, this post is mostly for null-sec newbies.  You vets can move on to the next post if you like.  Anyway, here's a diagram of the attack: 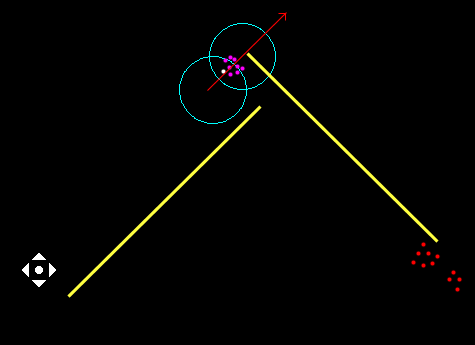 The white figure in the lower left represents the stargate our fleet was warping toward.  The red arrow at the top center points back toward the gate we were warping in from.  Both yellow lines are 30km long.  On the stargate was our scout.  It's typical for small gang fleets to have a scout and for this scout to run one jump ahead of the fleet.  In this case, a Sabre with a cloak (probably fit similarly to this Flycatcher FOTW from 2011) was sitting at the location marked by the bottom of the red arrow.  As soon as he saw Local starting to fill up (with our fleet), he decloaked and launched one bubble (marked by the blue circle closest to the stargate figure).  Then he began flying in the direction of the red arrow.

At the edge of the first bubble, he deployed a can with one round of ammunition in it (the white dot on the diagram).  He then continued along the path of the red arrow until he was about 7000m from his dropped can and dropped a second bubble (marked by the blue circle farther from the stargate figure).  Meanwhile, our fleet was in warp.

Bubble mechanics dictate that if a bubble is dropped before you go into warp toward a celestial and the path of your warp will cross the location of the bubble, you will land at the edge of it instead of at the celestial.  Your inertia will then carry you a certain distance into the bubble defined by your ship's mass; heavy ships are carried farther.  In this case, our fleet was relatively light attack BCs which were carried only a short distance into the first bubble.  Our fleet is marked by purple dots on the diagram.  But because the second bubble was launched to overlap the first, our fleet was fully enveloped.

And that's when the first wave of bombers decloaked.  They're the red dots on the diagram.  They all start cloaked about 35km from the can, using their directional scanner to see our fleet come in.  When our fleet appears on short scan (and once the Sabre's can is deployed), they align toward the can.  When the can is a little under 31km away, they decloak and launch their bombs.  The first wave of bombers is about seven ships, all with Shrapnel bombs.  These seven kill two pods traveling with the fleet (don't ask), all the attack BCs and the Scimitar, leaving only a Rupture alive and badly damaged.

So that's it: a more or less perfectly-executed bombing run.  The hardest job is the Sabre's and this Sabre pilot did his job well.  Comments?  Questions?  Additions?
Posted by Jester at 10:17 PM