There were lots of little notes, pictures, and such that didn't make it into one of my main Fanfest posts while I was in Iceland that are still kind of amusing, so I thought I'd do a little bonus junk drawer post full of them.  Here goes... 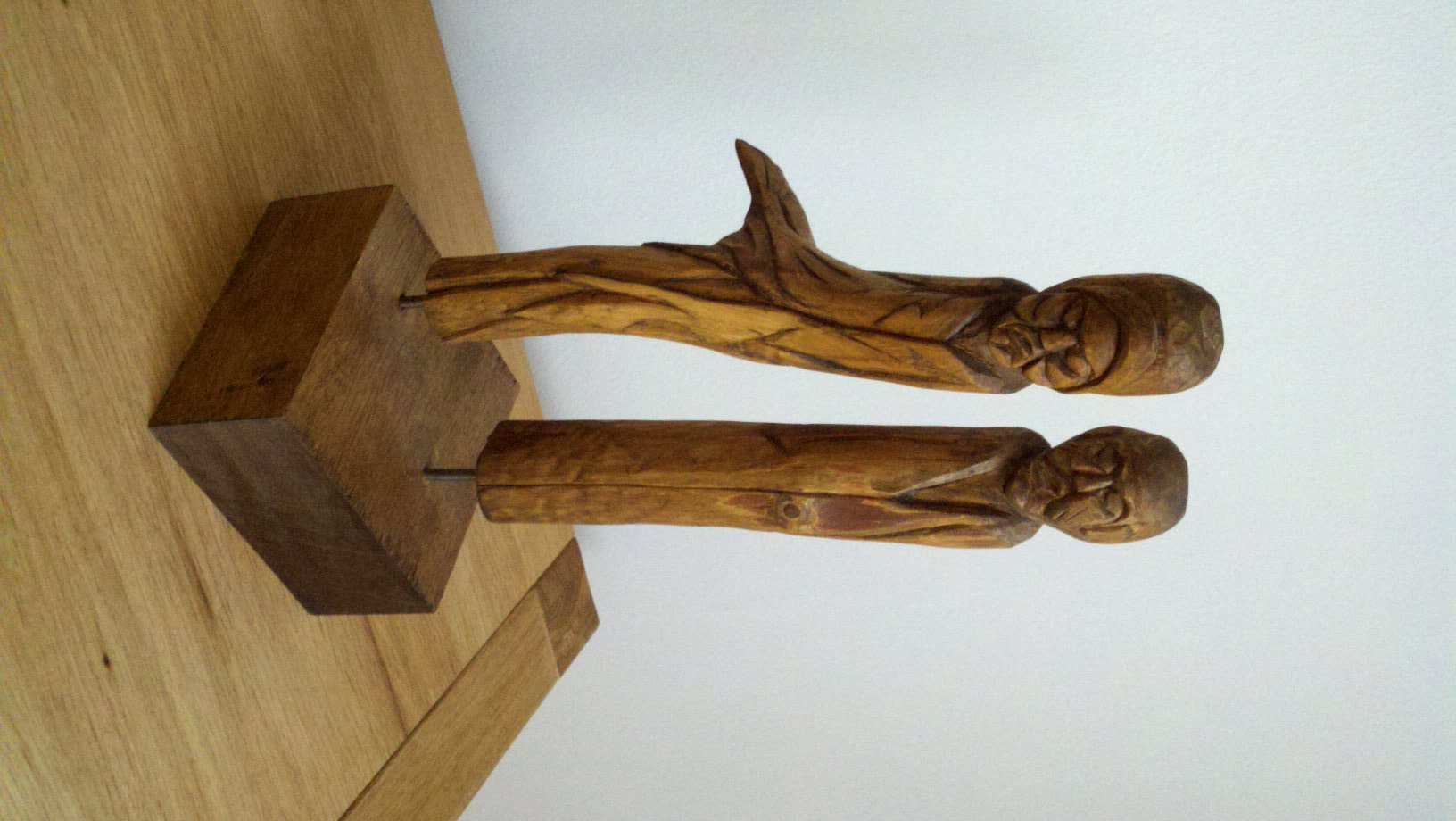 The picture at left was one of four primary pieces of art-work inside my apartment in Iceland.  Yes, as far as I could tell, it depicts exactly what you think it depicts.  Iceland is weird.

My apartment was about three-quarters of a mile from the Harpa venue, and about the same distance every other place I wanted to go in Reyk.  If you go to Fanfest, plan on doing a lot of walking.  In particular, a lot of the more interesting places to go in Reyk involve walking up and down a lot of hills so plan for that, too.  I brought hiking boots for my Golden Circle trip, and these turned out to be essentially unnecessary, even in the snow.  The GC destinations either have good walking paths, actual wooden footpaths, or both.

Wireless Internet access in Iceland was invariably massively overloaded by Fanfest attendees.  When I wanted to write, I had to go back to my apartment to do it, and lots of times I was just out of contact from Skype and Twitter entirely during the day.  This is something I'll have to plan for better next year.

Two quick notes about the water: yes, the hot water smells of sulfur but the cold water does not.  This is because there are two different sources for hot and cold water.  I'm certain every Icelandic recipe that involves water instructs the cook to use cold water and then heat up that cold water rather than saving time by using the hot water.  Guess what?  Occasionally, an Icelandic cook skips this step.  It makes your food smell the tiniest bit odd both on the way in and... ahem... on the way out.  The Icelanders don't seem to mind, or maybe they just don't notice.  The sign in my bathroom apartment said that people stop noticing the smell of the water after a few weeks.  I wasn't there long enough.  ;-)

At home, I enjoy really hot water and often I can't get it as hot as I like.  No problem with that in Iceland.  I was there long enough to really appreciate hot hot water even from public bathroom sinks.  The shower in my apartment came equipped with a knob to heat up the shower up to about 40C.  If you wanted hotter water than that, there was a little red button you could push that unlocked the knob and allowed you to use hotter water.  I really came to appreciate that little red button.

The EVE VR game being demoed at Fanfest was incredible.  That said, I don't know that I have a whole lot to say about it.  Would I love to see something like this deployed more broadly in the EVE universe?  You bet!  Can I see an easy way to do it?  Nope.  The whole thing struck me as an incredibly fun but incredibly impractical toy.  Short version?  I think we're a few more cycles of Moore's Law away from this being practical or consumer-ready.

During the Golden Circle tour, I had the opportunity to sit next to and chat with a long-time high-sec EVE player who had come to Fanfest partially to look for a corp that would help him migrate to null-sec.  After learning his experience and goals, I did my best to point him toward a compatible one.  But I also casually asked him about the CSM election, curious as to who he might have voted for.

Did he vote?  Yep.  But he couldn't remember who he'd voted for.  He did say that he refused to vote for any of the bloc candidates, was mostly looking for candidates that supported newer players, that he eventually voted for four candidates with all of his accounts... but that he also refused to vote for any men running for CSM under female avatars!  Needless to say, I found this last condition really charming.  ;-)

After he shared all this with me, he asked who I had voted for at which point I cheerfully admitted that I was one of the candidates.  "Oh no!" he cried.  "You didn't run as a woman, did you?"  I laughed at the phrasing of the question and assured him that no, my avatar was male, I wasn't a bloc candidate, and I was quite new player friendly.  We agreed that he might have voted for me.  The whole conversation struck me as really funny.

Same guy had a classic quote about the current scanning tools (of which he is not a fan): "If fishermen had to use this interface for their fish scanners, they'd never find a fucking fish!"  Hee!

I expected to have a lot more to say about the CCP office tour I got on Sunday, but I really don't.  It's just a pretty typical software development company space, full of computers packed way too tightly, the occasional board game, and lunch rooms on practically every level.  I took a couple of fun pictures.  Here's the glass door behind which CCP Dolan (John King) sits... 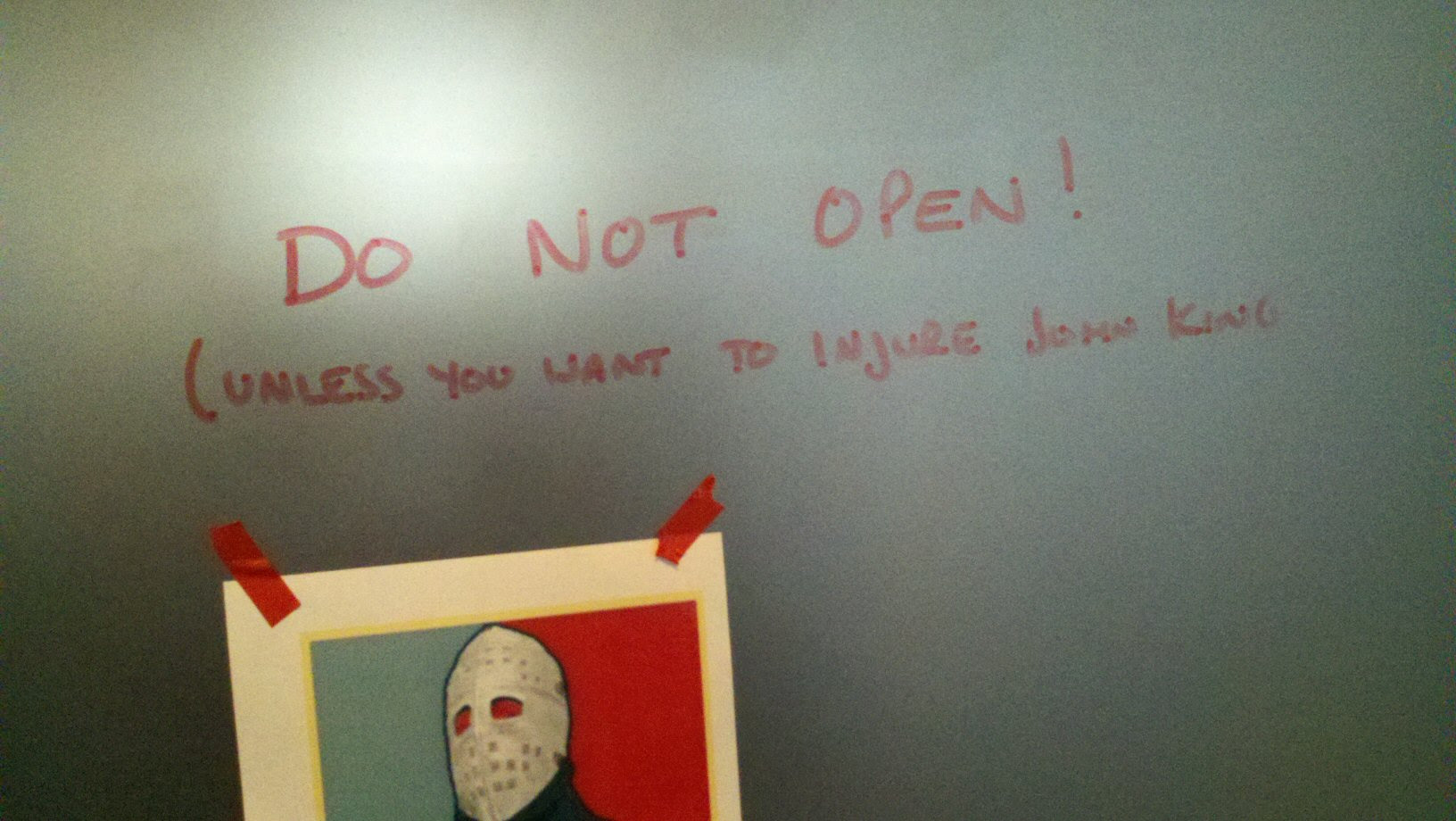 Here's The Wall that you've seen now and again.  It's in front of the reception desk. 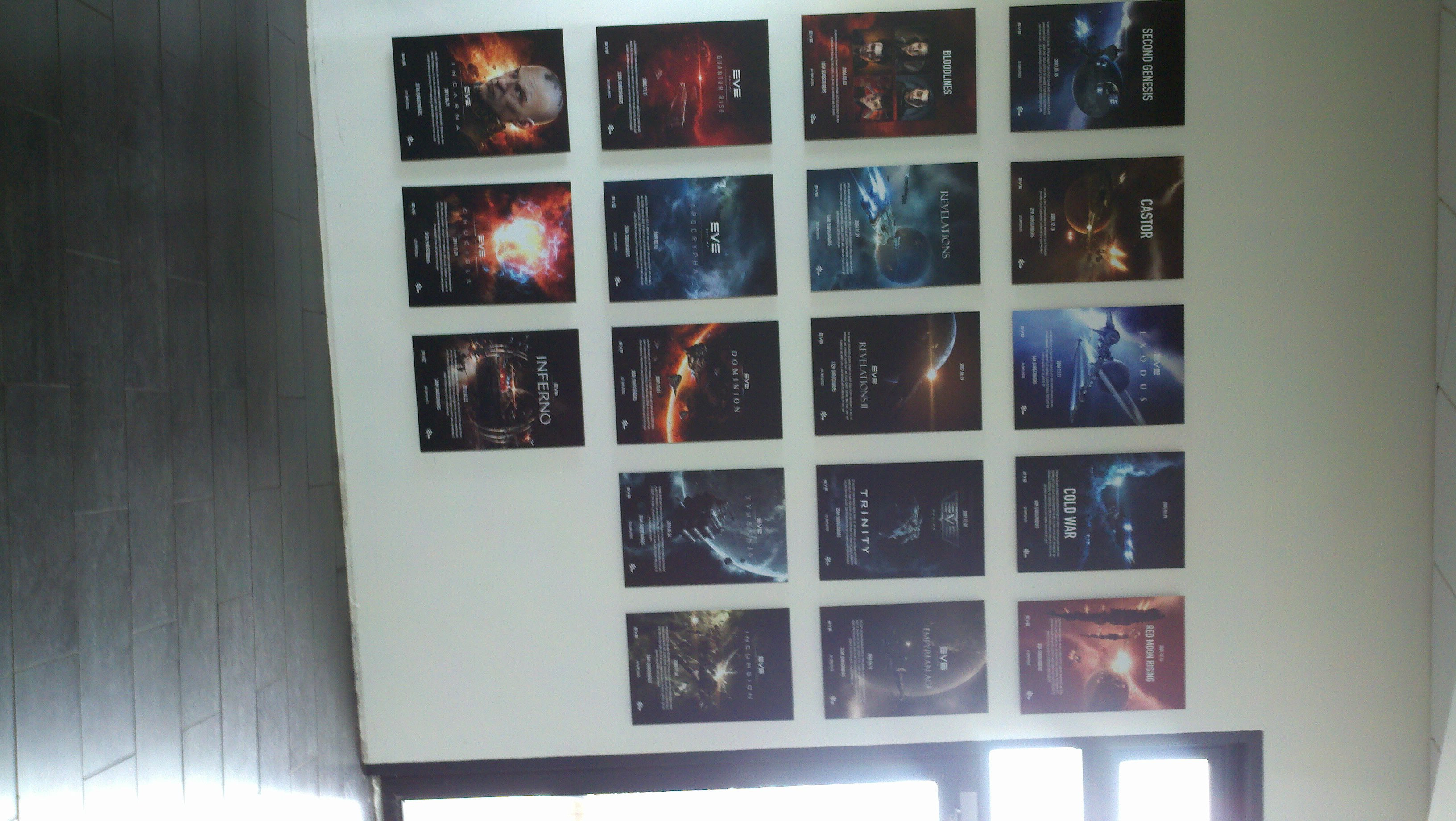 Fun fact about all of those posters?  Each one depicts the number of subscribers EVE had at that time... and the number of employees that were working for CCP at that time.  I'm told the Retribution poster had a scratch on it and is being replaced/repaired before it goes up.  This is off my cell phone camera.  I'll bring a better camera with me to the first Summit.

Best part of the office tour for me?  The Art department.  Not only do they have the nicest area in the building, but if you walk alllll the way to the back, there's a little walled off area that shows the list of art assets being rebuilt and the status of each.  Each asset is represented by a post-it note with a little picture of the asset.  The grid itself shows the various stages of rebuilding an asset: rough modeling, fine modeling, animation modeling, rough texturing, fine texturing, and "Jessica", a stage for loading it into CCP's actual test tool, I assume.  Art assets to the left of the grid are slated for rebuilding.  Art assets on the grid are in process.  Art assets to the right of the grid are complete.  To the right were lots of things you'd expect, the new Tempest, the DUST District satellite, stuff like that.  Currently on the grid and farthest to the right was the new Apocalypse showed off at Fanfest.  Stuff to the right of that that was on the grid?  Stuff to the left of the grid waiting their turn?  Not telling.  ;-)  I'm sure that wall is very much under NDA.  But I will say there's lots of fun stuff coming.  If you ever get an office tour yourself, make sure to walk alllll the way to the back of the Art department.