What's in a name?

News flash: every time CCP has publicly hired an EVE player to be a CCP dev, it's been controversial.  Not just this time, every time.

For Heaven's sake, CCP Soundwave is one day shy of his fifth anniversary with CCP, and I still had someone tell me at Fanfest this year that they didn't feel comfortable with "a Goon" making game design decisions.  It was controversial when CCP Sreegs was hired.  It was hugely controversial when CCP Dolan was hired.  Hell, it controversial when CCP Fozzie was hired; I know for a fact that some people believe that he's balancing ships to the benefit of his former comrades in Pandemic Legion.  Only CCP Rise has escaped controversy and even he hasn't escaped it entirely.  People were annoyed that he wouldn't be making PvP videos any more.  ;-)

Only CCP employees that keep past in-game affiliations nearly or completely secret (such as CCP Unifex) escape this kind of controversy.  And in every single case above, each new CCP dev above took pains to distance themselves from their pre-CCP lives.  Rise could have easily requested the name CCP Kil2 and would have received it.  It might have made perfect sense, in fact, increasing both the audience of the videos and CCP's stature in picking up a known community leader.

How do new CCP employees pick their names?  CCP Veritas and Rise answered the question themselves recently:


Veritas: We pick 'em. It's an extremely stressful decision.
Rise: I spent like 2 months thinking about it and I'm pretty sure I would have spent a couple more if I wouldn't have had to pick now.

The name is checked with CCP management to ensure it's not going to be offensive and if it passes that check, that's that.

If you haven't heard CCP's latest hiring decision, CCP has hired Mintchip as a member of the DUST 514 Community team.  And it went public pretty quickly when Mintchip herself announced it on Twitter to a mix of both acclaim and abuse.

Now as I said, hiring any EVE player in public is going to be controversial but hiring Mintchip is doubly so.  Mintchip is a controversial figure even without being a CCP employee.  She is beloved by thousands and thousands of gamers, more than 25000 of whom have subscribed to her Youtube channel.  She is a strong woman, sure of herself and her opinions, and that sometimes draws fire in the male-dominated video game industry.


But she also has thousands of opponents, who dislike her for what they perceive as a lack of knowledge about both EVE and DUST 514 as well as her actions within EVE.  She's not above stirring up drama, and she's not above using her position as an EVE personality to try to enrich herself personally.  This might be common in other communities but is not the norm with EVE personalities.  Needless to say, she has taken fire for this.  The problem is Mintchip generally responds to this incoming fire by implying that the only reason people don't like her is because of her gender.  And the more serious the accusation, the more likely she is to fall back to this defense.  Die Hard With a Vengeance has a lovely dialogue exchange that shreds this sort of straw-man...

Now, absolutely granted, some of Mintchip's accusations of sexism are warranted because she has drawn a lot of unfair and cruel sexist attacks.  A lovely example is her profile on evewho.com.  Within hours of it being up this week, it was full of any number of disgusting attacks in the comments that I simply won't dignify with a description.  evewho.com pulled the comments with the following note:


EveWho fully recognizes and endorses Eve Online's EULA and multiple violations of this have occurred, therefore, comments for this page have been disabled.

And that was 100% warranted in my opinion.  Many of the comments were unworthy of us as EVE players.  "EVE needs women!", we've all been known to shout from the rooftops from time to time, including myself.  But if EVE players are going to act like disgusting middle-schoolers when a woman appears and starts playing our game, I don't blame the ladies for avoiding our game after this behavior starts. 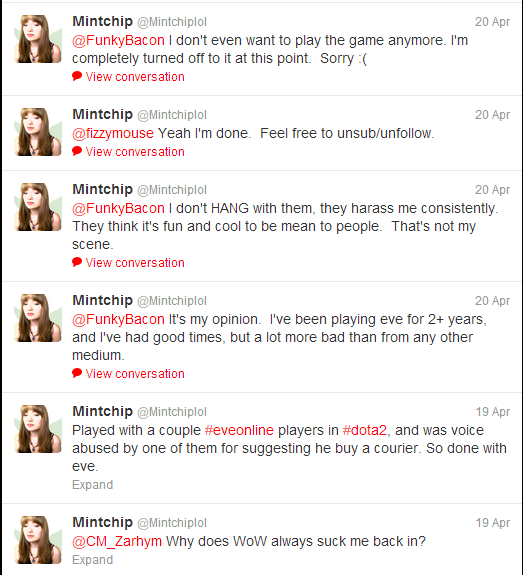 All that said, Mintchip has also used these sorts of attacks to engage in "woe is me" behavior that, in my opinion, is detrimental to the efforts of women in gaming attempting to be taken seriously for their ability to kick ass and take names.  Now I assure you, everyone reading this blog post will -- sooner or later -- lose faith with EVE for one reason or another and rage-quit.  I've done it myself.  But it's a bit of a strain to say you don't want to play the game any more and are completely turned off to it... then four weeks later apply to a job at CCP.

As someone well-versed in the ability to believe two contradictory things at the same time, I bow to a master.  ;-)

Mintchip's hiring and announcement was greeted with both massive enthusiasm from her fans and unthinking rage from people who don't care for her.  And to be fair, she's going to be working as a DUST 514 (and World of Darkness?) Community person rather than a member of the EVE Community team.  Still, an initial thread on the EVE Online forums about her hiring grew from three pages to 28 pages to 50 or 60 pages in a matter of hours.  For a long stretch, it was growing at three posts per minute, so you can judge for yourself the... ummm... enthusiasm that some people had for the topic at hand.  The thread quickly got out of control with attacks both sexist and otherwise and CCP was forced to all but delete the thing and lock it down.

The Mintchip thread on the DUST 514 forums is nowhere near as active but also addresses some of the controversy.  To his credit, CPM member Nova Knife stepped in as a calming influence, posting among other things that...


However, what you guys need to consider is that what you have seen of her in the past is simply an e-persona, and not something that indicates how she may or may not be in real life.

I can only hope she knew what she was getting herself into when she accepted the job.

From some of the posts, I assume that CCP has been busy moderating that thread but at least the thread isn't locked.  EVE News 24 is also covering Mintchip's hiring with one of their open threads which is also drawing a lot of commentary.

Nova Knife brings up a really good point, though: the Mintchip that all of us are familiar with is a persona, not a person.  But it's that very thing that has caused every previous EVE player hired by CCP that I'm aware of to separate themselves from their in-game past by choosing a CCP name quite different from their previous in-game name.  CCP Mintchip chose not to do this, even to the point that she's continuing to use her pre-CCP Twitter account as part of her official CCP forum signature.


CEOPyrex, who produces a regular series of well-regarded DUST 514-related videos, has a theory as to why CCP chose to hire Mintchip.  And it's not pretty, and it's not complimentary to CCP.  He is, in fact, convinced that this hiring is reverse sexism on CCP's part.  He theorizes that CCP was willing to exploit Mintchip's appearance, persona, and reputation as a means to draw "frat boys" into DUST 514.  As he puts it -- I'm paraphrasing only slightly -- "Here boys, here is an EVE player!  Isn't she nice?  Isn't she pretty?  Don't you want to join her in our game?"  It's a depressing theory.  I don't think it's true.  But a lot of people will be quick to believe it.

Anyway and finally, if you want to see an unmoderated view of one audience's feelings about Mintchip, there's a full-on Reddit thread with more than 600 comments and 450 upvotes.  It's a huge amount of reading but provides the broadest possible view of both people who support Mintchip and people who do not.

For myself, I'm willing to give her a chance.  Doing her job and doing it well will be the best possible revenge against her haters.  The one thing that most of the EVE players that have become CCP devs have in common is that whatever their flaws before joining CCP, they have been a positive force in the company and they have been successful in the long term.  So the odds are in Mintchip's favor here.  The real test will happen in the coming weeks and months as she settles into her new job once the initial burst of controversy dies down.
Posted by Jester at 6:05 AM