AT11 Day Three: The elimination bracket

Here's where things get a little exhausting for a lot of teams.

There are 22 matches tomorrow.  Things open with the final two matches from the "best of 16" in the winner's bracket (both of which should be really good matches).  But then things go into the loser's bracket with eight immediate matches.  By the time those matches begin, there are going to be 16 teams in the first "double slot", plus eight more teams waiting in the wings to take on the winners of each of those matches.

Short version: there are going to be a full 16 loser's bracket matches, with a full ten of those teams fighting twice tomorrow:
As a result, 16 teams will be gone before we finish out those first 18 matches of the day.  We'll be saying good-bye to a new team every match from 1530 tomorrow to 1945 tomorrow.  That's pretty brutal, particularly if you're one of the eight of ten teams that has to fight twice tomorrow just to stay alive.  This is the big reason Rote's been wanting to stay safely in the winner's bracket: for every match you have to fight in the winner's bracket, someone in the loser's bracket has to fight twice.

That becomes tiring in a big damn hurry, plus you're giving other teams an enormous amount of intel in terms of your pilots, ships, and comps.  You also don't have any time at all to research your opponents as they are thrown into your path in quick succession.  Whomever wins the loser's bracket will have taken a long road to do so.

Matches I'm looking forward to tomorrow:
As you can see, lots of really good matches on the docket for tomorrow!  Can't wait!

Let's talk about some of the fun stuff that happened today.  Most amusing match of the day was this one between DarkSide and Darkness of Despair, a ten minute turtle fornication between Dominix-based tinker tanks.  It took nine minutes and 40 seconds for something to die: 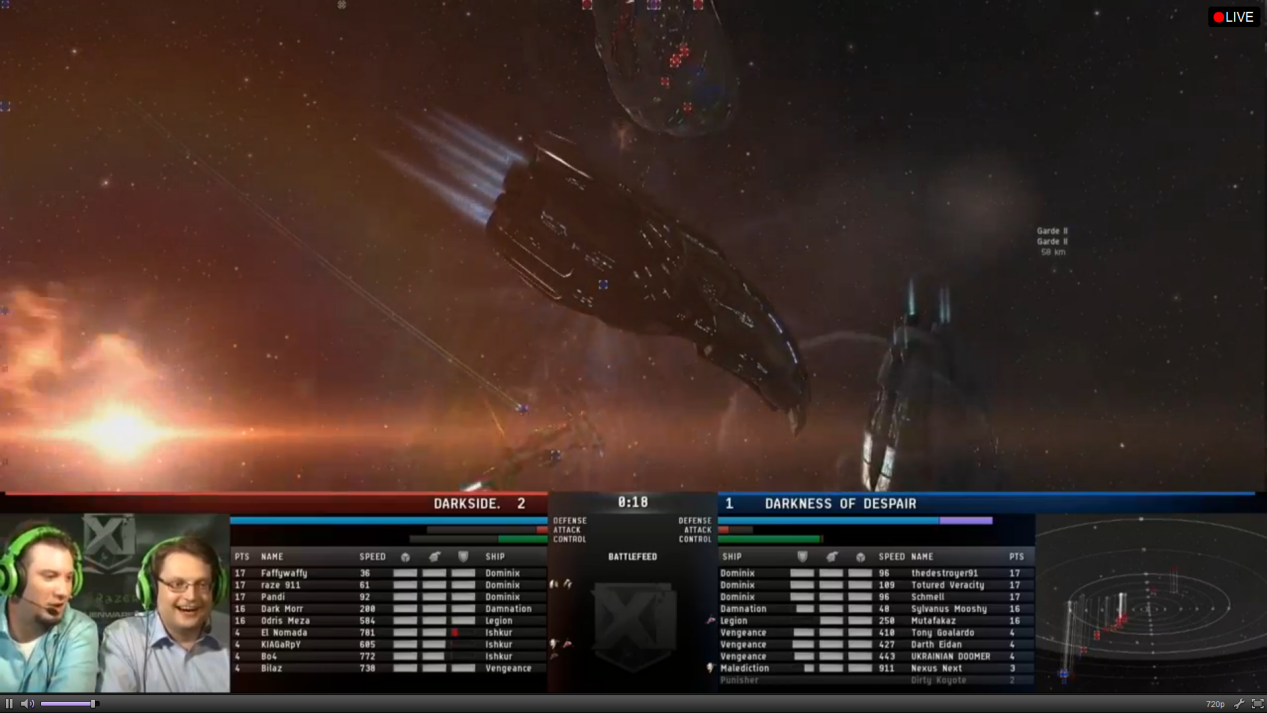 I joked to CCP Veritas that Rote Kapelle wants to use one of our ship bans tomorrow to ban energy transfers, which make these kinds of matches possible.  DarkSide won it, 2 points to 1.  It was not a fun match to watch despite the expression on Shadoo's face here.  ;-)

Speaking of Shadoo, he got a lot of mileage today out of "it's hot in the commentary booth" jokes.  He kept comparing the booth to the inside of a volcano, the center of a desert, on the surface of the sun -- those lights were pretty bright -- all sorts of things.  And the jackets required in the studio were gone in the commentary booth by the end of the first match.  All the commentators did great jobs today, I thought!  This is the best year for commentary we've had in the Alliance Tournament and I don't just say that because I've got two alliance-mates doing the commentary.  Or at least not only because.  ;-)  Everyone commentating is manifestly knowledgeable, smart, well-spoken, and they're catching almost all of the nuances of each match and they're communicating them in a way that makes sense to both new players and vets alike.  Bravo, guys!  Next year's commentary team has a tough act to follow.

By the way, during the DarkSide/Darkness match, CCP Rise had the quote of the day though I didn't catch it exactly.  But after ten minutes of nothing followed by a few seconds of explosions, he quipped (paraphrased) "That match was a metaphor for EVE Online in general: you wait a long boring time for something to happen and your wait is finally finally rewarded by a few seconds of amazing excitement."  Ain't that the truth?

In the twitch.tv chat stream, there was this little bit of gold talking about Bacchanalian (a noted The Mittani twin) and Shadoo during their commentary:


ryu_ibarazaki :  Left guy is Giant Mittani, a professional wrestler from Japan.
soulsniper845 :  shadoo and mitani on commentary.... like watching the the devil and an imp plotting evil....

Congratulations to three new members of the "Bad Tournament Logistics Hall of Fame":
Enjoy your membership cards, guys!  Also, Congrats to Tankmug of Shadow Cartel, for "flying" an entire AT11 match without using his engines at all.  He might have MJD'ed once.  Other than that, stationary for the entire match, heh.

Finally, the new CREST interface into AT matches is pretty freakin' nifty.  If you're so inclined, check it out.  There's also a great informal CCP stats page that's great fun.