Sigh.  What can I say?  We gambled and we lost.

OK, I can say a bit more.  Once the bans were in -- and we followed a pretty conservative banning strategy that mostly revolves around "we think tinker is fascist and more importantly, boring" -- we had a brief strategy discussion on how to respond to the ban of both T2 armor logistics ships.  I should talk a bit about how bans work first: 45 minutes before your match, you're contacted by a CCP GM or employee.  He greets you, asks you to set up a fleet and identify the fleet boss, and identify the beacon you'd like your team to appear at.  Then he lets you know you'll receive the ban interface. 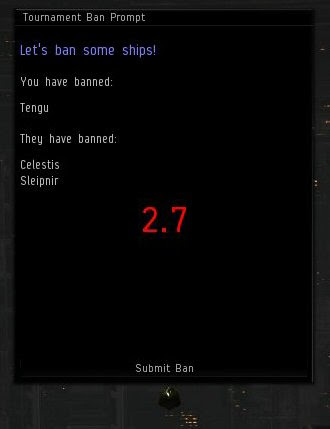 The ban interface is a little app that runs within the EVE client.  It's got a 60 second timer in bright red letters, plus a drop-down box with a list of every legal tournament ship in alphabetical order.  Once you've completed your bans, you have about 30 minutes until your fleet is teleported to Jove space... ready or not.  As a result, you don't have a whole lot of time to decide what comp you're going to use (more on this on Friday because this is going to be a big topic next Saturday).  For various reasons, we really wanted to run the basic comp that we ended up running with the Geddon/Vexor Navy Issues.

So the question was: do we try to push the comp with a T1 logi?  We felt like R0NIN had banned armor comps because they were concerned about armor-based Dominixes and Geddons... but they didn't want to see our Brutix Navy Issue comp either.  In that way, banning the armor logi was a great way of dealing with all three possible comps with only two bans.  So kudos to R0NIN there.  We talked about using one of our shield comps.  After some discussion, our captain Bob Shaftoes made the final call that he wanted to push forward with a surprise armor-based neut/control comp instead.  It was a gamble.  It went bad.  That happens during tournament.


One other thing: it was rather painful to me to realize in retrospect that in the same way our match with Verge yesterday was a mirror of our match with Verge last year, our match today was a mirror of our match last year with Pandemic Legion.  On one side: neut/control battleships supported by a lot of frigate razzle-dazzle.  On the other, a couple of heavy DPS ships and a massive flock of assault frigs.  The match went the same way.  Sigh.  All in all, nice job, R0NIN!  Good luck against Exodus!  That's gonna be a great set of matches.

I'll have more to say about this match post-tournament.

A few quick things about the rest of the day.

CCP Fozzie tells me "the woman in the waffle dance video is the comedian and Youtube personality Grace Helbig, who is also known in the EVE community for getting CSM endorsement requests and reacting amazingly."  Aheh.  Thanks, Fozzie!

The meta news of the day (after CCP Soundwave's f-bomb yesterday) was my alliance-mate Apathetic Brent throwing down what could be regarded -- with the broadest possible interpretation -- as a slur.  In technical terms, this is called a "mistake".  As I've said before when this sort of thing has happened to other people, if you're put in front of the EVE player base in a public manner for long enough, sooner or later you're going to screw up.  Brent screwed up, he realizes that he screwed up and has apologized, and I consider it a funny story but one that's now over.  The response in the twitch.tv chat stream was quite amusing, though...

Latest member of the Bad Tournament Logistics Hall of Fame is Exiled Ones member Dexx's Shade, who continuously repped a Kestrel but let a Bhaalgorn die.  To be fair though, this is only an auxiliary membership for now because that Bhaalgorn was doomed no matter what happened.  During the same match Exiled Ones member Jakub Trokowski warped his Bhaalgorn to 0, then charged into the opposing team.  You can imagine how well that ended.  Didn't hear if there was an explanation for it...

Finally, I would be remiss if I didn't mention triple Malice used by Hydra Reloaded and triple Utu brought by Pandemic Legion.  Great fun, and both comps won handily.  That said, one of the Utus died in a lovely small bit of tourney flying by The Initiative: a moment after getting a successful tackle on one of the Utus, The Initiative instantly put every damp they had on PL's Oneiros giving them the few seconds they needed to ensure the tourney prize ship's death.

However, in both cases the rich fellows on one side dangled shiny kill-mails in front of their opponents.  Given the same choice last year by PL last year, Rote Kapelle kept our eyes on the prize.  The Initiative and particularly DarkSide fell straight into the trap, trying for shiny kill-mails and were put into the loser's bracket by their greed.  Remember your mission...
Posted by Jester at 7:06 PM