This one, honestly, came down to comps.  You can predict how a lot of tourney matches are going to go before the first shot is fired, and CCP Rise and CCP Dolan did a good job of that in this match.  We brought an enormous number of energy neutralizers, and The Fourth District brought a lot of ships heavily dependent on capacitor to fire their guns and to use their mobility.  I love the Thorax, but of the most popular T1 cruisers only the Omen is a bigger cap hog. Dolan also pointed out correctly that the longer the match went, the more it would be to our advantage.  Yup.  That's the thing about a neutralizer-heavy comp: they need time to bleed the opposing team dry.  We also had a bit of fun making the enemy logistics pilot's life hell by spreading our initial damage across a lot of ships which puts a lot of pressure on the Oneiros cap without having to use a single neutralizer on him directly.  And again, once all but one of the opposing team were dead, we stopped for about a minute to loot.  Enemy loot comprises a measurable percentage of our tourney budget.  ;-)

Anyway, The Fourth District flew well, I thought.  We just had the "hard counter" to their comp and we used it.  Good luck in the Elimination bracket!

In addition to the full bracket that I posted on Friday, if you want a simplified bracket that just shows who's going to fight whom, this one's fun.  The site can also do this if you click on the matches on that bracket.  Our next matches are 1945 Saturday, and then either 1845 or 2000 Sunday depending on if we win or lose.  Given that I had to get up at 5:30am this morning to make our match today, that makes Jester very happy.  Our next one is a bit of a grudge match for us.  We're fighting Verge of Collapse, who knocked us out of AT10 last year and then went on to win.  In a real way, this is the match we need to win to prove that we deserve to get to finals weekend ourselves.

Onward.  All three commentators had moments that I thought were funny today. 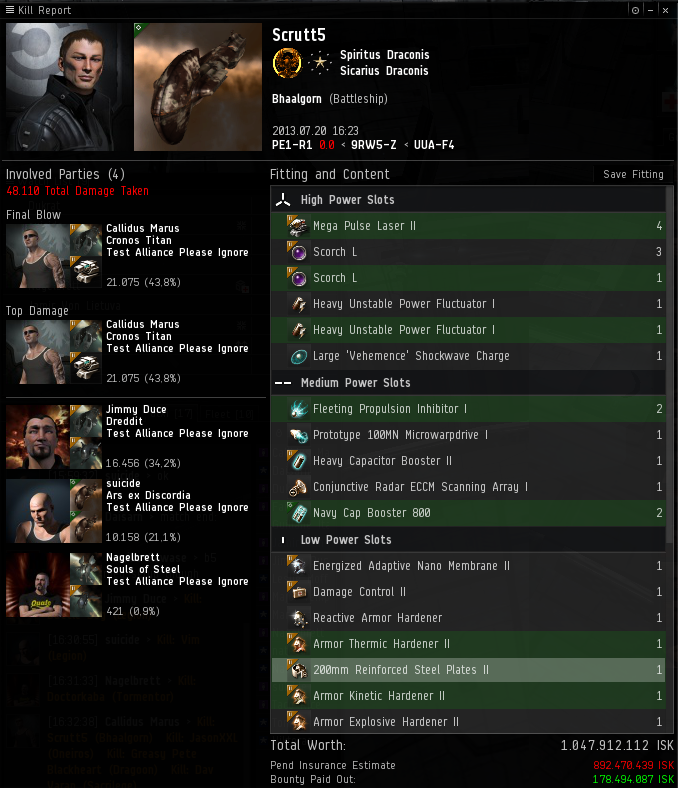 Yesterday, the Sicarius Draconis Bhaalgorn lost to TEST Alliance made the news for fitting a 200mm plate to a battleship.  Whoops!  I got some mileage out of joking that if you squint it was really a special faction warfare only 2000mm plate.  Anyway, the Sicarius guys had a sense of humor about it.  The pilot of the Bhaal today flew the team's Vindicator flagship, which was named "200mm plate <3" (they won).  Hee, nice.  Thanks to CCP Fozzie for sharing that story as well as having a funny moment when he pointed out that hosts of the Declarations of War podcast are cursed in tournaments.  Ali Aras's team was knocked out today, as was Alekseyev Karrde's Noir team.

Goonswarm, Dead Terrorists, and a dozen other teams are also out.  Right before the Goonswarm match (versus Outbreak), CCP Rise joked "Next match is Goonswarm versus Outbreak... and I look forward to seeing Goonswarm in next year's tournament."  Heh.  Yup.

CCP Dolan had good moments and bad moments.  32 matches per day is a lot and I joked on the CCP-CSM channel that I figured by day two the stress would start to take its toll.  That proved accurate when during one tense match Dolan stood up and left Rise talking to his armpit.  Heh, whoops.  But Dolan also had a lot of funny moments, one in particular during the Pandemic Legion match.  PL had entirely pulled their damage from their Dominix comp to put out another set of drones resulting in a lull in the fight.  Dolan joked "Do they think EVE Online is a turn-based game of some sort?"  And Dolan's commentary was generally quite good!  He continues to get better every time he commentates. 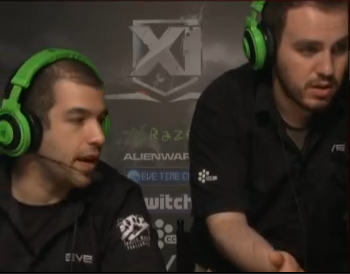 Speaking of Domis, Domi comps continued to be hugely popular all day.  The reason behind this is the extreme versatility of the Dominix hull combined with the facts of life of the tournament setting.  Tournament fights take place in a sphere 125km in radius where warp drive cannot be used.  In RPG terms, it's a bit like fighting in a ten meter square room: the quarters are extremely close and this style of arena favors close range brawling comps.  Other than Tengus, skirmish comps -- particularly those that operate at more than 75km ranges -- just don't work in the tournament setting.  It's a bit like bringing a longbow into that ten meter room.  Within that kind of radius, though, Domis can use both their amazing versatility and their huge drone bays to dominate the arena.  At close ranges, they can use Gardes and heavy drones.  At longer ranges, they can use Curators and a huge lock range to shoot at targets anywhere in the arena.  For that reason, expect to see Dominixes be the most banned ship of the tournament when bans start to be allowed next week.  Domis were so prevalent that they had their own thread on Failheap Challenge called "Dominix Team vs Anything else".

Finally, there were some matches last year that were decided by bad logistics flying.  The logistics role in the tournament is so important.  You can't just turn it over to anyone.  It's got to be someone who is both versed in flying logi and is used to the tournament format and practices just that style of flying to the exclusion of everything else.  A good logi pilot is like gold.  A bad one can and will lose you a match.  A lot of that happened today but two less than stellar logi pilots stood out today.  EVE player Woei1988 (from Drunk 'n' Disorderly), when fighting PL, didn't pre-lock his team's frigates against a Domi team and let obvious primaries get volleyed one by one.  Maybe it wouldn't have made any difference but it was depressing to see him start to repair targets too late one after the next after the next.  Get some practice in that, mate.  DnD was pushed to the Elimination bracket.

Even worse was EVE player Jokelerie on the D3vil's Childr3n team, whose Scimitar apparently had combat drones of some sort loaded, which isn't terrible.  What is terrible is that you're so busy putting them on an enemy target that you:
Yeah, both of those really happened.  There was some commentary during the match that he was trying to awox his own team.  A logi pilot's job is to logi.  Everything else should be taking a far back seat.  D3vil's Childr3n is out of the tourney.

There's one more AT-related story that happened this weekend that I want to touch on briefly, but I think I'll give it a separate post.