Yesterday was an EVE Online-free day for me, the first one that I can recall in a good long while.(1)  As a result, I missed all of the excitement in Z9PP-H.  Poetic Stanziel does a great job covering the basic facts and the aftermath.  EVE News 24 syndicated that piece, and added the really amusing video below and some brief commentary.  TMC has no fewer than four articles about it, of which I think this little opinion piece is the most interesting.  And finally CCP Falcon explains what happened from a straight factual perspective.  But I thought it'd be fun to summarize the facts, then meditate on them a bit.


Semi-short version?  "Asakai 2.0" broke out in Z9PP-H, an unintended and quickly escalating battle between TEST and Goon capital ships that committed more than 2200 players to a single unreinforced system.  Meanwhile, the fight was also being streamed on twitch.tv, with something near 5000 people watching the mayhem.  Normally this kind of fight would be given its own reinforced node.  But neither side intended in advance for the battle to get this big.  The miracle of 10% time dilation, though, means that once a major engagement starts, more and more reinforcements can be brought into a fight without the fight itself advancing too much.  In the 20 minutes that it takes to get a cyno ship or a gang into a system from 15 jumps away, only two minutes will have passed in the system itself.

Therefore, this kind of escalating fight lends itself well to even more escalation since you don't have to miss the fight and the action will still be going on when you get in there.  But it's not something that can be predicted and it doesn't lend itself well to the "fleet fight notification" form that CCP has for reinforcing nodes under these conditions.  The easy solution would be to simply put every system on the Fountain border on its own node, but I get the impression CCP doesn't have near the server hardware to do this.  Instead, each node hosts a number of systems, only sometimes systems that are associated with each other "geographically."

Caught by surprise -- and probably at least slightly motivated by the large number of twitch.tv viewers -- CCP decided to remap every system on the node Z9PP-H was using, except Z9PP-H.  That would give the system its own node and relieve some of the pressure.  Only due to a miscommunication or maybe a typo (or maybe both), every system on that node was remapped, including Z9PP-H.  When that happens, the players involved are logged off the server and have to be relogged in... without the aggression timer that normally occurs when you log out of the game while in combat.

Z9PP-H was remapped first and quickly brought back on-line.  Only the side that was losing -- TEST in this case -- simply ordered their pilots not to log back in.  At the time, TEST was facing the destruction of some 100-odd carriers in the system and the Goons had a strong upper hand.  The remap allowed TEST to make the strategic decision to use :ccp: to safely extract their assets from this situation.  Without their normal PvP timers, there was little motivation for them to come back in.  As you might expect, the Goons are not pleased.  An overwhelming victory in that battle might very well have put TEST on the run, at least for a while.  And the twitch.tv stream of course stopped dead in its tracks, which was kind of embarrassing for CCP. 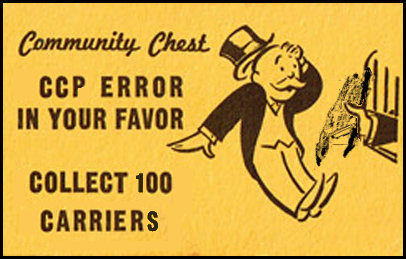 Separate from the Skype channels that we use to talk to CCP, CSM8 has a private Skype channel that we use for informal internal discussion.  A week or so back, after another 10% Tidi fight, that channel erupted into a kind of one-off discussion: has EVE outgrown its architecture?  After all, the original game was never intended to support thousands of people in a single system, and hundreds of people in a single fight.  And yet, that's happening routinely in Fountain right now and every time it does, strange things are happening.  I've started joking that when a thousand Goons flap their wings in Fountain, you get 10% Tidi in Syndicate, but that's not really a joke.  It does happen.

EVE is now ten years old.  But the comical mental image that I can't shake is a short fat 10-year-old kid trying to fit into the hand-me-down clothes of a tall skinny 15-year-old brother.  And the clothes just... don't... fit.  Seams are pulling and zippers are breaking and buttons are straining all over the place... and every once in a while a button pops explosively free and hits someone in the eye.  But these are the colossal fights that are EVE's differentiating fact in the MMO market and so are what CCP uses to market the game much of the time.

I hear all kinds of rumors about EVE's architecture (usually reinforced by a couple of leaks of EVE's server source code over the years) that makes me wonder: what would EVE 2.0 look like?  CCP is always quick to say that they don't need an EVE 2.0 because they can "refit the ship at full speed", as it were.  But wouldn't it be kind of amazing for CCP to take :18months:, rebuild EVE's underlying architecture, and then overlay on top of it all of the game mechanics, art, and graphical effects we've come to know and love?  I doubt it'll ever happen.  But it's fun to think about.

In between dodging flying buttons.


(1) This wasn't entirely voluntary.  I had both a work issue and a personal issue come up... resolved now, though!
Posted by Jester at 3:49 PM