Kill of the Week: Utu!

I want to again send my congrats to The Initiative for this moral victory and the bit of flying that ensured its doom.  During the match, Initiative pilots were trying to maintain tackle on an Utu.  fmercury's was the second one caught; the first one slipped the net.  At the moment this Utu was caught, Initiative performed what is typically called a "damp dump".  This involves putting every Sensor Dampener available on the team on the opposing team's logistics ship.  Suddenly, that ship's lock range is immediately and drastically reduced, right at the moment the surprisingly fast Utu (the others were going up to 3450m/s) tries to break away from everyone, including his own logi.  In this moment, Initiative pilots applied the DPS needed to crack this little frig.  Nice job!

Honorable mentions?  Everyone gets scanned.  Everyone.  And this Tengu gank is also fun thanks to the "maximum bling" factor.  No T2 mods, only T2 rigs, on a T3 ship.  Loot fairy said "no" to the most expensive module, though...

Lots of people sent me this Ark loss, which makes me wince every time I look at it.  In this case, the pilot in question jumped his JF to a cyno generator (mistake #1) positioned next to a POS with no guns (mistake #2) without bothering to send so much as a frigate through first to see if there was anyone in system (mistake #3).  Needless to say, there was, a Rapier which snagged the prize that either couldn't or didn't simply jump out to another cyno during the Rapier's decloak or lock delay (mistake #4).  Then the big dog came in and ended the ship, which was apparently full of every single thing this player has ever owned in EVE (mistake #5).  That wasn't the only bit of ROGUE bad luck this week, either.

And whomever that JF pilot was, apparently he didn't bother to warn his alliance-mates that the cyno generator in question wasn't safe...

Finally, it isn't exactly a kill, but it's worth noting and mourning.  An old friend of mine in the incursion community sent me a link to this... 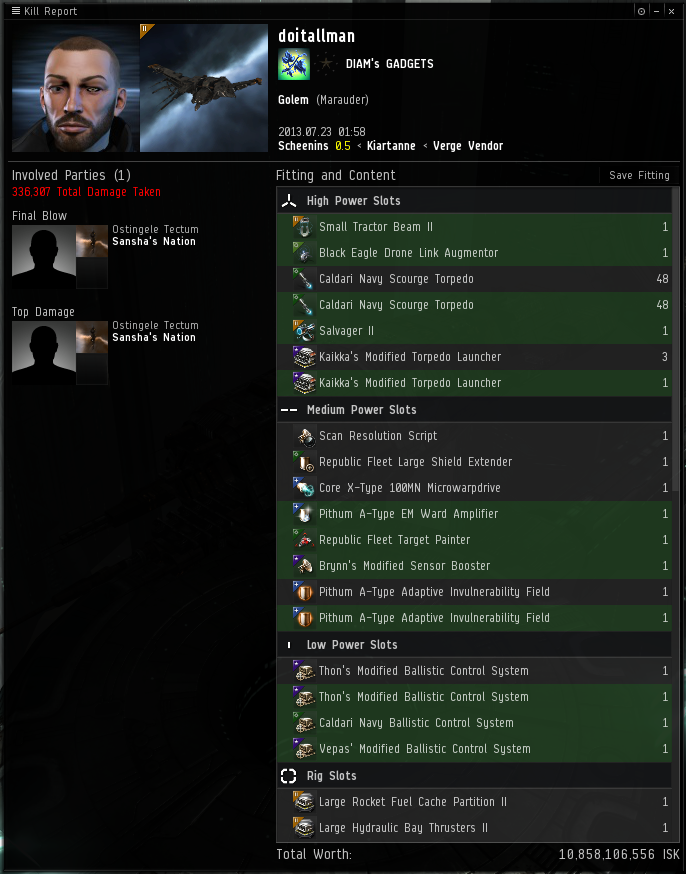 As I understand it, that's a Golem that's been slowly getting blinged out, piece by piece, for months.  I've flown with the pilot before and he's a really easy-going guy, fun to fly with and chat with.  The story on this one is pretty straight-forward.  The True Creations Research Center continues to be the hardest incursion site there is.  As I said more than a year ago, there's potentially enough alpha in them to volley player ships right off the field regardless of the number of logi brought in.  This is combined with a nasty Sansha neuting battleship that will shut your hardeners right down for you.  That's apparently what happened here and the logi just couldn't keep up.  Ouch!  Anyone want to say incursions are risk-free?

Three supers to talk about this week, none of them particularly remarkable.  First to die was this ROGUE Nyx, lost during a POS defense op.  The POS in question had two Capital Ship Assembly Arrays fitted, and the attack itself was apparently a violation of a non-invasion pact that Northern Coalition had with ROGUE.  Betrayals?  In my EVE?  Shocking.

Next to die, one Amarr faction warfare Aeon, lost to an insultingly small Ninja Unicorns/Shadow Cartel trap.  ;-)  Andrejs L takes credit for the kill and reports that this one happened in the following way:


Long story short, I fleeted him and gang warped him out.

If you don't intend to use your super-capital ship -- imminently -- then there's no reason for it to be in a fleet with anyone.  This is something that is drilled into new super pilots not long after they receive their first super.  When the op begins, you'll be ordered to get into fleet at the proper time.  Don't do it until then.  When the op is over, you get out of the fleet, not waiting for permission or orders to do so.  And you certainly don't accept random or unexpected fleet requests...

Finally, Rote wasn't the only ones to inflict a little bit of bad luck on Verge of Collapse on Saturday.  There was also this Verge Nyx, lost to Pandemic Legion in low-sec.  I didn't think that wormhole guys needed supers, but what do I know.  ;-)  This one was travel fit due to an intended sale.  The kill itself comes with both story and a video.  That Nyx looks so tiny next to all those titans...  The story:


This one's simple: The target was one we'd been aware of for some time. A friend told us a VoC Nyx was being sold on the forums, which meant it had to be one of two. On running locators, one was romping around nullsec, the other was in Derelik – thus matching the sale thread, and our home region.

We convo'd the alt used to make the forum post and made an offer, which was accepted. He then told us the location of the ship (which we already knew ofcourse). After hours of attempting to find a third party (didn't matter, we just needed him to log in), we gave up. We then offered to just send him the isk, provided we could see the ship first, and then he'd eject from it and leave. He agreed and logged in, with 5 ex-PHEW now Pandemic Legion probing alts ready to nail his spot.

Sure enough, we got him, bridged – tackled and engaged. He lasted less than a minute – even with TiDi from the 4000 man fight taking place on our node.

And we already have our next target.

I look forward to seeing it!

And as I mentioned, the Li3 Avatar that went down did so about 3.5 hours after deadline, so that one will be covered next week.
Posted by Jester at 5:43 AM