More than one MFer had a mouth

By now, you've probably read the story or heard about what happened.  And if you haven't, there are versions on both EVE News 24 and TMC.  As always, I'll start with a short version of events but I really kinda want to talk about the bigger picture, too.

On Sunday night, BandWidthh, a six-month member of Habitual Euthanasia (one of Pandemic Legion's most celebrated corps) declared on comms that he was aware of two carriers repping an off-line POS.  He spun up his own super-carrier and asked for additional supers to get into fleet to help him destroy these two hapless victims.  13 PL players joined him, one of them in one of the game's three Revenant super-carriers.  BandWidthh had a mid-point cyno set up and jumped the supers to this mid-point, then once the fleet was capped up, informed them that the carriers were tackled and they were clear to jump through.

They jumped through to an off-line POS, all right.  But there were a few dozen Black Legion supers, 50-odd Black Legion dreadnoughts, and a large support fleet waiting for them.  Due to a minor mistake and three of the supers bumping off the off-lined POS, these three supers were able to successfully get away.  The remaining ten supers, including the Revenant, were destroyed.  In short, BandWidthh inflicted an awox on Pandemic Legion worth some 700 billion ISK.  The Revenant hull alone had been sold to the pilot for 290 billion. 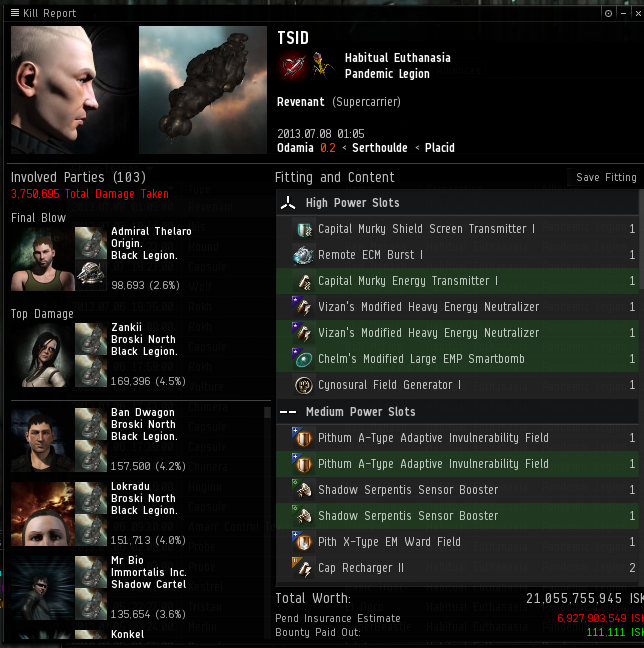 BandWidthh claims not to have joined PL with this intent in mind.  In fact, for all intents and purposes, he claims to have been goaded into the action through peer pressure.

The PL derp is making Pandemic Legion famous across the Internet.  The Forbes video game writer covered it, as did this gaming website.  So, you know, word's getting around.  This is going to be one of those stories that causes people to start playing the game.  Somewhere out there is a frail young EVE newbie reading one of these articles and dreaming of the day that he too can lure a 300 billion ISK ship to an untimely and amusing death.

Nearly as amusing as the awox itself is the reaction afterward, which is captured on a pair of Soundclouds (here and here).  The... ummm... angry person is Grath Telkin.  The much more relaxed voice belongs to JEFFRAIDER.  Both are long time Pandemic Legion members and respected for their respective skills within the alliance.  If you've ever come up against Pandemic Legion and came out on the losing side, I do recommend taking 20 minutes or so out of your day and listening to the recording.  It is some of the most beautiful rage in the history of EVE Online.  It will not be long until it is parodied and satirized across Youtube, if it hasn't happened already.  It's certainly started generating some amusing pictures, this one and this one being good examples.  The latter is a reference to the Grath screaming on Teamspeak that "WE HAVE!  TWELVE!  BLACK LEGION SPIES!"

Anyway, if you've got a hate on for PL, it will do your heart good to know that PL tears far exceed the value of any other New Eden tears.  Matter of fact, there are not a few people joking that PL should be farmed for this quality of tears on a weekly basis to improve the game.  ;-)


But it's also interesting to consider what it all means.

I myself have had three particularly memorable run-ins with Pandemic Legion, one every year or so for the last three years.  In 2010, Pandemic Legion was instrumental in kicking Gentlemen's Club out of Scalding Pass.  I was in a number of fleet engagements with them during that time, and we won very few of those.  In 2011, Pandemic Legion made a concerted effort to conquer a number of technetium moons in the Pure Blind and surrounding regions and were repulsed by a small group of Pure Blind-based alliances, of which LAWN was one.  I was part of the LAWN fleet for a number of fights (I blogged about them at the time), and we were successful in driving PL off.  And last year, Rote Kapelle defeated Pandemic Legion in a "must win or die" Alliance Tournament match.  I include this one with the other two because our AT team spent a week agonizing how we were going to approach that match and to me that week and the culminating fight at the end of it was every bit as memorable as the other two events that lasted much longer.  And of course, I've had other more minor less memorable run-ins with PL over the years, too.

In any PvP alliance, you have a percentage of professional pilots, those who really think about how they fly and how they fit their ships... and you have a percentage of F1-pushers who do what they're told.  For much of its history, PL has been remarkable for the high percentage of the former within their alliance.  Hell, for a lot of their history, they haven't been a "legion" at all.  A classic Roman legion was 4500 men and PL was rather remarkable for how relatively small they were compared to what they could get done and who they could threaten.  When I encountered them in 2010, they had about a thousand pilots, far fewer than Gentlemen's Club at the time.  In 2011, they had 1500.  And the vast majority of them were pretty scary individuals.

Strictly speaking from the outsider's perspective, that's changed in the last year or so.  It seems like the number of F1-pushers in PL is going up.  I am certainly not qualified to say how this has happened, and hell, it might not even be true.  As I said, I'm speaking from the outsider's perspective.  I met a lot of PL pilots at Fanfest and they were great people.  Many of them know more about EVE Online than I will ever know.  But taken collectively as a group, they're not quite as scary as they once were.  A professional pilot doesn't fit a Moros like this, for instance...

This comes up again and again in Grath's rant.  He talks about a full 40 seconds of silence when the trap was sprung on PL where no or few targets were called and there was little or no conversation at all, an absolute eternity in PvP time.  Grath screams that someone should have been calling targets or at least directing the escape attempt, though the wording he uses is quite a bit more profane and insulting than that... it's the source of this blog post's title, in fact.  ;-)  He screams that the pilots involved didn't think about what they were doing.  At another point, he screams that there's a disease destroying the alliance.  "You weren't set up!  You were stupid!" he practically shrieks at yet another point.

Pandemic Legion is approaching legion-sized lately, now having well over 2000 members.  It would not surprise me at all if we saw a pretty dramatic internal purge happen within the alliance at some point soon.  While JEFF might be very casual about it, I can't imagine being a figure of fun to a large block of EVE players appeals to some of PL's leadership.  PL is used to inflicting this kind of "user story" on EVE players, not being the subject of it themselves.  Maybe the more relaxed people like JEFF will put the brakes on the situation?

In any case, it'll be interesting to see the reaction.  After all, there's more than one MFer in PL that has a mouth...
Posted by Jester at 5:55 AM