So, I'm still really busy with Alliance Tournament practice.  First match, 11 days away!  But there's some funny things going on behind the scenes that I thought I'd cover briefly.

First one just made me laugh: 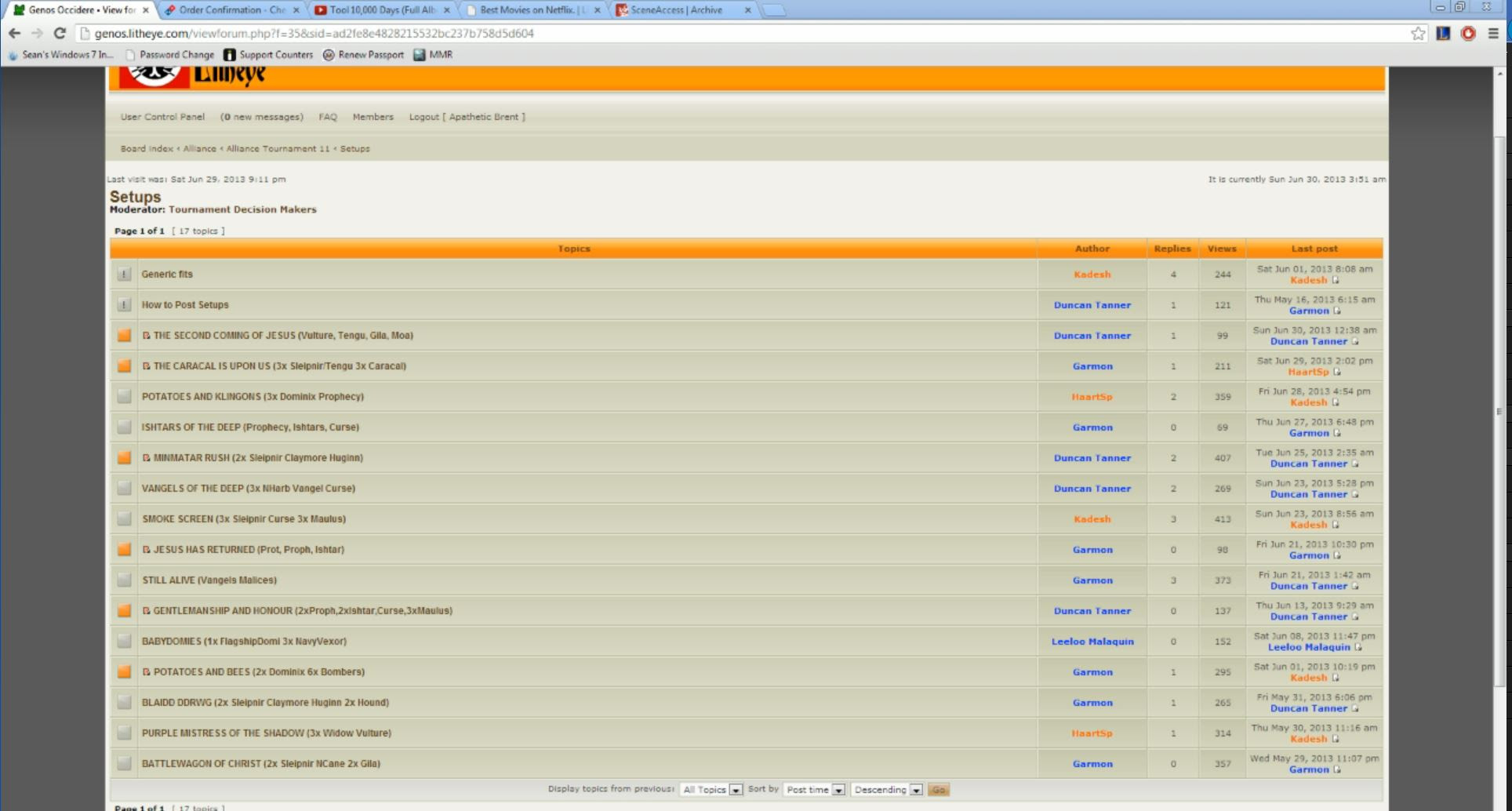 In addition to being one of the two AT commentators this year, Apathetic Brent is also a fairly prominent PvP streamer.  One of the things that's really helpful for tourney commentators is to practice with advanced teams.  That gives you a better understanding of the comps that are likely to be popular and how they fare against various types of competition.  That, in turn, makes you a better commentator since you can talk intelligently about what you learned during the practices.  With this in mind, Brent has been practicing with the Hydra Reloaded team, one of the odds-on AT11 favorites.  That means that he's had access to their tourney comps.

So, here's Brent doing his PvP stream, displaying what he's doing to the world.  Then he brings up his browser for only a couple of seconds.  But that browser happened be showing the Hydra tourney comps!  Brent minimizes it quickly...

...but that didn't stop someone from getting a screen-cap of the browser image and then making it -- and all the comps -- public.  Whoops!

Needless to say, Garmon isn't pleased with Brent right now...  Anyway, if you're curious why every other tourney commentator and CCP dev is going to be trolling Brent hard in a couple of weeks (and for the rest of his life), now you know.  And knowing is half the battle.

One interesting thing about this?  Those comps are some pretty nice ones, and are going to go a long way toward leveling the playing field a little bit, particularly with alliances that have good pilots but maybe poor theory-crafters.  It also gives every team an interesting slate of "opposing force" comps to try their own favorite comps against.  Overall, even though this is a derp of pretty massive proportions, it's actually going to serve to make the overall tournament better and more interesting.

See the Vangel/Malice mention in that screenshot?  Second thing to watch for in Alliance Tournament 11?  Past tournament ships.  Lots of past tournament ships!  Expect to see Malices, Vangels, Cambions, and -- above all -- Etanas flown.  The Etana is one of the AT10 tourney prize ships, a super-charged Basilisk with a rep range bonus and more cap than the Energizer bunny on crack.  This ship can fit six large shield reppers and easily run them all and still remain cap stable.  Overheat every other repper, and it can keep that up for almost four minutes.  It's insanely good.  And we're going to see them flown.  And with any luck at all, we're also going to see them blown up.

Hell, several tournament teams may be presented the choice of either winning their match or blowing up a 40 billion ISK frigate or cruiser.  How teams decide when faced with these choices is probably going to influence the outcome of the AT.  For the rest of us, we get to see some really expensive ships in space.  Last year, there was only one match where AT prize ships were used, and they weren't a significant factor and they sadly weren't blown up.

So that will also make the tournament a lot of fun to watch!  I myself hope to get myself another multi-billion ISK kill-mail.  ;-)

Third thing: CCP Bro announced today that 13-charge ASBs will not be allowed in tournament play.  You'll recall that I wrote a post about this topic last week.  Frankly, I feel like this is the right decision.  One of the things I really like about the Syndicate Competitive League is that -- as much as is possible -- ISK is taken out of the equation for matches.  Obviously for AT, tourney prize ships have a huge impact on this.  But adding 13-charge ASB ships would just add fuel to the fire.  In addition, as I covered in last week's article, 13-charge ASBs just make tournament matches more boring.  I'm not in favor of that.  ;-)

So all in all, all three of these amusing little things will serve to make the tournament more worth watching.  Can't wait!
Posted by Jester at 10:11 PM