So that ends our AT11 run.  We were a top 12 team this year, as compared to a top 16 team last year, so it's an improvement but not as much of one as we were hoping for.  I haven't watched the twitch video replay but I'd be surprised if the commentators weren't going a little nuts because at first blush it probably looked like eight minutes of an incredibly even match.  We even pulled ahead by four points at one point.  And at the end of the day that's the kind of fights that Rote Kapelle likes: closely-fought brawls.  You're probably not going to ever see us run a tinker kind of comp because we find that kind of fight boring.

So yeah, it was fun but the close match was kind of an illusion because we caught a couple of bad breaks.

Click the link above and select the "3D Match Viewer" and it unfortunately shows a really nifty trick that AGONY pulled on us during that minute.  At 30 seconds into the match, zoom in on our captain Bob Shaftoes and you'll find he gets webbed and scrammed by an Enyo piloted by Gizznitt Malikite with a second Enyo holding nearby as backup.  Bob is pinned down about 20km from the beacon.  Meanwhile, the other Enyo and two Incursi dive for RuriHoshino in our Basilisk and they likewise scram and web him at about 65km from the beacon.  Fortunately, the AGONY team didn't bring damps -- had they done so, Bob probably would have collapsed right there -- but what they did bring were unbonused jams in the two Tristans.  Soon after Bob and Ruri were tackled, Ruri got jammed for a critical 20 seconds.  Bob went down shortly thereafter.

From that moment forward we were trying to stop the bleeding.  I'd say it's a testament to our pilots and our practice how long we were able to hold out after that.  Mat Westhorpe seems to enjoy screenshots of me dying because he captured another nice one.  gf, AGONY! 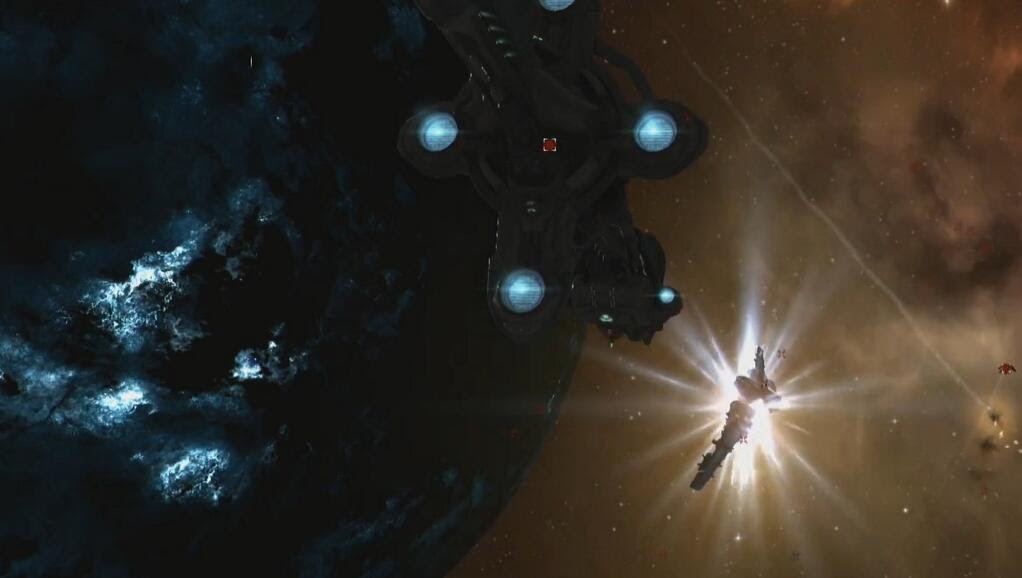 Weirdly though, the "unpredictable" AGONY team -- who were in the loser's bracket only because they brought this comp against Pandemic Legion and lost with it decided to be unpredictable by bringing the exact same comp to their second match with Pandemic Legion... with about the same results.  So AGONY was also knocked out today.(1)

The highlight of the day was of course the hugely expensive victory HYDRA RELOADED inflicted on themselves against Pandemic Legion.  The phrase "Pyrrhic victory" was invented for situations like this.  HYDRA won, but they lost something like a hundred forty billion ISK doing it depending on the value you place on the Etana prize ship logistics cruiser and the hugely over-powered Cambion assault frigate.  They lost their flagship Dominix in the same match but that was much less crippling.  Word around the campfire is that it was chosen before they discovered that there are apparently no officer drone damage mods to be found anywhere in New Eden...

Over at the AT11 stats page, the "win" was expressed with this really amusing bar graph.  Blue are ships destroyed.  Red are ships lost.  Look where the #1 team in Alliance Tournament 11 is.  Compare and contrast to where Rote is, who came in 11th or 12th.  Hee!

Given that these were the first ship losses HYDRA suffered in AT11, I joked:


Give this to HYDRA. Once they finally lost a ship in #atxi, they *didn't* mess around. #etana #cambion #tweetfleet

According to HYDRA, they have replacements for both lost ships.  I choose to believe them.  We'll see that comp again tomorrow.  Verge of Collapse also lost an Etana in their own match against DarkSide (which they lost).  After that, this amusing snippet made its way around:

All in all, a lot of really great matches today!  All the matches that I thought would be squeakers definitely were.  Overall, I think CCP has reason to be very pleased.  I think this was the best single day of Alliance Tournament since I started watching them.  Everyone gave the audience a great show.

Next up: a couple more wrap-up items on today, then a preview of tomorrow.


(1) Commentator fumble today: none of them seemed to have noticed that AGONY was in the loser's bracket because they had previously lost only to Pandemic Legion.
Posted by Jester at 5:45 PM