Vacation time is wrapping up in Reyk!

We're starting to see a lot more activity from CCP as people trickle in from their vacations.  Things are also starting to heat back up on the forums and such.  By now, you know that Odyssey 1.1 is going to be released very soon but I don't believe the code is locked yet.  That makes for a lot of very busy devs at CCP as they wrap up this between-releases-release.

Other than the ship re-balancing stuff (which I'm always a fan of), I think my favorite mini-feature this release are the new jump clone skills.  Unfortunately, I am not very happy with the 19 hour limit on the new skill Infomorph Synchronizing.  I personally think it is the worst of all possible solutions: a new skill that only provides a very minor benefit for vets with too many other skill trained so they can have yet another advantage over newer players.  I argued long and strenuously for a more compelling skill with a larger benefit for training it.  In particular, days of training to pick up that last Level V one hour bonus?  Ugh.  No, make that ugh.

Still, it's a step in the right direction if only a small one, and I can continue to bitch about it in the coming months to see if I can make the skill more worthwhile.  It was NOT lost on me that a skill like this was one of the most requested Reasonable Things suggested by players, and lots of you had lots of great ideas for alternatives to make this skill better.  Trust me, I've been pushing them.  In a more clear win, I also pushed for the new Advanced Infomorph Psychology skill.  This is one that I've really wanted since I mentioned it would be something I'd push back in February.  Op freakin' success there.  Thank you again to the several of you that also suggested that one on the Reasonable Things list.(1)  Next up, the rest of that February list, to say nothing of the rest of the Reasonable Things list.  ;-)

With all of the features that the CSM has been briefed on for Odyssey 1.1 now public, CCP has now turned their attention to starting to fill us in on preliminary ideas for the next expansion.  But of course there will be lots more ground covered for that at the summit, which is now... yeesh... two weeks away.  Time's going fast!

CSM8's second Town Hall is also coming up this Saturday August 17 at 1900 EVE time.  As I mentioned last week, you can find all the information that you need to attend at the EVE-O forums announcement thread.  In the meantime, Xander Phoena continues his monthly CSM8 interviews.  This month, the victims were Mike Azariah and Trebor Daehdoow, who had lots of interesting ground to cover.  Xander continues to be one of the best interviewers around.

Knowing what I know about the CSM's history, it's been kind of painful for me to watch the CPM's growing pains.  They're currently going through some of the very same communications issues with CCP that dominated the terms of CSMs 2, 3, and 4.  Rather than suffer in silence, though, they've published a lengthy open letter airing their grievances and giving a long list of suggestions on how CCP can better take advantage of the resource they have in the CPM.  Whether it will work is anyone's guess.  It's going to have a lot to do with how the restructuring of the DUST 514 team goes and how they feel about this letter.  We'll see...

Did I mention that we've been trolling CCP about this post from CCP Ytterbium?  We have.  Needless to say, we recall that flowchart that states "Is it a ship in EVE?  It will be rebalanced!" and had a good time reminding CCP of it.  They didn't need the reminder.  But trolling about it was fun.  ;-) 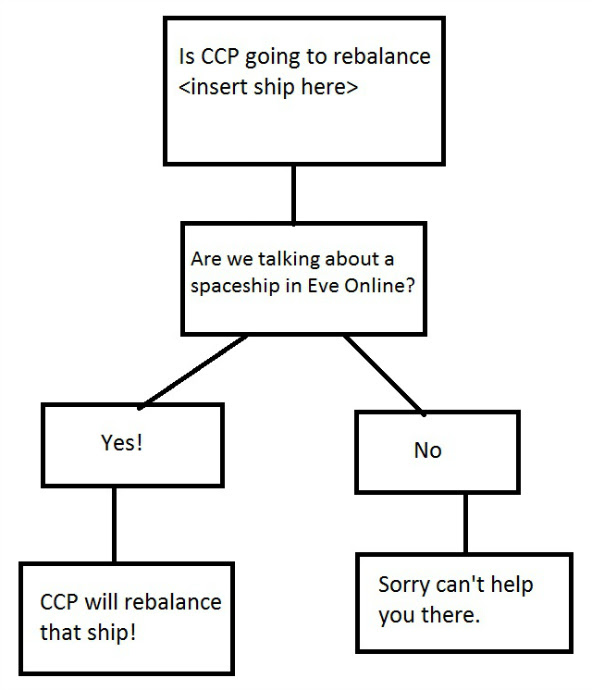 And... I think that's all for this update!  This week, we start pestering CCP Dolan to release the schedule of Summer Summit sessions (try saying that three times fast) so you guys will have something to ask us about on Saturday... hope to see you there!