Did things just get better or worse?

Awesome movie quote time.  There's an amusing scene in Die Hard 2, about half-way in.  Former soldiers become mercenaries have taken over an airport full of people and are holding planes circling overhead hostage by their control of the tower's landing equipment.  A U.S. Army special forces unit is sent in to take out the former soldiers under a Major Grant (the sublime John Amos).  The airport's Chief of Operations, Trudeau, can only think of the fact that his airport full of innocents is held captive by a large number of men with guns... and now there are even more men with guns arriving, and making it clear that the peaceful solution isn't on their minds.  Needless to say, Trudeau isn't thrilled to hear this and the protagonist of the piece, John McClane, cracks wise:


Hey Trudeau, did things just get better or worse?

McClane doesn't get an answer.

Let's talk about some of the long-term implications of the post-moon New Eden.  And I apologize in advance: this post is going to be rather long, but there's a lot of ground to cover.  It starts with the concept of scalability.

One of the boons the pre-Dominion sovereignty system had going for it is that holding sov space didn't scale well.  Scalability is a measure of how easy or hard it is to control and manage a system as it grows.  Systems that scale well are just as easy to manage as they grow.  A lawn scales well: a lawn that is twice as big takes twice as long (or twice as many people) to mow, and a lawn that is four times as big takes four times as long (or four times as many people) to mow.  A communications network scales poorly.  Networking professionals will tell you that a network with 500 end-points is more than twice as hard to manage as one with 250 end-points.  Pre-Dominion sov, based as it was on the fueling of widely scattered and hugely numerous towers, did not scale well.  It took much more than twice the effort to control twice the space since you had to manage both a logistics network and a communications network to keep all those towers fueled.

However, Dominion sov scales extremely well: all you have to do is conquer the systems and pay the bills.  Pre-Dominion sov was like a communications network.  Post-Dominion sov is like a lawn.  All it takes is more people to mow it.

Now in practice, this hasn't mattered since Dominion was released in late 2009, and the reason -- ironically enough -- was the moons themselves.  In a lot of ways, they acted as control rods for the nuclear reactor of a large sov alliance.  We refer to "the north" as a unit because that's where the tech moons tended to be clumped and for the longest time a single coalition held "the north."  That single coalition has changed over the years but the natural boundaries have not.  Alliances in that area took the valuable moons, and then humans being human and because we like clean endings and round numbers, tried to establish buffer zones at the regional borders.  Once those borders were established, the alliances behind them tended not to stray too far from home because few alliances could project power across a wide enough sphere to both launch invasions far from home and protect the moons held there.

But now those moons aren't worth as much, are they?

Alliances used to measure their budgets based on the number of moons they held but as I established yesterday, that's unlikely to be a thing for much longer.  Alliances will probably be a bit more casual about losing moons knowing full well that individual moons here and there probably aren't going to be fought over to the extent that they have been, they won't be defended quite so vigorously, and they'll therefore be easier to take back when needed.  To a large extent, EVE has lost a conflict driver... a pretty big conflict driver.

Yesterday, I touched briefly on this article at TMC which lays out the potential income differences between moons and rental agreements (hint: renting wins).  The entire article is nothing more than a sales pitch aimed squarely at the CFC membership.  But particularly striking was this graph... 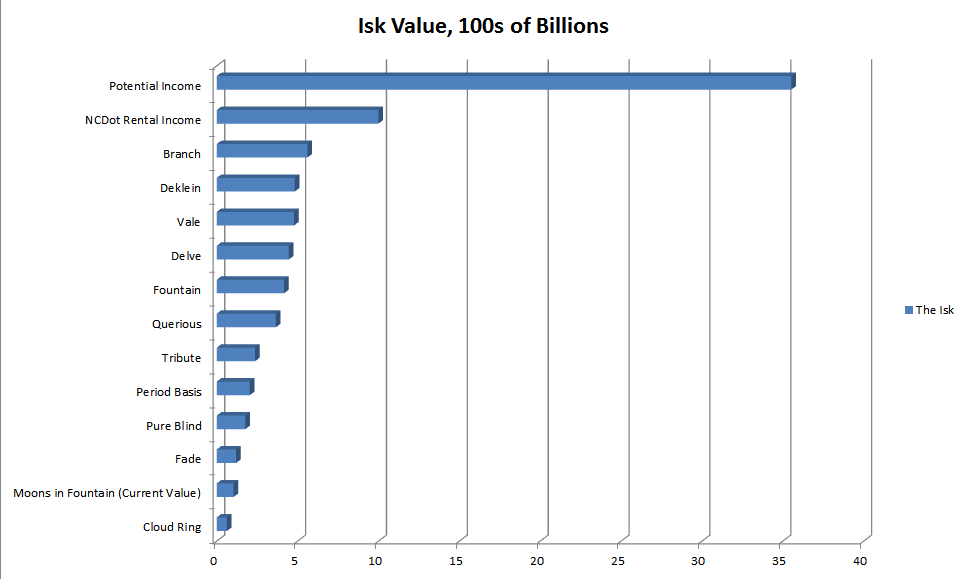 ...which puts renting into the perspective of 11(!) regions that the CFC could potentially rent out.  And to my utter lack of surprise, Delve, Querious, and Period Basis are included in the list.  One presumes that N3 isn't going to take that sort of thing lying down.  There's every reason to think that whomever is in charge of TEST right now is receiving some very interesting offers from both north and east for the peaceful transfer of sov.

But let's get back to scalability.  The northeast part of New Eden is a rather notorious rental zone almost specifically due to its lack of moons.  But the interesting thing about the much-ignored northeast is how it demonstrates how scalable rental income is.  Once your own alliances home constellations are set up, the only real limit on the number of constellations you can rent out are:
Power projection being what it is in New Eden these days, it isn't much harder to control a larger area of renters than it is a smaller one.  Sure, once the CFC puts this into practice, they're going to be inundated with visitors looking to prey on their renters.  But the CFC has always been utter masters at power projection via jump bridges and their members are used to crossing the galaxy quickly to deal with threatening situations and multiple overlapping timers.  I think the biggest issue Goons will have with a rental empire won't be holding it or conquering new territory for it, it's going to be their ability to find people willing to trust Goons with their livelihood.

That could be a very large challenge indeed.

But if they're successful, the "big blue doughnut" has a chance of becoming much more fact than fiction.  As I said, rental income scales very well and the eventual war between the CFC and N3 seems inevitable at this point.  If the CFC starts conquering new regions in the south, they could find themselves once again in control of nearly unlimited wealth... wealth that the graph above shows would dwarf their previous fortunes made on the tech throne.  And more importantly, wealth that would be even easier to maintain.

Did things just get better or worse?
Posted by Jester at 11:47 PM