Don't get too attached

With EVE now ten years old, we're starting to see a number of corps celebrate their ten year anniversaries as well.  One of those is Seleene's corp Body Count Inc.  I've never met a man so enthusiastic about his in-game corp logo.  ;-)  At Fanfest he was showing me a resin cast of it attached to his Fanfest badge and this year, he had some coins cast to celebrate the corp's ten year anniversary... 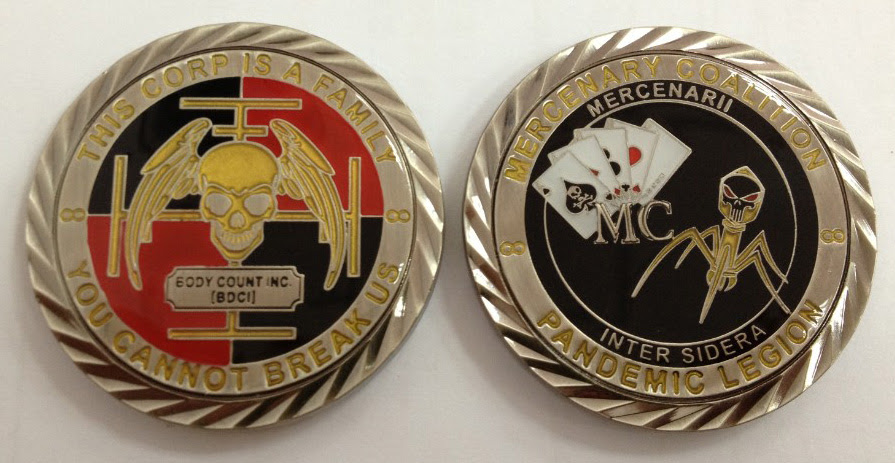 It's almost as if he thinks he owns his corp name.  Only he doesn't.  CCP owns it.  Or more specifically, CCP's GMs own it.

For the longest time, the EULA has had this to say about in-game names...

You are encouraged to use a pseudonym, but you may not choose a name that violates anyone's trademarks, publicity rights or other rights. Acceptance of a pseudonym by the System does not mean that your chosen pseudonym does not violate anyone's rights. You are responsible for any liability incurred by yourself, CCP or anyone else due to the pseudonym you choose. CCP retains the right to reject any pseudonym it determines, in its sole discretion, is unlawful, indecent, obscene or otherwise violates standards of good taste.

This is a very straight-forward policy that is supposed to keep CCP out of legal trouble and keep you from impersonating other EVE players.  This comes up from time to time: EVE players will attempt to troll other EVE players by choosing a character portrait and name that is a very close approximation of a well-known player.  The Mitani, say.  Or Elsie Randolph.  Or darknessss.

There are advantages to holding such a character name, of course: if someone intends to send ISK to the real darknesss for a super-cap transfer and types one too many "s" characters into his keyboard and you own that imitation, profit for you!  And that's one reason CCP frowns on the practice and one reason you're expected to know not to do that.

But other than the EULA and the Terms of Service, there are actually a number of EVE Policies that you are responsible for reading and knowing.  One of the lesser-known ones is the EVE Online Naming Policy, which was recently updated.  One of the more interesting parts of this policy states that you may not have a name in EVE Online that might...


Reflect, glorify or emulate any real-world group or organization, terrorist society, criminal elements, discriminating organizations or their leaders and figureheads. This includes the use of names of real-world military, political or religious groups.

It also specifies that...


Age of the account or character is insignificant. Players who have knowingly and willingly given their characters inappropriate names and successfully avoided detection of this infraction against the rules will not be rewarded for their improprieties by escaping reprimand.

...meaning, in short, that just because you create a character called The Mitani, and even if it goes undiscovered for a year, you can still lose it at any time if the real The Mittani notices and/or takes offense.  But it also means that the name of your character, corp, alliance, or the name of any other item in-game that you can name can be taken away from you if it matches "any real-world group or organization"... like Intel, say.  Or Microsoft.  Or Coca-Cola.  Or IBM.  Or Adidas.  Or Bill Gates.  Or Steve Ballmer.  Or Steve Jobs.  (All of these exist in EVE.)  Or -- and this is my favorite -- Hilmar Veigar Petursson.

If you are suddenly thinking to yourself, "Dear God, I could use this information to troll tens of thousands of EVE players and CCP's entire GM staff right into the ground... simultaneously!"... well,
But I'll get to that story as soon as I can.  I'm sure some of you are thinking of who I am thinking of.  If things go for this corp the way they have been going, they don't get to celebrate their corp's ten year anniversary... at least, not without there being a big-ass asterisk in the middle of it.  I thought it would be fun from a journalistic perspective to interview everyone involved and use a bit of my communications training to do a real hard-core news piece.  And for the past ten days or so, that's what I've been doing.  But in the days since the story broke, I've been asked by the principals involved not to go public quite yet.  It's being kicked upstairs through CCP level by level and for now I'm going to respect the process.  In the meantime, I'm continuing to follow the story.

But that doesn't mean I can't play around the edges of the story a little bit too.  As a test case, a few days ago, I submitted the names of 15 corporations or alliances in EVE Online that are directly named after real-world terrorist organizations or business interests that have been known to be involved in illegal or shady dealings.  Needless to say, this was not a hard search to perform -- there are literally hundreds of such corps and alliances in EVE just within those two limited categories.  In the interests of science, my list included both 1- and 2-man private corps as well as larger PvE and PvP organizations with dozens of members, and one very large sov-holding alliance with hundreds of members.  All of them violate CCP's naming policy above.

Which ones will be renamed?  Or will CCP reconsider this part of their naming policy?  I personally think they should.

To all of you involved in my test case, I apologize, but I assure you this was strictly done in the name of science.  Because as you can see from what's above, the potential impact to this one part of the EVE Online Naming Policy is tens of thousands of EVE players right across New Eden, all of whom are using names they're not supposed to, all of whom are supposed to lose them as soon as they are pointed out to the GMs as being in violation of their naming policies.

Don't get too attached.  And stay tuned!  More to come on this subject.
Posted by Jester at 6:34 PM