Kill of the Week: Wrecking shot

Given the number of people who pointed me at it, I suppose I would be remiss if I didn't pick this Cynabal as KOTW...
http://www.eve-kill.net/?a=kill_detail&kll_id=19123683

Yeah, that's a Rote Kapelle ratter-hunter Cynabal being murdered by one of the ratters he was hunting.  And the ratter in question was AFK.  Whoops!  Story here is pretty straight-forward, though.  The pilot involved is an extremely experienced ratter-hunter but also has been away from the game for a while.  As a result, he was not yet fully versed on some of the more interesting changes in the game lately, like Drone Damage Amplifiers, the reduced tank needs this puts on Ishtar ratting ships, and the fact that rats now aggress on threatening targets rather than staying locked on a tank.  This means that ratting ships can be thinner and can incorporate changes like Drone Navigation Computers which make Wasp heavy drones quite quick.

Now combine this with an overly aggressive, overly confident ratter-hunter who burns in super-close to his relatively motionless target to apply Hail DPS... rather than the EMP damage that would be more appropriate against a shield-tanking ship.  He also applied e-war drones to his prey, mistakenly thinking that the targets drones wouldn't go after him... then badly underestimated the amount of damage those drones would do to his... ummm... relatively motionless ship.

Then add a wrecking shot (it's three below the highlighted line): 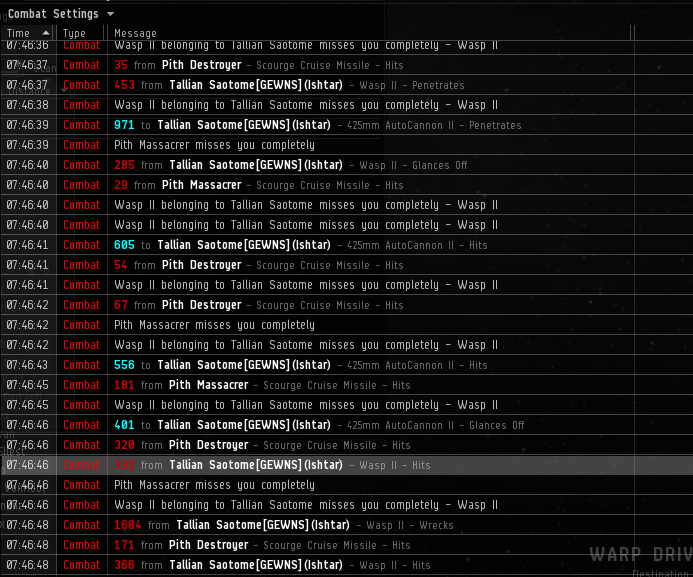 I think you'll agree that mistakes were made.  ;-)  You can see the Cynabal's DPS drop off markedly as he realizes he's in trouble toward the bottom of the log and starts burning away from the Ishtar's drones.  Too little, too late.  Needless to say, we in Rote are trolling the victim here mercilessly, particularly after he initially bitched that he was going to petition the loss...  That said, the Ishtar did die, presumably finished off by rats.

I think I'm going to limit myself to one (and a half) honorable mention this week, but it's a doozy...  That said, the story is that of a pretty straight-forward missioner gank.  I think you'll agree that an insulting small number of Tornados were needed to do the job.  Remember what I wrote last year about having at least some buffer?  Yeah, that.  Anyway, just to add insult to injury the same guy was apparently moving some loot to Jita to sell so he could buy another Abaddon when this happened.  That isn't how you fit a MWD to an Iteron V.  This sort of thing generally happens because you make a name for yourself as a high-value target, by the way...

First one up is one that should have appeared in last week's report but hadn't yet been API verified at the time I wrote it (which is somewhat unusual).  It's this Circle-Of-Two Wyvern, absolutely crushed by Black Legion and a few friends up in Venal.  From the video, it looks like this was an awox scenario.  There are two Sabres on field with the Wyvern which is at the sun but the FC orders his fleet not to shoot at them, reporting that the only hostile on field is the Wyvern.  So, presumably this guy was tricked into taking his new toy for a joyride and then ganked when he did so.  Whoops!  In other news, I don't think I've seen that many Lokis in one fleet before...

The next one is kind of fun, this Nyx.  Story on this one is that the ship got bumped out of a POS force field somehow while the pilot wasn't present, perhaps by bumping off a POS mod with the residual speed that a ship has when you eject from it.  The two killers from Black Legion and Origin, apparently had the choice of either stealing the now unpiloted Nyx or killing it.  They chose the latter.  When you eject from a ship, your character name remains associated with the ship for a period of time and if killed during this period of time, the game assigns a kill-mail.  So that's an entertaining little kill for the two guys involved.

Last is this Fidelas Constans Nyx, killed in low-sec by Shadow Cartel and friends.  This one was fairly pimped out even by super-capital standards, featuring a super long-range officer smart bombs and two VERY expensive officer cap rechargers as well as a few other officer mods.  EN24 has the story on this one, which essentially starts with a Caldari militia tackle on the super followed by the obligatory bat-phone for the DPS needed to kill it.  Other than that and a video, the story is pretty thin.

Anyway, with wars wrapping up right across New Eden over the weekend, the chances of another large scale super-cap battle drop to near-nil for a while and as a result a lot of supers will probably remain logged off or their pilots un-subbed for a while.  We'll see how long it is before I have even this many supers to write about...
Posted by Jester at 11:33 PM