OK, let's get back to what I wanted to write about this week, because I'm now once again way behind.

I last looked at Snapcount data back in April and as the Odyssey data started to come in, it was clear that I was going to have to give it some time to mature before any conclusions could be drawn.  The data was really odd you see, and... well, let's just look at the graph to start: 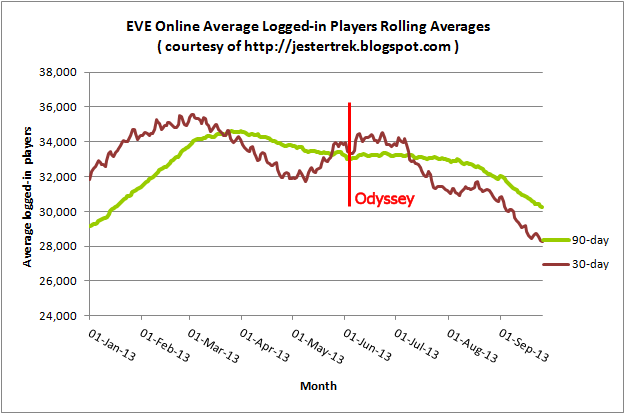 For the second time in a row, I've put the 30-day trend in front of longer term trend because I think the short term trend is more interesting.  Each little spike in the 30-day graph represents a weekend, where EVE players tend to log in in larger numbers.  This graph picks up where the April one left off, with the release of the Retribution expansion on 4 December.  At that time, I noted that we were in the midst of a historic spike of logged-in players and in danger of finally breaking out of the 30,000 logged-in player rut that EVE has been in for years now.  However even in April you could begin to see the dip in the graph as players burned out on Retribution's features and were looking forward to the next expansion, Odyssey.

This dip is typical and is nothing to worry about.  Most EVE expansions are characterized by this large spike after the release of the expansion followed by a slow fall in the number of players.  It's one of the reasons that I measure the success of EVE expansions as I do, by looking at their logged-in user count both 30 days after the release of the expansion and 60 days after its release.  Does positive word of mouth about the expansion spread, getting more players to log in (Incursion, Crucible)?  Or do players look at the expansion, say "eh" and go back to playing other games (Tyrannis, Inferno)?

Then I look at the long-term: does CCP do a good job of selling the next expansion to try to retain and build the player base?  Incursion was a good example of this one as well, but we'll get to that.

As I looked at the data, it was pretty clear that Odyssey was going to be another "eh" expansion, and once we were past 60 days, that was confirmed:

People are logging off in large numbers and there isn't even a dip associated with the release of another MMO that I can see.  There is a pretty good dip at the end of the Fountain campaign and that is arguably not CCP's fault.(1)  But overall, we've got 6000 fewer players logging into EVE on a daily basis than when Odyssey was released and that's got to hurt.  But I'm writing this post now since Rubicon was just announced and its features laid out a couple of days ago, so we can see if that starts the trend curving upward again.

In the meantime, let's look at the long-term trend: 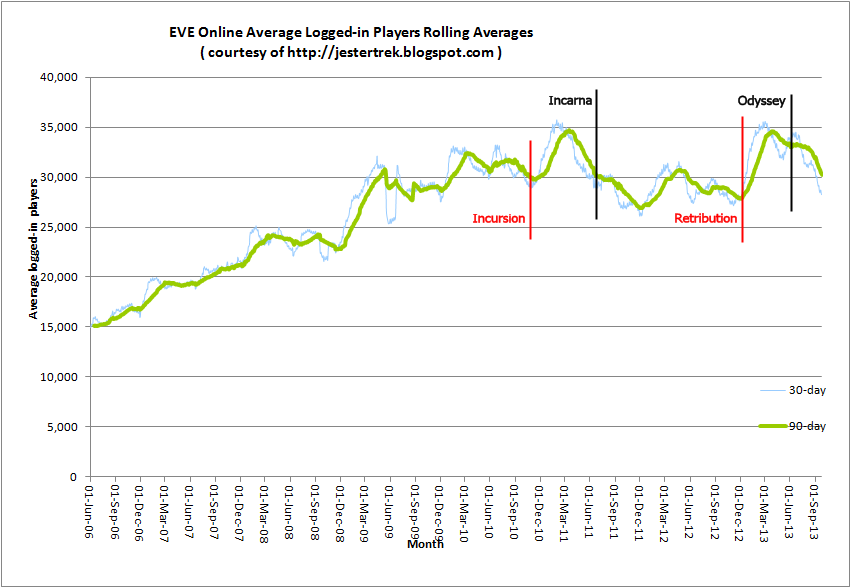 As I stated above, we're still more or less firmly trapped in the 30k logged-in player rut that EVE has been in for five years now.  I've highlighted four expansions in particular since they represent two attempts by CCP to break out of the rut.  With the release of Incursion in late 2010, we saw a content-driven expansion bring in thousands of new players logging in only to see that momentum dashed on the rocks of Incarna.  And now we see the player-driven expansion Retribution and its fantastic Crimewatch system not followed-up or capitalized on effectively in Odyssey.  The curves look different; people were asking "where the hell are the spaceships?" pretty frequently in the run-up to Incarna.  But the effect is the same: in both cases the 90-day logged-in player trend -- the thick green line -- starts at nearly exactly 30k both before and after these periods start and end.

What's it going to take to blast out of this rut?

We'll see where CCP is going with it and of course as a member of the CSM I've heard a few -- but definitely not all! -- of the plans.  But in public, the goal seems to get players to accept and embrace a long-term vision where each expansion builds on and capitalizes on the strengths of the expansion before it.  If the strategy succeeds, the data will show it starting now, late September 2013.  With that in mind, most long-term trends in my future Snapcount posts will start from where the problem started, with the release of Apocrypha in March 2009.

It's time to break out of the feast and famine cycle.


(1) You could make a meta argument about moons not being conflict drivers any longer, but I personally think it's far too early to make any judgments on that score.
Posted by Jester at 1:21 PM