Office chairs and other amusements

Before my full-on wrap-up post about the summit itself, I thought it would be fun to list a bunch of little vignettes, funny stories of things that happened while the seven of us were in Iceland.  Consider it a sort of summit junk drawer...

The problems with the video-conferencing system were entirely on the audio side.  For the most part, they were represented by a popping and clicking from the speakers that got progressively worse as the summit went on.  As it sounded more and more like a Geiger counter, we finally started joking that CCP didn't appreciate CSM8 and was trying to irradiate us...

The speakers were there so that remote attendees could ask questions.  Chitsa Jason gets the prize for most active remote participant, followed by Mangala Solaris, Sala Cameron, and progodlegend.  Without the speaker, their input was limited to text typed into either our Skype channel or the video conference chat system.  CCP Dolan and a couple of enterprising CSM8 members tried to bypass the video conference speaker with their own, always with disastrous feedback as a result.  I joked that one blast of feedback early Friday nearly pushed a very pregnant CCP Sunset into early labor...

One evening, Trebor Daehdoow and I were walking alone back from CCP deep in conversation about some strategic point when he started to cross the street at a newly green light.  I looked to my left and a large delivery truck was apparently ignoring the red light and rushing toward the CSM8 Chairman.  Fortunately, the truck driver finally realized his light was red, but until then I had an agonizing few microseconds at the thought of Poetic Stanziel or perhaps Dinsdale Pirannha accusing me of quite literally pushing Trebor in front of a truck to get his position...

There are free beverages and food in the CCP cafeteria for employees and select guests.  One of the food choices is a nice little yogurt product called Skyr.  It's yogurt in a plastic cup, covered in foil.  On top of the foil it includes a clever -- but very tiny! -- foldable spoon.  CSM8 member mynnna's reaction at the tiny spoon was priceless: a charming high-pitched giggle at the cuteness of the tiny spoon as he looked down at it.  You could almost hear the same giggle as he contemplates new Goon renters...  ;-)

Trebor got to describe the STV voting mechanic as "the most diabolical thing I've managed to do on CSM."  The quote is definitely going in the minutes.  It's also QOTW...

Several CCP employees are doodlers and would pull a pen and a pad of post-it notes toward them and doodle as they talked to us.  I collected a lot of the doodles.  Most impressive are CCP Rise's, some of which are positively artistic.  I took a picture of a few of his.  The one bottom right refers to one of Dolan's attempts to get the remote speaker working and generating a few blasts of feedback.  Rise held it up to the video conference camera... 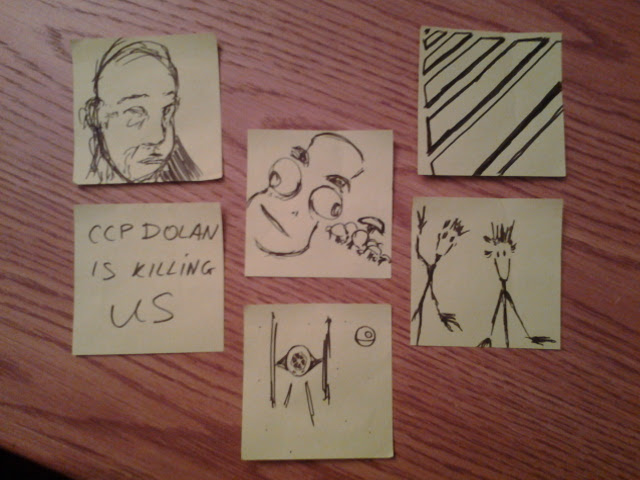 EDIT (2/Sep/2013): Oh, and before someone says that the doodlers weren't paying attention to us, quite the opposite.  Never once did a CCP employee, doodling or not-doodling, have to ask us to repeat a question or give any impression they weren't giving us their complete attention.  Some people are just good multitaskers, that's all.  Some of CSM8 were multitasking themselves.

CSM8 members continued to use the Skype channel to communicate between hotel rooms before breakfast, after dinner, and the like.  Given that only a third of us had working phones, it was a convenient way to coordinate.  The most amusing cross-hotel room conversation involved Ali Aras talking James Arget into going back out into the city late Friday night.  "You're gonna make me put pants back on, aren't you?" he complained...  ;-)

I usually have a really good sense of direction -- I walked three people brand new to Iceland all around Reykjavik on Wednesday without getting them or myself lost and without looking at a map once, for instance.  But I still managed to embarrass myself by declaring the famous hot dog stand was definitely in a direction I was pointing when it decidedly was not.  Sigh.  If it's any excuse, I had a couple of beers in me at the time...

Completely unrelated to CSM business, but I used the fact that I was in Iceland to promote CCP Guard as the new Master of Ceremonies for future Alliance Tournaments (after finding him and making sure he was interested -- he definitely is).  Turns out I need to mention it to one more person who was on vacation last week...

Apparently the Icelandic words for "apple" and "orange" are remarkably similar.  It was a coin flip that first morning at breakfast which button to push to get orange juice and which one to push to get apple (though I forgot to get a picture, damn).  Given the expression about comparing apples and oranges, I found the similarity really amusing...

Finally, I got a pretty good troll off on CCP Dolan on Thursday.  The chairs in Trinity are made of the same Icelandic foamed lava rock that Icelandair seats are made from.  After nine hours in such a chair, your back is complaining loudly and the material heats up and is very uncomfortable.  CCP Dolan, meanwhile, brought an ergonomic office chair into Trinity on Wednesday and was relaxing comfortably in it all day.  So Thursday morning, I appropriated his chair to my spot at the table and threw my coat over it.  He didn't notice and instead brought in a second ergonomic chair.  So I used his all morning.  At lunchtime I took his second one and gave it to Mike Azariah (who threw his coat over it).  Trebor demanded we steal the next one Dolan brought into the room for him.  By mid-afternoon though, Dolan figured out our plan.  The look on his face was both rather priceless and much cherished by the CSM members that saw it...

That's all.  As I said, one more summit blog post in a day or two, a wrap-up and retrospective on my thoughts about the summit in general.
Posted by Jester at 9:19 PM