Kill of the Week: Capital letters

As I've mentioned on this blog a few times, there are a small number of capital ships in high-sec.  And every once in a while, one of them dies...
http://eve-kill.net/?a=kill_detail&kll_id=20212352

They're sort of white elephants, really.  If you ever manage to get one, you're not allowed to sell it or trade it.  You're gently discouraged by the GMs from undocking in it, and if you do undock, you're not allowed to do aggressive things with it.  There's a constant pressure on you to either jump the capital to low-sec or allow a GM to do it for you.  Other than mine with it, there isn't much you can do with one.

So during a war-dec, the pilot of this one decided to undock with it and play station games.  Now in low-sec, such things are aggravating.  In high-sec, they're pretty well intolerable.  Apparently the corp involved in the other end of the war-dec petitioned the tactic, and the GM pretty well told the pilot in question "OK, time to move this to low-sec or else."  So the pilot in question decided to suspect flag with the carrier instead.

Before I get to the fight of the week, let's do some honorable mentions.

This Naglfar kill is kind of instructive.  The fit doesn't mean the Nag was being a real man and hull-tanking.  It means that this Nag had a carrier nearby and was refitting like mad off the carrier as he died, trying to stave off the inevitable for a few more seconds, perhaps giving a friendly gang the chance to save him.  This sort of thing is going to happen a lot more often once Rubicon drops...

Over-priced mission boats continue to die every single week.  I really have a hard time believing the word hasn't gotten out about this.

Marlona Sky is the well-known master of killing people in embarrassing ways with haulers.  The Nereus makes this a hell of a lot easier, I suspect...

Before getting to the good stuff, here's one from Serenity, the Chinese EVE server, sent to me by CSM8 member mynnna.  He was amused that Tranquility isn't the only EVE server where you can encounter ratting carriers in Deklein...  I suspect the ones on TQ aren't fit quite this expensively, though.

One more I almost forgot: the days of smartbombing fleets of mining barges is not dead.  But a big pile of Mackinaws is...

"Oh wow Jester, you're gonna be busy!" people have said to me a few times on weeks like this.  And I always respond "Nah, not really."  Big fights where supers get killed in large numbers are actually much easier for me than individual super ganks spaced out over the course of the week in ones and twos.  For those, I have to go out and try to talk to people about what happened... and usually they're extremely reluctant given that they just got smashed in the face.  Or the language barrier gets in the way.  Or they want to play a fun game of "troll the blogger" and see if I'll fall for some ludicrous story.

By comparison, a nice easy large scale battle where everyone knows what happened is much easier to deal with.

So this week, Black Legion lost 26 super-carriers to a well-executed trap set up by Pandemic Legion...
http://eve-kill.net/?a=kill_related&kll_id=20117446

BL (or as they asked to be called this week, bl) have had a target painted on their back since their record-breaking super-cap gank this past July that included the slaying of one of the few Revenant super-carriers in the game.  Indeed, I was told that many people cried "For the Rev!" in Local as the trap was sprung.  As I said in my QOTW article, you can read about the details on the EN24 or TMC articles I've already linked to the full story.  But in this case, the trap started with this... 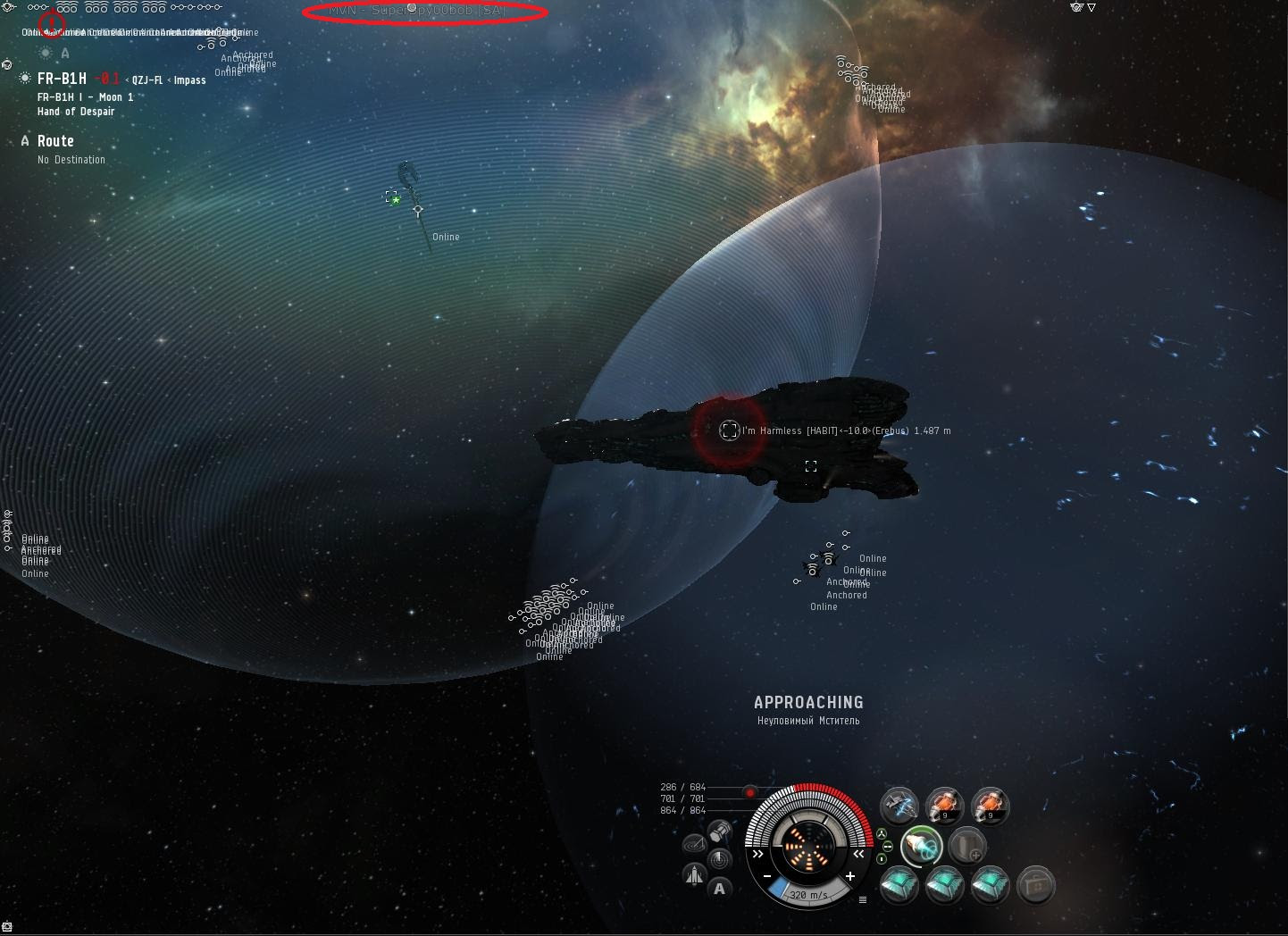 That's Makalu Zyra's Erebus, tackled next to a "hostile" POS.  This sort of pic is a common thing when you have a super tackled.  "Pics or it didn't happen!" applies to this situation as proof that circumstances are what you say they are.  BL fell for it, and began logging in its capital and super-capital fleet en masse.  What they didn't notice was that little bit of the picture circled in the upper left, indicating that the dictor pilot "tackling" the Erebus is on PL's Mumble server, using the Mumble overlay to stay in contact.

The rest is history.  Needless to say, this is a new record for supers lost in a single week since I started tracking such things 13 months ago.  No other supers died last week.  Hell, the only other things even vaguely expensive that were killed were a couple of jump freighters and this guy.

Oh, and while the main battle was going on, part of the PL capital fleet apparently missed its mid-point cyno and was stuck right where RAZOR Alliance could pounce on it with a dread fleet.  I hear that jumping eight or ten dreads within one jump of PL's active super-carrier fleet is a bad idea...

Congratulations on a stellar week to everyone involved in this super-sized super gank!  I can't help feeling a little sad about it, though.  This fight greatly reduces the chances of any sort of major super-cap battle going down in New Eden any time soon...
Posted by Jester at 7:30 PM