As I mentioned, I want to talk about EVE Vegas in the larger picture of What It All Means(tm)...

...but this is one of those speculative little posts that I write from time to time about CCP motivations.  Since being elected to the CSM, I've tried to be careful with these kinds of posts.  Of course since I'm on the CSM, I could just ask CCP's motivations about things.  But of course if anyone were to answer me, their answers would then fall under NDA and CCP would get to decide when and how those answers get communicated.  So instead from time to time it's more fun to speculate a little.

So that's all this is, OK?  It's speculation.  I'm allowed a few facts, of course.  Anything a CCP employee says in public -- at a Community presentation or round-table at EVE Vegas, for instance, or on the forums -- is fair game.  So let's start from there. 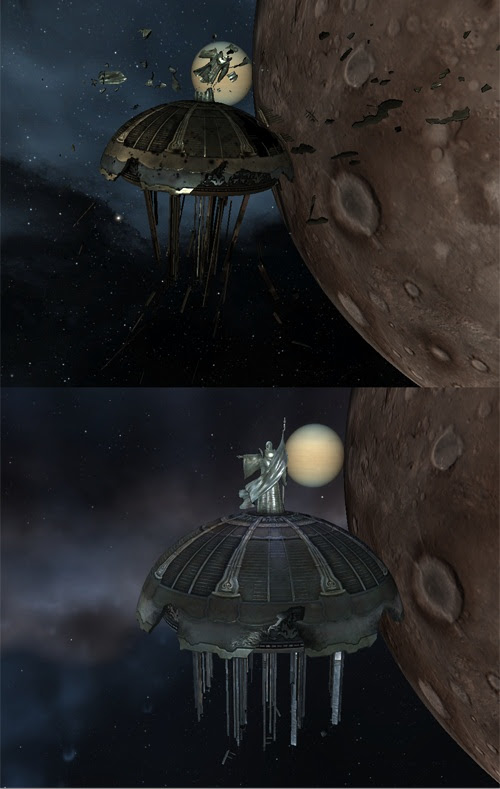 I was asked a really interesting question at EVE Vegas by a player, in essence: "Do you think EVE players shoot themselves in the foot by challenging CCP when they give things away to community organizers?"  I answered that in my experience, CCP takes player concerns seriously and in those few cases where those concerns are fueled by unjustified anger, the company tends to be very understanding and forgiving.  And when those concerns are justified, CCP has shown a history of listening.  Sometimes, getting them to listen requires fairly extraordinary efforts, but they do listen.

But let's come back to that.

It's been increasingly clear since Fanfest that CCP's Community team -- devastated by the October 2011 lay-offs, you'll remember -- has been very much revitalized.

At his Community Team presentation at EVE Vegas, CCP Guard had a little fun by showing off light-hearted pictures of members of the team, filling the screen with images two or three times over as each member's picture was overlaid on others.  Since Fanfest, we've seen the Community team do community spotlights, expand the roster of community fan-sites (and trim the inactive ones), work much more closely with player organizations and with the CSM, assist with more player-run events, and generally get much more involved with EVE players than at any time that I can remember since... since ever, really.

And now they're taking a much more direct interest in player gatherings, including making EVE Vegas tickets something that could be bought with PLEX and directly supporting the gathering with giveaways for the players that attended.  Guard also gave a long list of countries that the Community team hopes to help player gatherings thrive in.  Similar activities are happening within the DUST 514 Community team.

When you try something new and different that you haven't done before, you're of course vulnerable to making mistakes.  And now the Community Team has made what can only be regarded as a doozy of a mistake.  And here's the very same EVE player base that's benefited from their efforts jumping up and down on their backs and putting the team close to a siege mentality.

...and in the process, shutting down or delaying a lot of the plans that the Community Team had in play to help community organizations.  Guard also made it clear at the Community Team round-table that the entire team is heads down working the recent issues and will be rebuilding their plans from scratch before presenting them to the CSM and thence to the players.  In the process, I think it would be a little naive if you don't realize the plans for rewarding player organizations and gatherings will likely be scaled back.

That's where the question from the EVE player at the top of this post came from, and it was a good one.  Are EVE players shooting themselves in the collective foot?

Now do not get the impression that I'm using this line of thinking as some sort of justification for large in-game rewards for player organizations.  I've already shared my thoughts on that issue and those have not changed.  Nor does this mean I'm not taking the SOMER blink issues seriously and keeping an eye on CCP's response to it... I certainly am!  Think of this as a thought experiment.  The Community team is in a heads down reactive mode instead of a proactive mode.  They want to check their moves more before they make them.  Mostly that's a good thing and I support it.

But it also means a scaling back of the "crazy ambition" that CCP is trying to show this year in all of their endeavors.

One of the things that Guard brought up in the Community RT that I thought was very telling was that it was a conscious choice to profile Brave Newbies so early in their corp history.  "We're happy with how that turned out," Guard said a little blandly.  I should say he should be!  BNI's membership has grown by a factor of eight since they were profiled and they've become one of the largest corps in EVE Online.

When CSM8 was at the summer summit, during several of the sessions, we brain-stormed ways to get players more involved in some of the aspects of EVE's community.  How could CCP encourage players to assist with things like new player development or training, player guides or the EVEolopedia, or introducing more new players to corps that will make them long-term members of the New Eden universe?  And of course the idea of rewarding players that take these actions came up.  That falls right in the Community team's wheelhouse.

And right now all of that is on hold, and I think that's a real shame.  Again, I'm not defending the mistakes that have been made... this is just a thought experiment, remember!  But the question remains: are EVE players shooting themselves in the foot?  I think it's worth thinking about.
Posted by Jester at 11:40 PM