Fair warning: this is another somewhat philosophical post.  I seem to be in that kind of mood this week.

One of my favorite odd-ball sort of comedies is a little-known flick called So I Married An Axe Murderer.  It's basically this goofy little movie whose plot can be summarized in about two sentences.  It seems to have been made strictly to let Mike Myers pull together a lot of off-beat comic actors and let them have a laugh making a movie.  About a third of the movie's running time -- and I wish I were exaggerating! -- is devoted to red herring little scenes that don't have anything to do with anything.  I've referenced one of them here before: the tin-foil "Pentavarite" scene.  Another is a game played by a few of the characters called "What's worse?" where they try to gross each other out with two really unlikely scenarios and then laugh over which one is worse.

The first is known to anyone who has ever gone into Jita, the various scams that are repeated in Local a thousand or more times a day in the hopes that someone will fall for them.  This money-making method is so easy and so prevalent that even CCP grudgingly recommended it in one of their New Player Training Sessions as a way of making ISK.  I mean, all it takes is one of a hundred scams, and a bit of fluff software either downloaded off the net or something that comes free with a lot of keyboards.  This is one of those things that is technically against the EULA but which has never been enforced; CCP kind of turns a blind eye to it.

EDIT (14/Nov/2013): Just to be ultra-clear, it's the keyboard macro that's technically against the EULA, not the scam itself, which is perfectly legal.

The latter is far and away the most common way of running large numbers of identical ships and doing silly things with them.  I've referenced it here before as well, but it was brought to my mind again lately due to someone playing around with it smart-bombing anything that's been moving in Rancer.  More often -- quite often -- it's used to run whole fleets of mining ships or do PvE in high-sec.  This is another one that it could be argued is technically against the EULA -- you're technically modifying the way the client works -- but again CCP turns a blind eye to it.


So which is worse?

To my mind, Jita bots are worse... much worse.  I mean, if you're using ISBoxer at least you're out in space, right?  As a player, I can do something about an ISBoxer if he annoys me enough.  Against a Jita spam bot, all I can do is go for the "Block" feature.  And that feature is only good for the character that uses it.  So yeah, Jita bots are worse.

CCP's security team apparently agrees because CCP Stillman and CCP Pelligro made themselves known in Jita yesterday and seem to have nuked everything that looked like a spam bot from orbit...  The impact, as measured by Chribba's tool which tracks conversations in Jita local, was rather striking (his graph, not mine): 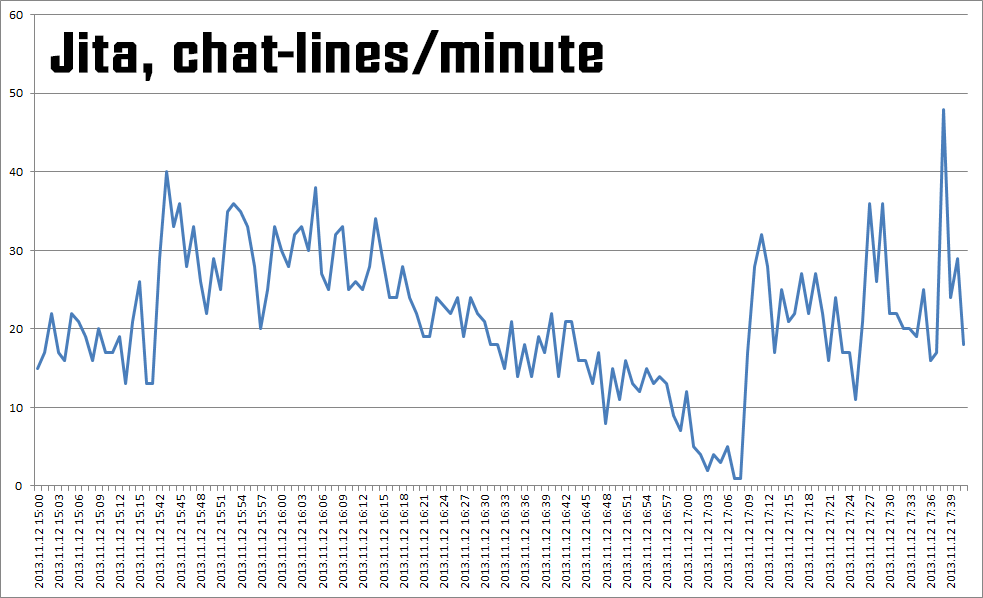 So here's the philosophical bit: over a loooong period of time, I think we're seeing two trends out of CCP:
Now if I'm right about this, the smiting of the Jita bots is but a single, very minor, data-point.  But it's kind of an interesting data-point and it'll be worth watching to see if it's joined by others.

In the meantime, over the course of the day today, a new crop of Jita bots -- or, you know, something that looks and acts exactly like Jita bots -- are slowly making itself felt.  Let's see how long they last.
Posted by Jester at 6:16 PM