Kill of the Week: Bad week for titans

Let's start here for a change because last week was actually quite interesting from the perspective of lost super-caps. The fun started with this Nyx, lost by SOLAR FLEET in Immensea. As far as I can tell, this looks like a pretty straight-forward case of a guy that used his Nyx to hot-drop carriers and was known for doing so. I haven't had cause to mention it for a while, but it doesn't do to become too predictable in the user of your super-carrier. That rule is still true. The guy got the carrier he landed on, then a bait Thanatos was prepared for his entertainment. Not sensing the trap, he dropped on that one, too. That was the signal for hot drop o'clock from PL. Entertainingly, the Thanny dropped a mobile depot, refit warp core stabs, and warped away from the Nyx's tackle! Cute! EN24 has a good version of this story if you want more detail.

Next up were a pair of titans lost about 12 hours apart. First up was this DARKNESSdot Leviathan. This one is pretty straight-forward: it fell to a bait carrier. Intending on a drive-by doomsday, the Lev was brought in by a DARKNESS sub-cap fleet to provide a quick kill. But the bait carrier cynoed, brought in a Nulli Secunda fleet, and they did for the titan. Both news sites covered it, but EN24 has the better version of this story.

Then came this Erebus, in low-sec Metropolis. I've written about this one already, rather extensively. I have no doubt that it's been reimbursed by now. For obvious reasons, this one's the kill of the week.

Next up was this ratting Nyx killed in Oasa. The circumstances of this one are kind of unusual (for a change). If you want the full detail, TMC has a well-researched story on it. Short version, the players involved used a wormhole to smuggle dreads into a cyno-jammed system. They waited for this ratting Nyx to appear -- he seemed to feel safe ratting even with a neutral alt in system -- then bagged him. Good show!

Next up another Nyx, this time caught in The Citadel low-sec. It's a pretty straight-forward catch and gank of a L5 mission super. The entertaining thing is that the pilot had the wrong fuel in his fuel bay so even if he'd had an emergency cyno (seems unlikely), he wouldn't have been able to jump to it.

And finally, just before the week's deadline, this Avatar went down in low-sec Verge Vendor. This one is a pretty routine "lost due to being dumb." Short version? Titan stayed in space uncloaked long enough to be probed down. Shadow Cartel bat-phoned to provide DPS. But the true credit for this one goes to The Tuskers who spotted it. More detail on this one can be found at TMC.

Not a bad week! And the fun hasn't stopped with three supers dead already this week, but I'll cover them next Tuesday.


Just a few honorable mentions this week. That starts with this Mobile Tractor Unit, which someone in Goonswarm dropped into one of the big fights this week in G15Z-W. It merrily did its job for a while before a Nulli carrier saw it and decided to kill it... for a nearly one billion ISK kill-mail. Hee!

Speaking of expensive structures, here's the most expensive SMA loss I've seen so far, some 12 billion ISK killed by a lone carrier. The drop is pretty freakin' outstanding, and fortunately there was a carrier right there to do a pick-up so I assume most or all of it was recovered. ;-)

Finally, an alert reader sent me this Providence kill in high-sec. Not a war-dec. Not a gank. Just a pilot with a kill-right that was activated... for 0 ISK. Instant suspect freighter. Nice! For those who haven't seen one, here's what a "kill rights" kill looks like when you view it in game: 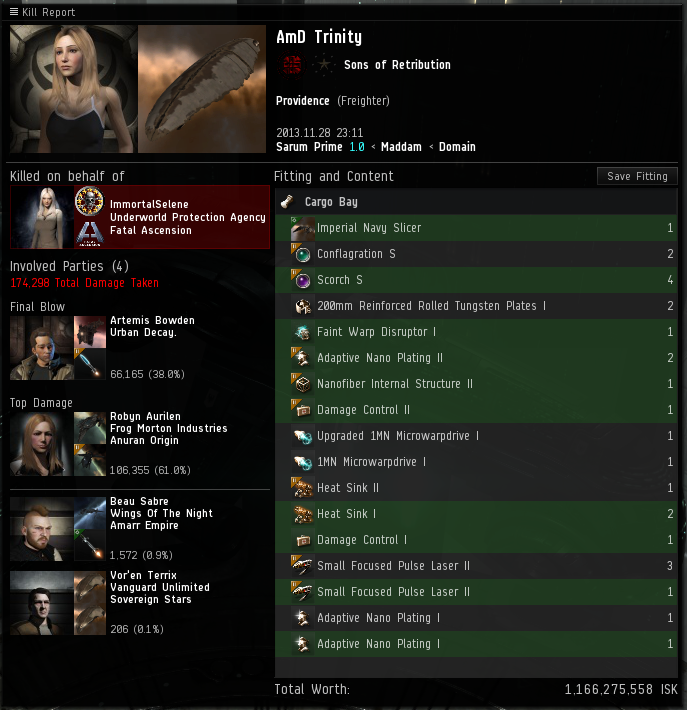