In the three years I've been writing this blog, I can only remember a small handful of posts I've written about stuff that I'm training on Ripard or how he's doing as a character. This just ain't that kind of blog. Still, I passed an interesting milestone while out on the holiday break and it seems fitting to share it:

He now has:
In terms of being a sub-cap combat character, the only things he's missing are:
All in all, a pretty significant milestone! Ripard's currently sitting at 114 million SP. It's been quite a long road! Here's what his SP graph looks like at the moment for those of you that enjoy them... 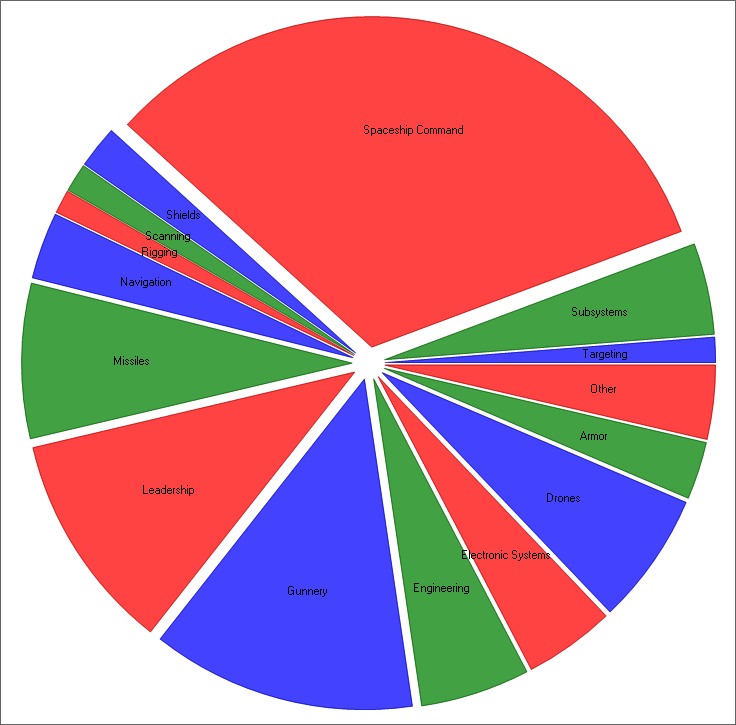 Point of interest a few of you might find amusing: Ripard has 26k SP in resource processing (24k of them in Salvaging), 250 SP in production (not 250k, 250), and two skills trained in Science (the namesake skill and Graviton Physics). Ripard isn't exactly an industrial character...

By early summer, I'll have closed the gaps in the few support skills and support ships he's missing at which point I'll have a pretty significant choice to make: branch him into capital ships (I already have three heavy-skilled capital pilot alts at this point), expand his support skills to include things like blockade runners (ditto), or start selectively training some really specialized stuff to level 5 (such as Medium Railgun Specialization and Heavy Assault Missile Specialization, for instance). So far, I'm leaning toward that third option but I have until June or so to decide.

Anyway, just a one-off that I thought I'd share. Bring on the next Alliance Tournament; Ripard can fly anything! ;-)
Posted by Jester at 8:45 PM