2013 has been a year full of controversies among the player base both small and large and I want to wrap up my commentary on a couple of them before the year ends. With that, let's talk about EveCorpration1231533.

You see, a few months ago the CEO of Blackwater USA Inc. -- a member corp in Pandemic Legion alliance -- contacted me to let me know their corp had been renamed by the EVE GM team, their name having been "deemed offensive." Would I be willing to get involved to help them out? 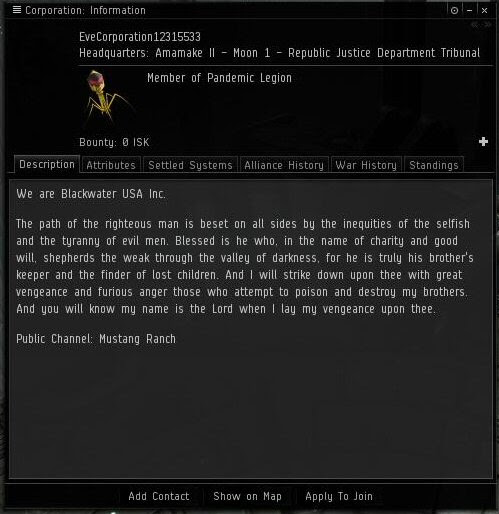 Now this is a situation that CSM members dread. Other than the NDA, there's no formal "rules briefing" that you get as a CSM member. But I was told informally by any number of people both before and after I was elected that CSM members are discouraged in the strongest possible terms from getting involved in the player petition process and anything associated with it. And after thinking about it, I decided this was a good idea. While the CSM exists to support the player base as a whole, little or no good can come from CSM members interfering in situations affecting a single customer, or a small group of customers. CCP has to be free to run their individual player relations as they see fit without showing bias or favoritism. So when individual players come to me asking me to get involved in these kinds of situations, 74 times out of 75, I have apologetically said that I cannot.

But this one cut kind of close to home.

I've worked with a lot of members of BUSA before when I was a member of Gentlemen's Club alliance. More than that, I had flown with them, and knew a few of them personally. This was a situation that struck me as rather unjust, just on the facts of the case. And I'd been interested in writing a piece about how unevenly applied the GM's policies on name impersonation are. And I'd been dying to write a piece about the transparency of this process. The situation struck me as a good opportunity to kill a lot of small birds with one stone. I could write a piece about the process without getting wrapped around the axle of this one particular case. So I went out an interviewed a number of people about the issues involved (including CCP Manifest and members of the Community team) and I wrote my piece. And I was happy to see it was well-received. It was one of those journalistic little pieces that looks easy but was much harder than it looked because it had to operate within a lot of tight constraints.

About a week after the piece went public, BUSA got their name back thanks to the intervention of senior members of the GM team and the Community team. Cooler heads prevailed in that situation and I'm really glad for it. Sometimes CCP does get it right on the second iteration after getting it wrong on the first. We as players sometimes don't give them enough credit for that.

But the transparency/consistency issue does remain. CCP's most recent annual stockholder briefing book includes the following text about one of their cornerstone principles, transparency:


We earn trust through honesty and openness. We are open-minded and respectful of our customers and co-workers. We confront problems directly and discuss issues in a straightforward manner.

Like many corporate mission statements, these are words that often have a lot more to do with CCP's actions in an ideal world as opposed to the real one. As players remind CCP again and again, actions speak louder than words.

As part of the research for the original piece, I started two side bits of research:
What I collectively found out was that the process continues to operate on a case-by-case basis specifically without transparency. And that's a real shame.

Lots of players sent me lots of stories about corp, alliance, and character renaming. Of course many of those were focused on individual cases that were hard to judge. But over time a pattern emerged and it was obvious that the quickest way to draw the ire of the GM team on this issue is to have a corp, alliance, or character that seems to support three things: rape, racism, or Nazi Germany. That of course is not very surprising. But issues of real world trademarks, real world criminal groups, famous in-character player names, or even the real world names of CCP employees generally draw lesser or no responses.

When the CSM met with CCP CEO Hilmar Petersson at the summer summit, I teased him that I'd encountered him in New Eden. He laughed.

As to my list of 15 corps named after terrorist groups, criminal organizations, and real-world corporations collectively responsible for the enslavement or death of thousands of people... corp and alliance names I personally found offensive? It's been more than two months. None have been renamed.

So for the time being, the status quo remains. I'm glad that BUSA got their name back but the process that prompted them to lose it in the first place is no closer to being made more transparent.
Posted by Jester at 5:22 PM