Another way of saying "never"

Kirith Kodachi has a new blog banter out, and it's a subject near and dear to my heart. First, he points out the 30,000 logged-in users plateau that EVE has been on since March 2009, nearly five years ago. Then he jumps to the meat of the question:


Is there any path for CCP to follow to raise those numbers upwards for a sustained period, or is EVE going to enter a decline to lower logged in numbers from this point? How soon will we see an end to this plateau? Months? Years? Or will you argue that 'never' is a possibility? Or you can look at the root causes of the plateau and tackle the question if it could have been avoided or shortened if CCP had taken different actions in the past.

Ok. I'm going to give this topic a somewhat more cynical treatment than I've done in the past.

As frequent readers know, for the last couple of years I've been running a little program that tracks EVE's logged-in user count and gives me running daily averages. It's a fun tool for my occasional posts on the subject, for watching live events happen(1), and for other such things. Two or three times a year, I pull out the data, dust it off, and look for any conclusions that can be drawn from it. I last did this back in September. In that post, I bemoaned a tremendous lost opportunity. Following Retribution's masterfully-designed bounty system, EVE's logged-in user count had hit a sustained peak of 34k, an 11% increase over historical values. What's more, it was holding that value over the course of several months! It was all on the Odyssey expansion to build on that plateau. We were in danger of finally leaving 30k behind.

And then it all fell apart. Here's the full year view. 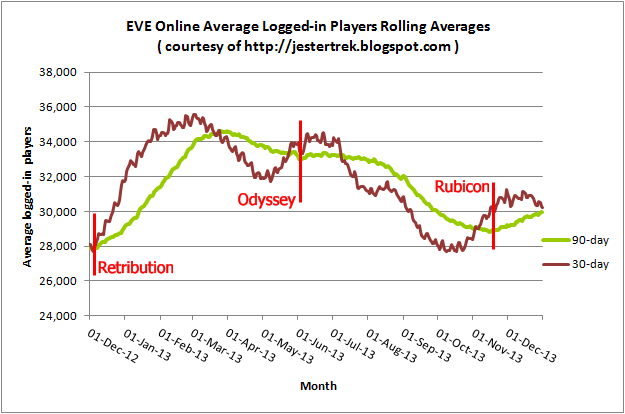 I've picked up the graph from the release of Retribution on 4 December 2012. Look at that mountain rise in its wake! For this particular metric, Retribution stands as the most successful expansion CCP has ever released for EVE Online. After that, though, you've got brief spikes for the release of Odyssey and its point release later that summer. Then a massive summer slump. Then Rubicon rescues things briefly, doing more good with the promise of its release than the actual release itself, a pattern that was also seen with Odyssey.

The graph ends on 1 January 2014, but I don't think it takes a genius to guess where we're probably headed over the next few months. Hint: have a look at the Odyssey graph for the same period after its release.

I'm becoming increasingly of the opinion that the problem with EVE isn't a lack of marketing. I'm coming increasingly to believe that people have heard of EVE. People have read about EVE. People have tried EVE. People have played EVE. For a game of its particular size, EVE is one of the most written-about games in all of gaming. Enough digital ink has been spilled about EVE Online to fill several convenient hard disk drives. That isn't the game's problem. Hell, in talking to gamers outside of EVE's community over the last few months, the most common thing people have said to me is "EVE is way more fun to read about than to play."

EVE's problem is that most people who try EVE and play EVE eventually decide they don't like EVE. And as a result, CCP is getting further and further locked in to a marketing strategy of selling the game to the same block of customers that have given them money at some point in the past. Meanwhile the customers themselves are getting locked into a strategy where they try the new expansion if it appeals to them, they get bored with it, they unsubscribe and play other games for a while, a new expansion comes along that piques their interest, and they subscribe again to try it out. Then they get bored with that one too and the cycle repeats.

CCP Seagull is trying desperately to break out of this cycle with a big swing-for-the-fences play... but I'm no longer convinced it's going to work. Matter of fact, I'm becoming increasingly convinced that it's not going to work.

Yeah, I warned you this was kind of a cynical view. Sorry about that.

Anyway, as long as EVE expansions are geared to sell the game to the same flock of existing and former customers, I personally believe EVE is never going to break out of that 30k plateau of logged-in players. What's more, I'm also coming to believe the vast bulk of EVE players don't want it to. I think the bulk of you out there are perfectly happy knowing who all the big groups are, who the important players are, and what to expect out of your game other than a few new major features per year, from now until the end of time.

Or at least until the next internet spaceship game comes out, whichever happens first.

Where did the plateau come from? A new and unpleasant theory has been building up in the back of my head to explain it. But that theory needs a while longer to cook. Stay tuned for that... eventually.

Thanks for the blog banter question, Kirith!