Blue is the warmest color

Second bookmark I want to put on today, 18 January 2014, centers on this agreement.

In the CSM Minutes, you'll find the CSM being initially informed of CCP's intent to put players in control of high-sec POCOs. I immediately raised the concern that the biggest entities in the game would take over all the POCOs worth anything and then would hide behind the inability of anyone else to war-dec them effectively (it's on pages 41 and 42):

The Minutes don't show what the video conference recording shows: me shutting up and shaking my head. ;-) CCP SoniClover, how did that whole "POCOs around Jita will be hotly contested" thing end up working out?

In the last couple of years, the concept of a "conflict driver" in EVE has come to have less and less meaning as out-of-game treaties and agreements have come to govern the control of the money-making constructs in EVE. Moons and home region sites, incursions and now POCOs, are managed by gentleman's agreements and handshake discussions and outright treaties that basically come down to "these two are yours, these three are mine, and let's agree not to mess with each other's money-makers." Non-invasion pacts and blue lists have become the norm, as player social agreements have grown from corps to alliances to coalitions to now... whatever this B0TLRD treaty is. We're gonna need a new word.

Reading it, I was unmistakably reminded of Londo Mollari and Mr. Morden dividing up the galaxy between the two of them on Babylon 5. 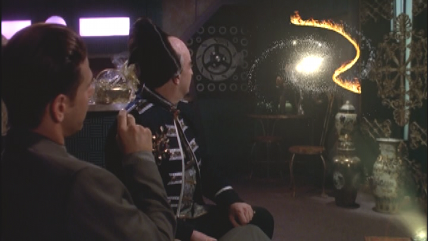 The rest of us? Bad at EVE and therefore irrelevant. In any event, the treaty does make it pretty clear that the two of them may need to join forces to wipe out any of the rest of us that seem inclined to get uppity and forget our places. In short, it's an blue agreement for which the word "coalition" isn't blue enough to describe.

But really, all of these agreements come down to one thing: rather than fighting over the sources of ISK in EVE, let's just split them up in some "equitable" way between the "relevant" players in this game and bring in ISK by the tens of trillions until Dr. EyjoG starts to weep!

It's a good enough goal for those lacking a better one, I suppose.
Posted by Jester at 2:49 PM