He's found a way to copy himself

Now that I've outlined the model that I want to use to talk about alts, I want to take the model out for a spin... see what it can do. As a reminder, everything starts with you this little diagram laying out skill point distribution for characters in EVE: 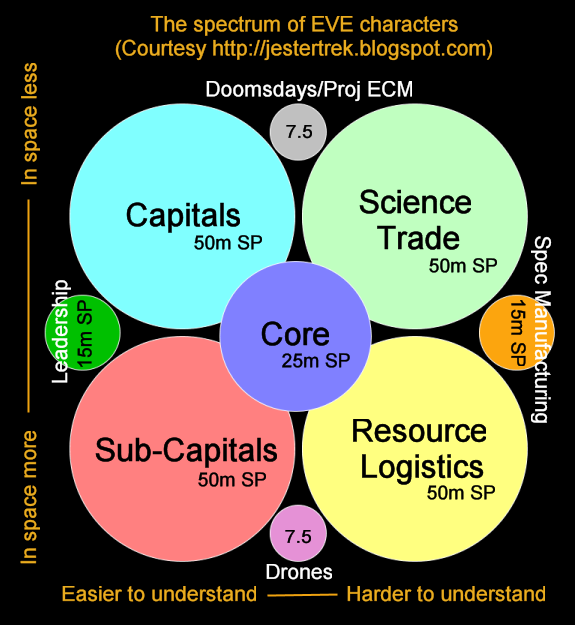 Remember, part of my thesis is that all characters in EVE start as one of four things: a sub-cap pilot, a resources/logistics pilot, a science/trade character, or a capital ship pilot. How the characters advance from that point is what defines them and usually what encourages an individual player to acquire an alt or two.

Before I continue, I do want to make one thing clear: when I say "alt", while I do include sub-1m SP characters such as cyno alts and the like, what I really mean are alts with a larger number of skill-points. In EVE, some players including myself talk about the number of "mains" we have and honestly, those are the "alts" that I'm talking about. I haven't met an EVE player yet that doesn't identify most strongly with one of his characters over all the others. When I say "alts", I mean all those characters you possess that aren't that one.

One other thing: this is a good point to explain half the gold text in the model, the text on the left. That specifies that capital ship pilots and characters that specialize in science and trade are "in space less" whereas those who specialize in sub-caps, resource-gathering, and logistics are "in space more." Hopefully, this will be fairly self-evident. The latter two careers require that the character be logged in and undocked in order to do much of anything. On the other hand, capital ship pilots and station traders (for instance) will be in space much less often (or not at all) and might not even be logged in.

Over the years, I myself have varied between two and four "mains" with a smattering of what I'd call less primary "alts" behind them. At the moment, I consider myself to have four mains. If I were to break them out using the model above, they'd look like this (skills for each outlined in red): 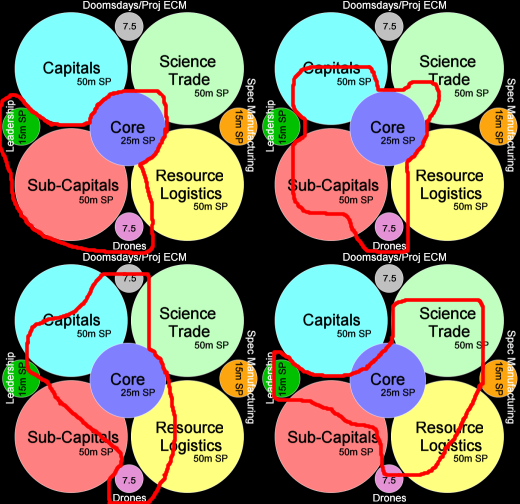 Taken independently, each of my four mains has strengths that the other three do not have and weaknesses that the others close. But taken together? I almost have one well-rounded EVE character. ;-)


And as I mentioned last week, that's a big reason why alts happen. In every case where I myself created a new alt, I created it to deal with perceived inadequacies with my existing characters. I created an alt to have a PvP character, then created a second alt to concentrate on battleship PvP, then created an alt to break into manufacturing, created more alts because I realized I'd need to research hundrds of BPOs in order to do manufacturing, then created more alts to sell the products I was manufacturing so the prior alts could concentrate on developing skills to research and invent from other BPOs...

...and before I knew it I had an army of alts on multiple accounts.

But I want to break that out a bit more, too. Because I'm deliberately avoiding an important aspect of this discussion.

EVE is nearly unique in gaming in that you are rewarded for time not spent playing. There are very few other games out there built on that concept, and most of them consciously or subconsciously imitate EVE's model (such as DUST 514 and Perpetuum Online). In most games, you gain skills either from using those skills or at least from playing the game to build up points or time or credit or something similar with which to purchase the skills you want. But it's participation within the game that's rewarded.

It is this -- the ability to skill up characters that you're not actually playing -- that makes alts in EVE possible.

And if that's all there was within the game, then I suspect that alts in EVE would be a curiosity... a somewhat rare one, perhaps representing 10-15% of EVE players out there. What makes the difference? PLEXes make the difference. If every alt account had to be purchased with cold hard cash, there wouldn't be nearly the number of alts in EVE as there are. With a PLEX... with the ability to pay to train alts using in-game currency, suddenly the ability to have entire armies of alts at your beck and call -- all with unique skills -- became possible.

I personally know EVE players that have 30+ accounts. Would those people be walking around with that many accounts if they had to pay for every one of them? It seems unlikely, at least to me. ;-)

The ability to skill up characters that you're not actually playing makes alts possible. PLEXes, though... PLEXes make alts inevitable.

I don't have hard data to back this up... I'm not even sure CCP does. But I'd be willing to bet that the average number of accounts per player sky-rocketed after PLEXes were introduced. When I ask players who have lots of alt accounts why they have them, the discussion invariably finds it way to "...and these two (or three, or four) accounts, I pay for with PLEX." Only rarely do I find a multi-account player paying subscription fees for more than their second account or so.

That of course doesn't mean PLEXes are bad... far from it! At this point, I doubt CCP could get along without the healthy PLEX income from the armies of alts that many of us have.

So we go back to my theme statement:


Alts in EVE exist because of the fundamental nature of the game and will never not be a part of EVE Online.

At this point, I feel like I've proven the theme statement true. But is it RIGHT? I'm not through yet, but this seems like a good point to pause and take a deep breath before the plunge into the really meaty items surrounding this topic. Thoughts?
Posted by Jester at 4:12 PM