And the final bookmark for today, 18 January 2014, is a short one. Specifically, it's a reference to the bad old days of the introduction of Time Dilation two years ago this month. Just a couple of months ago, I wrote a longer piece about TiDi in which I said...


TiDi is a brilliant band-aid and for now, it's still holding the wound closed. But yeah, we can now see it's not going to hold forever.

As of January 2014, it's no longer holding the wound closed. The wound is reopening and it's starting to bleed. Yeah, I want to talk about HED-GP a little. 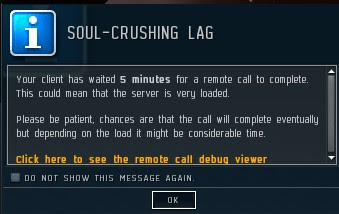 Thousands of people piled into HED-GP for the timer today and every report I've heard from the fight indicated that the bad old days of 2012 have returned: ships trapped in warp tunnels, ships subjected to random effects, ships unable to cycle mods or launch drones, ships apparently operating in space while the pilots of these ships received notification that their ship was dead, fleets ordered not to jump in to prevent them from suffering these ill effects.

And of course, ships that already held the field having a significant advantage over ships trying to enter the field... one of the major things that TiDi was introduced to the game to prevent.

The fight itself was a demonstration of where sov fights are in EVE these days: dozens of titans, hundreds of super-carriers, hundreds and hundreds of Archons and Chimeras, and a number probably not all that short of a thousand dreadnoughts either in the system or trying to jump into the system.

Welcome to sov fights, circa the first month of 2014.

So yeah, as I've mentioned, the CSM requested a session on "The Future of Big Fights in EVE." CCP bought themselves two years with the last band-aid, and I know there have been plans to address this problem further. But I don't see the fights in EVE getting any smaller, do you? I mean after all, even a relatively small event in EVE now features some 1200 pilots (and TiDi, and lag!) in a single system... a fight size that would have been a major event in 2012. Now this size fight is relatively routine. And yet it still causes problems.

What will a "big fight" in EVE look like two years from now?

EDIT (19/Jan/2014): CSM8 Chairman Trebor Daehdoow wrote a long piece on this topic. Go read it! It's worth your time. I'm trying to talk him into a second piece with some of his ideas about how to address this long-standing problem.
Posted by Jester at 11:29 PM