Blue and amber, white and green

For the last four of five days, I've been hinting about Rote Kapelle news. We've managed to keep it fairly quiet. Rote Kapelle, and its central corp Stimulus, are giving up on the 15 man fleet meta and on the Syndicate region. We've completed negotiations with CVA to join Provibloc as an associate member. As you read this, we've already moved out of TXW-EI, our home system for the last several years. We'll be moving into the Provi/Catch area shortly.

And so I take my place as literally the only CSM member not KOS in Providence. ;-)

I'm not going to try to speak for the entirety of Stimulus leadership on the reasons why. STIM has always operated as a benevolent dictatorship, with a single leader and a sort of Game of Thrones style "small council" of directors to provide advice to that leader. I was recently invited to join this group and I was one of the members that advised this move. So while I cannot speak for the other directors, I can give you my reasons. They can be summed up as follows (and keep in mind that all of these are my opinions):
I'll address each of my reasons in turn.

I covered the reasons why I believe the null-sec 15 man gang is dead or dying in my post a few days ago. Some of you took that as an "EVE is dying!" sort of post which I assure you it was not. EVE is changing, but that isn't the same thing. For a while now I've been in a position that I could gently tease people whose only view of EVE's smaller groups was "Make some friends! Be less bad!" With every other group in null-sec now following this philosophy, we have little choice but to do the same. I'm sad about the loss of this game play style and one of the things I'll be looking for in other games this year is the possibility to ply that trade elsewhere. But in no way do I think this means EVE is dying. Rather the opposite: big fleets are clearly good for the game. In the meantime, we're a relic of EVE's past and it was time to change that. 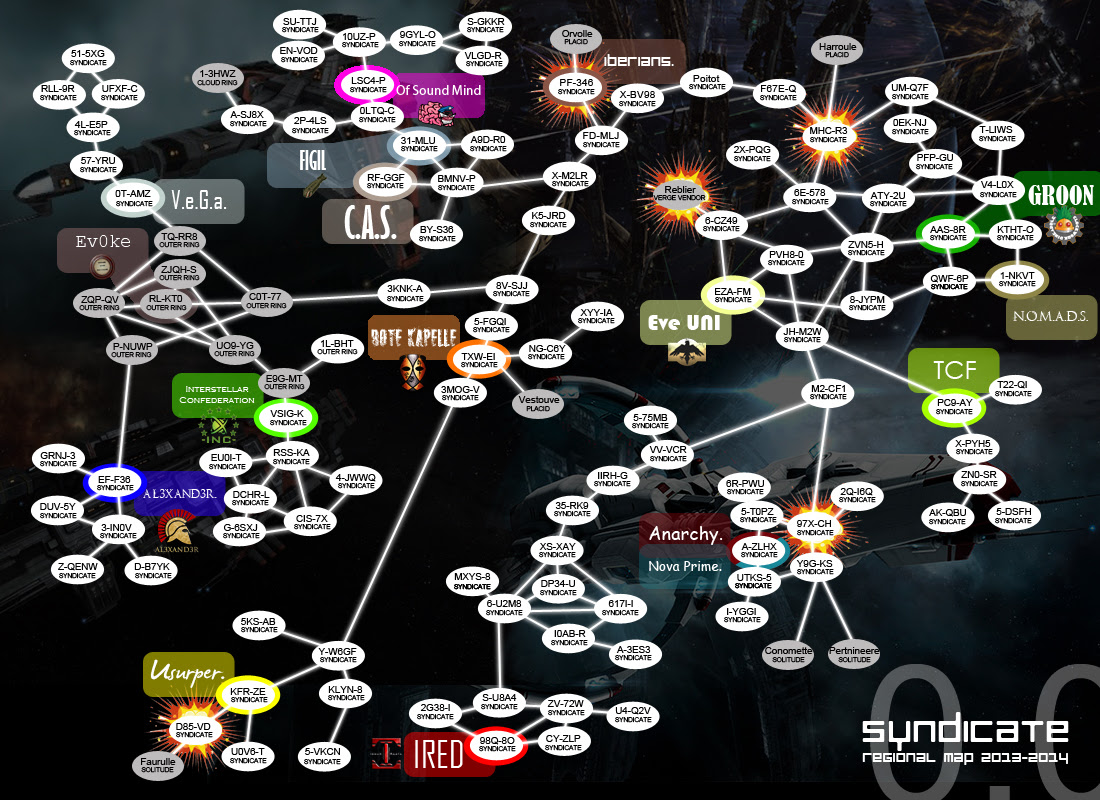 But these changes have caused most of the groups in Syndicate to rally into "mini-coalitions." This is not necessarily a bad thing. However, the "culture" of Syndicate has always been rather abusive and suffered from the fact that most entities in Syndicate poach members from other entities in Syndicate. When such a poaching happens, the departing member invariably believes this will mean the instant decay and death of his former organization... and says so. This increases the abusive nature of the Syndicate culture to the point where it has become toxic. The Syndicate thread on Failheap Challenge is nearly without value, members of various organizations spending their time sniping at each other instead of taking any positive actions. The thread can go days or weeks between actual valuable content such as battle reports. The FHC admins, previously over-moderating this forum, have stepped back too far and the thread now goes completely unmoderated.

These two reasons were enough to turn my eyes outward. But assuming I wanted to remain in null-sec, where to go? That meant I was facing the map I've been posting frequently for the last couple of weeks. And if I wanted to remain in null-sec, I'd have to choose: blue or amber, white or green? Join the CFC? Join PL or N3? Join one of the few large independents left such as Black Legion? Or join Provibloc? 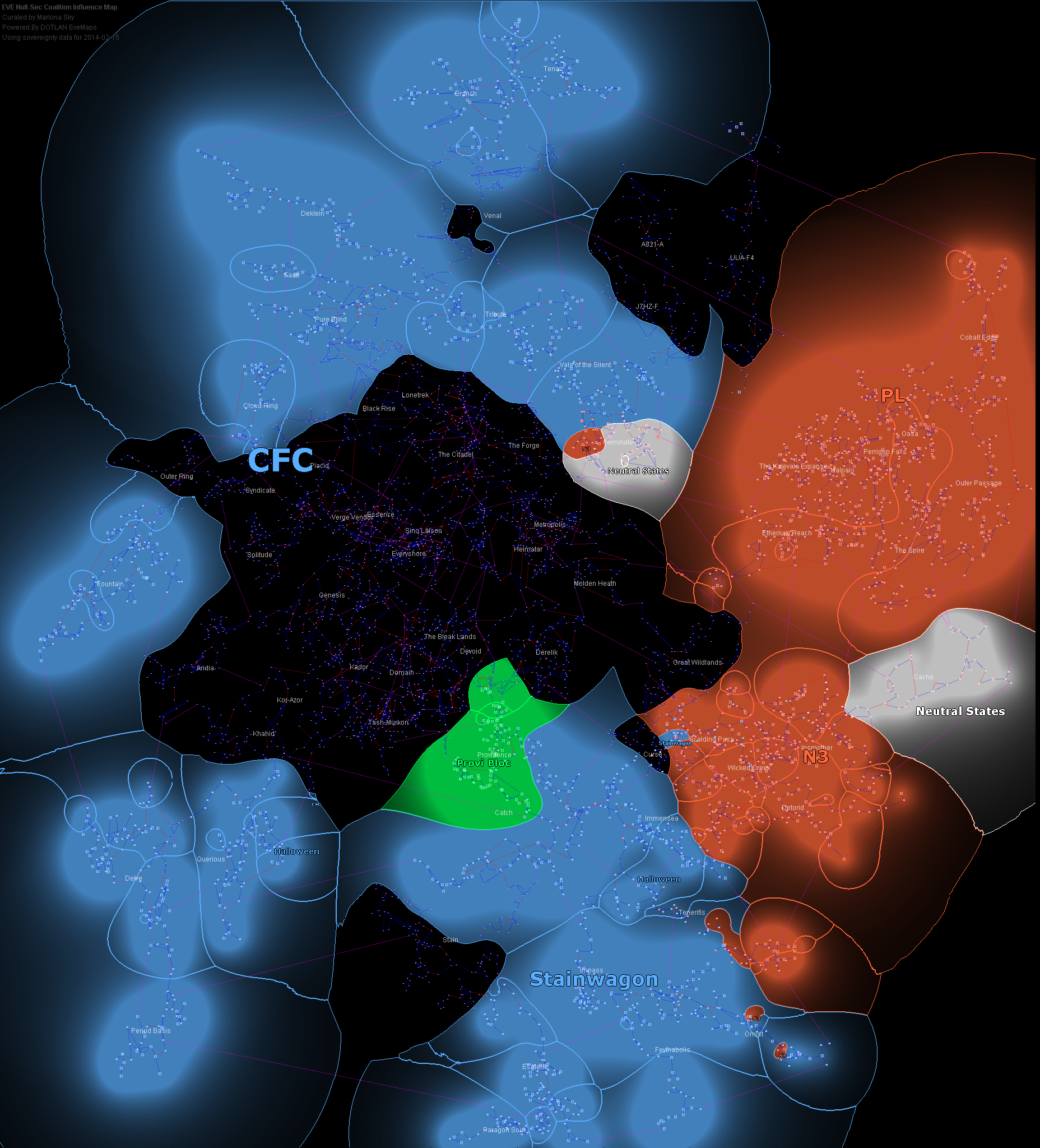 Contrary to popular belief, I really am not much of a "grrr Goons" guy. I bitch about their leadership and strategy from time to time, sure. But the fact is I know a lot of people in both the GSF and the CFC and they're good people. Matter of fact, I can't think of a single Goon that I dislike. If I wanted in? Ripard is notorious, sure, but I have three other more obscure mains and a SA account. Still, that does not mean that I wish to play the game the way Goons or the CFC play the game. What they do and the play-style they promote simply does not interest me right now.

When I look at a 21-hour battle like B-R, while I appreciate all the good things it does for CCP, there's absolutely no way I'd want to participate in it myself. There is no recreational activity in this world that I want to do for 21 hours straight. Hell, there are few recreational activities in this world I want to do for six or eight hours straight. Sure, there was a time I could do 12-hour marathon sessions playing a video game. But that time in my life is over. Even if it were not, at 10% TiDi that 21 hours represented 2.1 hours of actual game play. Do I want to play a game where I have to wait two minutes to lock a target, 15 minutes to kill it? Not just no, but hell no.

That pretty handily eliminated blue and amber, and most of white including Black Legion. While Goons don't have mandatory CTAs for the most part, N3 generally does and BL definitely does. And I don't speak Russian. ;-) And all of them participate in this game play style that I have no interest in.

And that turned my eye toward green. Provibloc has a number of advantages for Rote Kapelle and Stimulus at this time:
Short version: we feel like we can create content for them. We feel like they can create content for us. And it will be incredibly nice to live in an area that's a little less toxic. In the meantime, we can learn more about the 40 man meta and build up our base some while still keeping to our core principle of being in space, being excellent at it, learning from our mistakes, and applying the lessons we learn.

So farewell, Syndicate, and thank you! As my alliance-mate RuriHoshino put it...


It's been fun. Thanks to everyone in Syndicate who, during our time there, worked to make it one of the weirdest places in space. We may be separated by these computer monitors, but the time we spend together is real, whether it's shit-posting, ship spinning, roaming, dunking, or getting dunked. I hope you all find the fights you're looking for.

On to the next adventure! See you around the south!
Posted by Jester at 9:58 PM